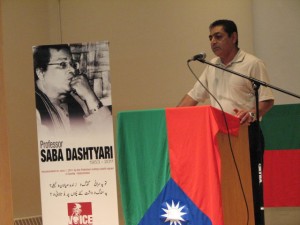 Baloch Human Rights Council (Canada) and the International Voice for Baloch Missing Persons (IVBMP) held a joint memorial reference event for Prof. Saba Dashtyari who was murdered in cold blood on June 1, 2011 by the Pakistani military death squad in Quetta, Balochistan. A diverse group of people attended the event at the North York Civic Centre from communities including Baloch, Sindhis, Kashmiris, Ahwazi Arabs, and Turkoman to pay their respects to the revolutionary scholar, Prof. Dashtyari.

The memorial event began with a moment of silence to respect and contemplate on the struggle and the ultimate price Prof. Dashtyari willingly paid for the freedom of his people from occupation and repression. Secretary General, BHRC (Canada), Mohammad Ali Baloch presented the audience with patriotic Balochi poetry and conducted the deliberations for the evening. Speakers praised Prof. Dashtyari for his life-long contributions in promoting Balochi language, culture, and heritage, and saluted the fallen hero for his unwavering commitment to the cause of his nation’s freedom from the yolk of slavery.

In his opening speech, Zaffar Baloch, President, BHRC (Canada) shed light on the life, struggles of Prof. Saba Dashtyari, and informed the audience about the ongoing dire situation in Balochistan that played a pivotal role in shaping the martyred scholars political perspective. (Click here to see the full text).

Humaira Rahman of the Toronto-based Sindh Resource Centre lauded Prof. Dashtyari for his courage and intellectual depth in educating Baloch youth on the importance of their nation’s history, culture, and language. She emphasized that the conflict between the centralist policies of Islamabad and the Baloch people is rooted in the exploitative nature of the state, its multi-billion dollar military business empire, and undemocratic means to control the natural resources in Balochistan. She stated that the target killing of the learned scholar is reminiscent of the massacre of Bengali intelligentsia on the eve of the nation’s independence from Pakistan. Ms. Rahman also informed the audience about the disappearances and target killings of Sindhi nationalists by the same I.S.I. responsible for the serious human rights violations and the killing and dumping of the youth in Balochistan. 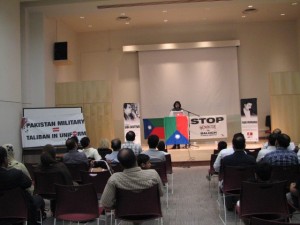 Mumtaz Khan, President, International Centre for Peace and Democracy, and representative of the Canadian Kashmiri Diaspora expressed his solidarity with the Baloch liberation struggle and praised Prof. Dashtyari for developing freedom-consciousness among the youth of Balochistan. Mr. Khan stated that the very foundation of the state of Pakistan since its inception is based on a fanatic jihadist culture that Kashmiris experienced when a hoard of Pashtun tribal lashkar, headed by a Pakistan Army Major, invaded our scenic valley in 1947. Mr. Khan said, “This in fact was the earliest face of Taliban with strong links to Pakistan’s military institution, now engaged in fighting proxy wars in the neighbouring countries.” He concluded that a year later, in 1948, the same army attacked the sovereignty of Kalat and annexed Balochistan on gunpoint. He remarked that independence of Balochistan is a just cause for which Baloch masses are paying a heavy price because they are aware of the value of freedom learned by generations under occupation and repression.

Representatives of Al-Ahwaz Democratic Popular Front and Turkoman movement, Mr. Taufeeq Ahwazi and Mr. Chaharyar, respectively, paid rich tribute to Prof. Saba Dashtyari for sacrificing his life for the freedom of his people and future generations. They said that although he did not live to see the day when his nation would regain its sovereignty but he will be remembered as a national hero who paved the path with his own blood. Mr. Ahwazi delivered his speech in English and his mother tongue, Arabic. Leader of the Al-Ahwaz Democratic Popular Front, Mr. Abu Sharif was also present at the memorial gathering. Mr. Chaharyar, representative of the Turkoman movement, indicated that in Pakistani occupied Balochistan they have murdered Prof. Dashtyari and in the Iranian occupied Balochistan they hanged Yaqoob Mehernehad – and one day this artificial boundary will disappear and a united free Balochistan shall re-emerge on the map of the world.

Secretary Press and Information, BHRC (Canada), Imtiaz Baloch had the honour to read the following messages to the audience at the memorial event:

Tarek Fatah, a prominent Canadian critique, author, and a great friend of the Baloch people who served sentence at the infamous Mach jail in the 1970s for his activism as a member of NAP.

Wendy Johnson, a New Yorker, publisher of the blog – Crisis Balochistan, and a passionate supporter of the Baloch cause. (Click for the full text of the message).

Mohammad Ali Baloch had the honour to present a message from BPP in Balochi. The message conveyed praise for Prof. Saba Dashtyari in his endeavour to promote the Balochi language, literature, and heritage to the younger generation of the Baloch nation. In addition, the message stated that artificial boundaries and demarcations could not separate us from our brethren under Pakistani occupation. Our struggles and goals are one, tied with history and blood of our people.