Zulfiqar Mirza made comments that infuriated many Urdu-Speaking people, when he said many Urdu Speakers had come hungry and naked to Pakistan. He was speaking after rumours that MQM wanted a separate province of Urdu Speakers. The trouble started when MQ M left government alliance, which led to PPP reinstating Commissioner System, like rest of three provinces. What had kept Local Government in abeyance was MQM’s demand for elected Local Government, but with that gone; PPP felt no compulsions to bring back the old system.
This further infuriated MQM, and some demanded a separate province, even though many main leaders of the party refuted the claim. There were few pamphlets distributed, some graffiti done but demand looked surreal. Mirza’s statement however exacerbated the situation, with around 14 people dead.
What puzzled me about the situation firstly is the reaction. Yes what Mirza said was injudicious, but so demand for separate province, yet you didn’t see violence in streets of Shikarpur, Mirpurkhas etc where there are good minorities of Mohajir people living together with Sindhi Majority. What struck me further was fact that Mirza had ‘hurt’ some people’s feelings. Though what his actual wordings were ‘hungry and naked’ were offensive, the message, that many who came to Pakistan after leaving everything in India, used to be a positive one. When did it become hurtful?
Many in fact did leave alot back in India. Hawelis or just houses, they were their life possessions and leaving them all for a new country with uncertain future took sacrifice. My meeting with first generation migrants, and even their second generation off-springs, has always been that they were quite proud of this fact. How this has now changed in to a slur astonishes me. I was, wrongly of course, under this impression that many people would come and say yes, we did leave everything for Pakistan and which is why we demand equal rights and proper representation. Reaction I saw astonished me.
Of course, as always, there was a lot of politics involved in this. Mirza’s statement also contained claims that real leader of Mohajirs was Afaq Ahmed, and not Altaf Hussain. Which would explain the sentiments as well the mobs more rationally in my view. MQM and MQM-H go quite back, and their war-fare was very bloody and brutal. It was a fight for hegemony, and in the end MQM won but at a large price of men and division of the community. Every time there mention of MQM-H or its leaders, remerging, it signals a violent backlash specifically because of the fact that MQM doesn’t want a contender. In 2002, when MQM was in opposition to Musharaff, it was destruction of MQM-H, that convinced MQM to join Musharaff and rest we know is history.
Mirza was attempting at the same, till he made some remarks which were out of bad taste. Effect was that instead of this giving MQM a reason to rethink, join PPP have commissioner system removed, have local bodies and also have threat of MQM-H buried again. Or be in opposition and bear the consequences, of course these would have meant the opposition alliance would have tried their best to end the government, though as long as Q is with PP that is mathematically impossible. So a political game that turned ugly. Media’s incessant repeating of comments did enough to fan the flames, but of course we have become used to this sensationalist yellow journalism in electronic media, bar none.
What happened in Karachi is sad, what is sadder still that many Urdu-speaking people who otherwise despise ethnic violence, find themselves being emotionally manipulated because they feel they need to take sides, with those with whom they share their Mohajir tag. Its people’s fear again taking hold of their better judgement, which has proven once again that there would remain a wedge driven between people for years because these things have lingering consequences. 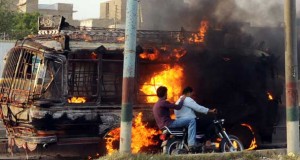 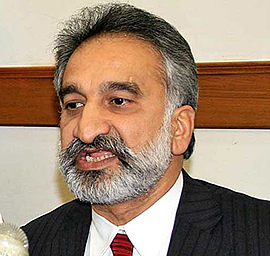