It is said that a wounded animal is most dangerous. Our military is behaving like a wounded animal and trying to shut down all dissenting voices. The military operation in Balochistan is a clear example of how the army deals with dissent 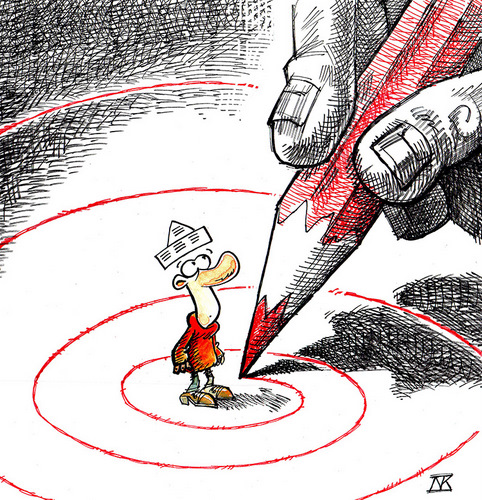 Terrorism at its peak, bomb blasts in every nook and corner of the country targeting both the security agencies and civilians, religious bigots threatening secular voices and religious minorities alike, sectarian violence, missing persons, the security establishment’s kill and dump policy in Balochistan, a weak government and an all too powerful military. These are just ‘some’ of Pakistan’s afflictions. Add a dwindling economy, power shortages, unemployment, poverty, illiteracy, corruption to the ever-growing list of woes Pakistanis have to face every day. As if this was not enough, Pakistan has been termed as one of the most dangerous countries for journalists.

“Be careful.” “Stay safe.” Every Pakistani journalist has heard these words countless times from family members, friends and well-wishers since May 31; some more so than others. On that fateful Tuesday evening, Syed Saleem Shahzad’s body was found from Mandi Bahauddin two days after he had gone missing from Islamabad. He was tortured to death. By now we all know that Shahzad confided in some friends and colleagues about the potential threat to his life from Pakistan’s most dreaded spy agency, the ISI. Human Rights Watch (HRW) made the contents of his e-mail public, which he had sent to HRW’s Ali Dayan Hasan. Later, Hameed Haroon, President All Pakistan Newspapers Society (APNS), backed HRW’s claims regarding Shahzad.

Now an explosive story in the New York Times (NYT) quotes American officials who have directly laid the blame of Shahzad’s murder on the doorstep of the ISI. “Every indication is that this was a deliberate, targeted killing that was most likely meant to send shock waves through Pakistan’s journalist community and civil society, said the official, who like others spoke on the condition of anonymity because of the delicate nature of the information” (‘Pakistan’s Spies Tied to Slaying of a Journalist’, By Jane Perlez and Eric Schmitt, July 5, 2011, NYT).

The story further tells us that the reason why the Obama administration does not want to make this information public is because “the disclosure of the information in itself could further aggravate the badly fractured relationship between the United States and Pakistan”. On the surface this reason seems plausible given that diplomatic relations between the two countries are at their lowest ebb. But one wonders why the sole superpower is not making this information available to the Saleem Shahzad Commission. Is it not the right of the Pakistani nation to find out the truth? By submitting this “new classified intelligence”, the Obama administration would be doing itself a favour as well. The Pakistan Army and the ISI’s double dealing in the war on terror is one of the vital reasons why the US-led NATO forces have not achieved much success in the ongoing Afghan war despite 10 years of military presence and billions of dollars of investment. If some ISI heavyweights get indicted in Shahzad’s murder on the basis of this intelligence report, both the Pakistani public and the world at large would be benefitted. It would be a serious blow to the impunity with which our military officials and their intelligence agencies operate in Pakistan and elsewhere in the region, most notably in India and Afghanistan. On the other hand, DG ISPR Major General Athar Abbas has called NYT’s reports “a direct attack on our security organisation and intelligence agencies” to “weaken the state”.

May turned out to be one of the worst months as far as the military was concerned. Post-Abbottabad raid on May 2 by the US to take out the world’s most wanted terrorist, Osama bin Laden (OBL), the pressure on Pakistani military has been building gradually. The attack on PNS Mehran by a handful of terrorists was something that jolted the nation out of its stupor. How could a supposedly well-protected naval base with millions of dollars worth of aircraft and equipment be attacked in such a manner was the question on every Pakistani’s mind. That the terrorists were able to engage our mighty armed forces for more than 16 hours and then some of them even managed to escape was mindboggling. Comparisons were made between this attack and the attack on the GHQ in October 2009. The people of Pakistan wanted to know if our armed forces could not even defend themselves on Pakistani soil from such audacious attacks, how were they going to defend us in a conventional war? Pakistan spends a huge amount of its budget on the military, which is not transparent and open for debate in parliament yet we have not won a single war with India. Our textbooks hide this bitter truth from our general public and continue to glorify the military. But now the public and mainstream media is challenging these myths of superior military power. The brutal assassination of journalist Saleem Shahzad led to the journalist community demanding that the ISI be held accountable if it was involved in his murder. This seems to have irked our military top brass. The intelligence agencies and their civilian proxies are out in full force for ‘damage control’.

An advocate of the Supreme Court of Pakistan, Sardar Muhammad Ghazi, who is also a former Additional Secretary Supreme Court Bar Association (SCBA) and former Deputy Attorney General of Pakistan, filed a petition in the Supreme Court against three journalists — Najam Sethi, Ejaz Haider and Hamid Mir — for ‘defaming’ the military. In his petition, Mr Ghazi claims that there are “deep rooted conspiracies externally against [the] existence of this country [Pakistan] on the world map as the only nuclear power in the Muslim world”. Ghazi further states that the “armed forces of Pakistan, as an institution and ISI the premier spy agency, are being widely rebuked and reproached by those who are promoting the agenda of the arch enemies of our country”. He is angry that “the pen pushers and a category of anchorpersons are spitting venom against the ISI and the armed forces”. He also blames the CIA, RAW and Musad [the advocate obviously does not even know the correct spellings of Mossad] for having “deeply penetrated in the rank and file of Pakistan”. The Supreme Court may not even entertain Mr Ghazi’s petition but that such a petition was filed in the first place has raised many an eyebrow.

It is said that a wounded animal is most dangerous. Our military is behaving like a wounded animal and trying to shut down all dissenting voices. The military operation in Balochistan is a clear example of how the army deals with dissent. And the way the journalist community is now under constant threat is another example of the military’s highhandedness. But this must not deter our brave and bold journalists; as it is there are only a few of them who do not succumb to such pressure.

Journalists are not the ones defaming the armed forces; the military establishment is itself responsible for defaming Pakistan.

The writer is Op-Ed Editor Daily Times. She can be reached at mehmal.s@gmail.com

Punjab government fails to respect quota for minorities
My father died for Pakistan: An examination of religious extremism in Pakistan