Sharif brother’s recent move is aimed at toppling the democratic setup. The grand alliance in the offing, led by Sharifs of Punjab, is based on one-point agenda – getting rid of Asif Ali Zardari-led PPP administration, another change in its stance. 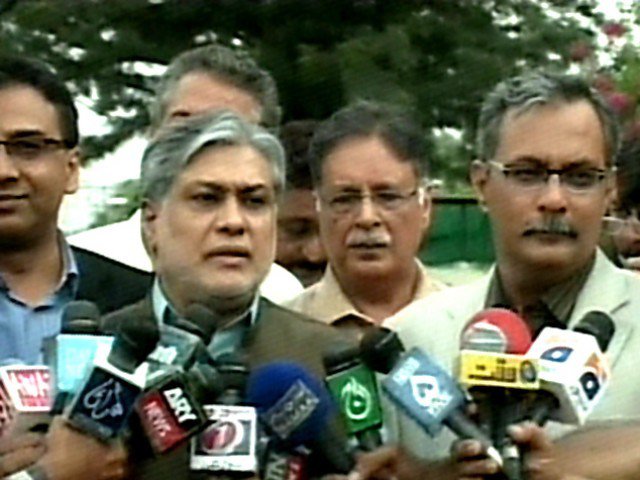 LAHORE: Sitting with the blue-eyed guys of living dictator General (r) Pervez Musharraf — embracing the MQM is not the first summersault by the ‘champions of democracy,’ PML-N has a history of U-turns on its stance.

Noteworthy is a clause of the declaration of the All Parties Democratic Movement (APDM) held in London that was organised and financed by the PML-N that reads that no political party would interact with the MQM. This ‘socio-political boycott’ of the MQM was motivated, pressed and got approved with the personal interest of the N-League leadership. The reason given to the participants was that the party is the opening batsman of the dictator and had damaged the democratic norms, institutions and the political forces.

The PML-N leadership has been repeatedly saying that it would not compromise on the democratic norms and tolerate any person or group who remained part of the Musharraf administration, but its took a U-turn when it adopted a person, Zahid Hamid, who was law minister of PCO of November 3, 2007, that imposed emergency in the country that is being dubbed as ‘second martial law’ by Mian Nawaz Sharif. It does not stop here, as PML-N chief took in his folds Rana Nazir Ahmad of Gujranwala, who was an active leader of PML-Q during Musharraf regime.

The former minister of Chaudhry Pervaiz Elahi, Chaudhry Muhammad Iqbal Gujjar is the recent entry in the party ranks. The story of U-turns goes back to general elections of 2008 when APDM decided to boycott the polls. The APDM was a political alliance consisting of thirty-two parties opposed to the military rule of Pervez Musharraf. Its noteworthy members included Pakistan Tehreek-e-Insaf, Pakistan Muslim League-N, Pakhtunkhwa Milli Awami Party, Muttahida Majlis-e-Amal and Awami National Party. All legislators of APDM resigned from their National Assembly and the regional assemblies seats when Musharraf’s nomination papers for the presidential election were accepted.

The major stakeholders of this political alliance, PTI, Jamaat-e-Islami and Pakhtunkhwa Milli Awami Party, decided not to contest the election. Nawaz Sharif endorsed the decision but on his return to country, his party participated in the polls. During those days he shifted his stance many times but finally took part in the process and as a result Shahbaz Sharif became the chief minister of the biggest federating unit, Punjab, with the help of the PPP.

Since the inception of Punjab Assembly, the N-League had been opposing taking PML-Q legislators in its folds, but the situation is different — the PML-N accepted them but in a different way. They were asked to become turncoats as a new group – Unification Block – was formed and its members became the pillar to save the Punjab government.

There’s a major change in the PML-N policy, as it had always expressed opposition to destabilising the government and had called for letting the assemblies complete their tenure. The Sharifs of Punjab were very vocal on the point that completion of constitutional tenure is a must for strengthening the democratic norms. They refused to become a part of any movement aimed at dislodging the government, but their recent move is aimed at toppling the democratic setup. The grand alliance in the offing, led by Sharifs of Punjab, is based on one-point agenda – getting rid of Asif Ali Zardari-led PPP administration, another change in its stance.