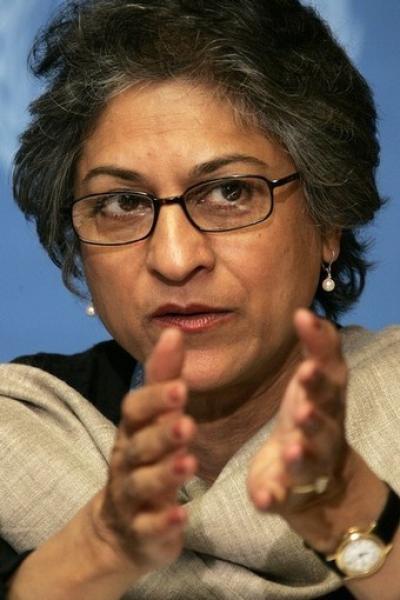 Pakistan’s civilian leaders should capitalize on public anger with the military and try to ease its grip on power, a leading human rights activist and lawyer Asma Jahangir said.

The army’s image has been dented by a number of setbacks starting with the killing of Osama bin Laden last month by U.S. special forces on Pakistani soil.

Asma Jahangir, a leading human rights campaigner and head of the Supreme Court Bar Association, said the mood in the country provided an opportunity to start correcting a lopsided balance of power between the army and the civilian government.

“I am hopeful that public opinion will finally embolden civil society, including politicians. But it’s not going to happen tomorrow morning,” she told Reuters in a telephone interview.

“It’s going to be a perpetual struggle. They are not just going to hand over and say ‘thank you very much we are now under civilian control’. But at least they know that’s what people want now.”

The military has ruled nuclear-armed Pakistan for more than half of its history. Generals set security and foreign policy, even when civilian governments are in power, as is the case now.

“Our parliament has to strengthen itself for anyone to change because nobody hands over power just voluntarily,” said Jahangir.

“The parliament will have to be more forceful and also begin to realize that they (the army) can’t hold the economy of this country hostage, foreign policy hostage.”

Pakistan’s civilian leaders don’t seem willing to stand up to the military in a country prone to army coups. Generals often orchestrate Pakistani politics from behind the scenes.

“They have selfishly overlooked the interests of the people of Pakistan. We think that it’s time to change,” said Jahangir.

The army says it does not interfere in politics and reiterated its commitment to democracy in a statement issued this month.

Jahangir said she is hopeful of change because the military has been on the defensive.

The United States kept Pakistan in the dark over the raid that killed bin Laden, humiliating the army and then piling pressure on it to crack down harder on militancy.

Then a handful of militants besieged a naval base in the city of Karachi last month, further embarrassing the military, which eats up a large chunk of state spending.

About 25 percent of government expenditure flows to the defense budget, according to some estimates, in a country with widespread poverty and social inequalities.

To make matters worse for the military, suspicion fell on its Inter-Services Intelligence (ISI) spy agency after a prominent Pakistani journalist was tortured to death and dumped in a canal. The ISI said it played no role in his death.

Then the killing of an apparently unarmed man by paramilitary forces which was caught on videotape further eroded what little public confidence remains in Pakistan’s security forces.

Jahangir said politicians and Pakistanis should move swiftly, but cautiously, to try and strengthen civilian institutions while the military seems vulnerable.

“Momentarily they are a bit worried. They are vulnerable to the extent that people are besieging them to change. It is critical,” she said.

“They have a way of overcoming it too. They know that this is momentary. They will soon start getting their civilian counterparts to change public opinion to confuse the issue, to demonize people. We have seen it happen before.”