Initially, I was amazed at the media attention Syed Ibrar Hussain’s recent assassination in Quetta received, but I could rationalize it quickly – it wasn’t Syed Ibrar Hussain (or Ibrar Agha as he was known) who was being eulogized and mourned.

Syed Ibrar Hussain’s murder was mentioned in the media – unlike hundreds of other innocent victims from his sect – because he had won a few medals ‘for Pakistan’, as it is said. While he was an equally lesser-Muslim, he was relatively more-Pakistani than the rest of the Shia-Hazara people, and that is why his death wasn’t (couldn’t have been) ignored with similar disregard and apathy. Unfortunately, it was the curse of Patriotism that pinched people to remember him in his death, not a humanistic pang, not even guilt.

The Shias of Quetta (predominantly Hazara and henceforth mostly referred so) have been at the receiving end of violence for a decade now. Not surprisingly, their miseries have remained untold and unknown. The culprits are at large, emboldened and encouraged by either State’s connivance or its indifference. Even Hazaras themselves, despite history’s testimony, cannot comfortably discern the silhouette of their elusive enemy. Their wild guesses and convenient justifications fail their own cause, and understandably so. Hazaras are common people, with the typical inadequacies of the general masses. In naivety, they can even partially be their own enemies as all human beings are, but they cannot be held responsible for their sufferings. In fact, their plight raises several difficult questions for the State of Pakistan.

Pakistan is a strange country. It approaches its citizens like an insecure and doubtful spouse, and the Shia-Hazaras do not conform to the ideal Pakistani prototype. They have to be doubted; they have to be beaten; they have to be changed. They share their religion with Iran, which is otherwise a ‘brotherly Islamic neighbor’, and their race with one of the factions in the Northern Alliance, the ‘Indian agents in Pakistan’s fifth province’. The Hazaras, most of whom aren’t even cognizant of their crimes, therefore need to be bludgeoned and battered till they categorically say: “we are elephants”. Diversity is aberration in Pakistan, and any aberration is a threat.

The Hazaras, who have lived in Quetta for over a century now, were the blue-eyed boys of the State after partition of India, but fate cheated them when several events such as the Soviet Invasion of Afghanistan, the Iranian Revolution, and Zia-ul-Haq’s ascension to power coincided. The general political and social environment in Pakistan was beginning to change by then with religion taking the center stage in the public sphere.

During the Soviet Invasion of Afghanistan, the Hazaras in Quetta could be loosely divided into several groups: the Iranian influenced religious people, the nationalists, the communists and the majority of the benign common people who loved their religion, loved their country, and were just like all other ‘ordinary people’.

During the 1980s, the paranoid and always-threatened state of Pakistan developed a duplicitous relationship with the Hazaras of Quetta. Religion was considered the immediate threat and Hazaras therefore needed to be de-Iranized. While secularism (let alone its more acute variants) has otherwise been a taboo in Pakistan, when it came to the Hazaras, the Deep State in Pakistan supported the secular nationalist and even Communist groups among Hazaras against the religious elements who were pejoratively called “Khomeini’s Children/Orphans”. The state successfully used all its mind and muscle to rid Quetta of the Iranian influence and bury its remains in the Hazara Graveyard along with Ibrahim Hazara (a nationalist student leader whose death was used as pretense to rid Quetta of the Imamia Students Organization (ISO)).

But duplicity isn’t the only trait the Deep State is known for, much to its chagrin, it is also known for glaring stupidity. The same religious elements were resurrected later due to stupidity, when the State along with its strategic assets got back to the Hazaras with vengeance a decade and a half later. 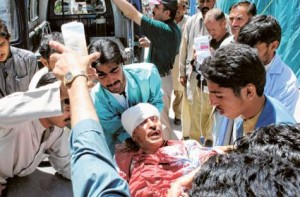 After 9/11, when hordes of ‘strategic assets’ in Afghanistan were hushed back into Pakistan, many of them found cozy sanctuaries in Northern Balochistan. The Hazaras in Afghanistan, being a part of the Northern Alliance, had come into power in Kabul, but many Hazaras still lived in Pakistan. The Deep State didn’t see Hazaras as Pakistanis anymore, rather as brethren of the Hazaras in power in Afghanistan. And this is quite typical of the Pakistani mindset. It sees to the masses as subjects, not citizens, and sanctions rights discretionally, not constitutionally.

The frustrated ‘strategic assets’ now back in Pakistan and waiting for another go in Afghanistan (for which they had to wait till 2014) needed punch bags, and the state provided for that in the form of Shia-Hazaras in Quetta, and Shias elsewhere. Killing must be an addictive habit, especially if it’s a religious one. For the state itself, the Hazaras of Quetta were hostages it could use for bargaining with the Northern Alliance, and for its unholy children, they were toys to remain temporarily occupied with. But this ‘engagement’ was not-so-temporary.

In all the incidents of violence against the Shias in Quetta (which also includes ethnicities other than Hazaras), Lashkar-e-Jhangvi has claimed responsibility, while there have been instances of Jaish-e-Muhammad and Jundallah cadre too being involved in this systemic genocide. This ‘unity’ isn’t much surprising knowing that all the militant outfits in Afghanistan belonging to various ethnicities and countries, with military and financial support from Pakistan Army, joined hands in the attack on Mazar-i-Sharif and ethnic cleansing of Hazaras.

During the initial years, individual or group target killings took place in either secluded places, or a few areas known to be militant sanctuaries. But for a while now, every part of the city seems to be infested with militants. Leaflets of edicts declaring Shias as apostates and threatening their genocide have been scattered and dropped in houses in an area predominantly Shia-Hazara, and far from areas earlier considered as militant zones. 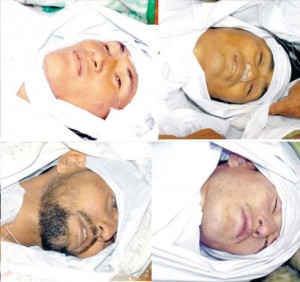 It is ironical that the Shias of Quetta don’t quite know those who’ve been targeting them. The Deep State, very conveniently, has convinced many of them that they’re subject to an international conspiracy and are being targeted at the behest of US, India and Israel. Some blame the Balochs for the killings, while others put the onus on the Pashtoons who they believe want to grab their lands. The truth is lost somewhere behind the smokescreen of lies.

Today, a sinister dark prevails in the gloomy city as an eerie wind blows. The Hazaras have been confined to two ghetto-like areas while every member of the community anticipates death. Life has come to a standstill and death swaggers in the streets. Kids hesitate going to schools, men are apprehensive to leave their homes for work, and women do not want their loved ones to step out of the house unnecessarily. But the same people attend religious gatherings and processions in scores, yet the state is bent upon reinforcing its erroneous policies.

In the meanwhile, the pompous state watches its boys (some delinquent, others still obedient) play in the periphery with things that don’t really matter, and awaits developments in Afghanistan. Till then  it wants the Hazaras to serve the interest of the state by keeping the boys busy and satiated, and also atone their sins in the course. This is a service to the cause of the nation and a national duty. After all, Pakistan Comes First!

Click here to post a comment
Who’s role was it in renaming NWFP? – A Rebuttal to Saleem Safi
Democracy is the path and solution – by Naveed Ali