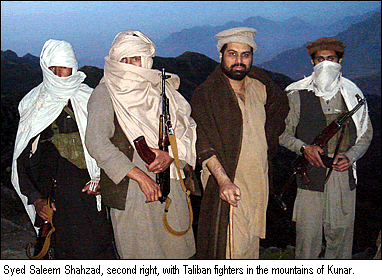 The book is a news reporter’s entry into the world of analyzing current affairs and to an extent geopolitical forecasting. Off the bat, the author rejects the prevailing western understanding of al-Qaeda being on the ropes

Book review: Inside Al-Qaeda and the Taliban: Beyond Bin Laden and 9/11 – by Syed Saleem Shahzad

“The greatest trick the devil ever pulled was convincing the world he didn’t exist.”

Syed Saleem Shahzad, a Pakistani investigative reporter associated with the Asia Times Online, was brutally murdered last month. His body was recovered a week after his book Inside Al-Qaeda and the Taliban: Beyond Bin Laden and 9/11 was published by the Pluto press. Saleem’s gruesome death triggered a series of protests in Pakistan that seems to be drawing attention away from his book. While his journalist colleagues have launched a serious protest campaign, only a few have attempted to discuss Saleem’s present work. And in an emotionally and politically charged atmosphere, it may actually be very difficult to do so objectively.

Holding the 272-page paperback edition in my hand gave me a déjà vu. I had seen this before, but where? I admit that I have not been following Chomsky, Zinn and Pilger, whom the Pluto takes pride in publishing, that closely. But the Pluto logo was unmistakably reminiscent of something. I walked up to my study to look, and there it was: the late John Cooley’s 1998 seminal work “Unholy Wars”, which was at least a couple of years ahead of what eventually became a cottage industry i.e. writing about al-Qaeda, militant pan-Islamism and jihadism, the ISI and their interplay on one hand and the US western response to it on the other. Reading through Saleem’s book, one is constantly reminded of the strengths and weaknesses of Cooley’s work, which strangely was hardly quoted in the mainstream media after 9/11 – an event that Cooley was one of the first few to have seen coming.

Interestingly, Saleem states in the opening sentence that he has never worked for any well-funded international news group or the mainstream national media, thus priming the reader that what follows is an alternative narrative of the current world events. The book is a news reporter’s entry into the world of analyzing current affairs and to an extent geopolitical forecasting. Off the bat, the author rejects the prevailing western understanding of al-Qaeda being on the ropes. Indeed, he posits that the terror network and its affiliates are not only ascendant but will prevail over the US and its allies. In Saleem’s book Al-Qaeda is the protagonist, whom he compares to Scheherazade, the queen telling the fable “A Thousand and One Nights”, who had weaved stories out of stories to avert murder ordered by her husband. According to Saleem, al-Qaeda launches a new plot replete with a new cast of characters, each time it is considered near death.

Saleem Shahzad presents the origins, ideology, vision, strategy and tactics of al-Qaeda to achieve its mission, in detail that is the forte of an investigative reporter. He states that al-Qaeda’s first objective is to win the war against the west in Afghanistan, then expand the combat zone from Central Asia to Bangladesh but importantly to India, in the process drawing in the superpowers and bleeding them to death till the final “End of Times” battle will vanquish them in the Middle East leading to achievement of the ultimate objective to “revive the Muslim political order under the Caliphate, which would then lead to the liberation of all Muslim territories”.

The book vividly describes the nuts and bolts of al-Qaeda’s game plans like its emphasis on raising awareness in, and thus recruiting, the indigenous holy warriors or ‘ibnul balad’ (sons of the soil) from across the Muslim world, who would rally under al-Qaeda’s banner and join its ‘khuruj’ – the revolt by pious Muslims against the heretical or un-Islamic regimes. The work emphasizes that the centerpiece of al-Qaeda’s ideology is a concept termed ‘takfeer’ which literally means declaring other Muslims as infidels and thus liable to murder and terror attacks, if they do not conform to what al-Qaeda perceives as the definition of a pious Muslim.

Equipped with a reporter’s fine-toothed comb, Saleem excels in chronicling the minutiae of al-Qaeda’s plans, assorted attacks –including the one that purportedly killed Benazir Bhutto- and its retreats, but one finds him lacking as an analyst as well as a critical thinker ready to cross-examine his sources and indeed his protagonist. He appears almost enamored by the shadowy dealings of al-Qaeda and the Pakistani ISI and its ‘rogue’ elements. While the Scheherazade’s characters like the commando-turned-jihadists Captain Khurram, his brother Major Haroon (who killed General Faisal Alvi), Captain Farooq (President Musharraf’s security officer who helped smuggle night-vision goggles for jihadists) and Ilyas Kashmiri (who had planned an attempted assassination of General Ashfaq Kayani) appear and disappear, only to reappear – at the expense of tedious repetition – in the book, Saleem fails to ask the pertinent questions about what allows them the impunity with which they have operated in a modern nuclear weapons-armed state.

He documents 16 routes used by al-Qaeda and its affiliates to commute between Pakistan and Afghanistan but does not question or explain (other than each being in remote terrain) as to why has the state machine failed to plug these transits. Like John Cooley, Saleem’s documentation of sources and references is skimpy at best. In fact, reference notes are given for only the preface, prologue and three out of eight chapters. One also finds him fumbling with the issues related to Islamic history and ideology, which is a major draw back in a work that deals exclusively with a pan-Islamist jihadist outfit. The Arabic words and terms used in the book are either transliterated incorrectly or reflect the author’s rudimentary grasp of such terminology. He mistakenly claims that the Deobandi ‘Sufi’ order is the predominant mystical group of Muslims from South to Central Asia. Perhaps it is this elementary understanding of the Islamic texts that has kept Saleem from critically dissecting the pivotal game plan of his protagonist i.e. the Ghazwa-e-Hind theory. 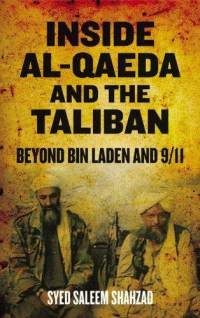 The author claims that a Hadith (saying) of Prophet Muhammad (PBUH) that is “memorized by every Muslim… heralded the emergence of a Muslim army from the regions of ancient Khurasan” (present day Afghanistan, Pakistan, Iran and Central Asia) and carrying black flags will wage war against the enemies of Prophet Muhammad (and his household) and emerge victorious. They will be offered worldly goods but would decline till a man from the Prophet’s family will emerge and fill the world with justice. And whomever that time must join with this promised messiah or al-Mahdi. He goes on to note that this particular Hadith is read along with another saying that “a group of you will conquer India, Allah will open for them (India) until they have come with its kings chained – Allah having forgiven their sins. When they return back (from India), they will find Ibn Maryam (Jesus) in Syria.”

This battle for India, spreading eventually to the Middle East, is the tactic and the strategy through which al-Qaeda plans to get closer to the Islamic Caliphate and Saleem intends to turn the current geopolitical paradigms on its head. Interestingly, Ghazwa was the term used for the battles in which Prophet Muhammad (PBUH) participated in person – a fact overlooked by the author. It is indeed surprising that he would repeat this Hadith multiple times in the book, without once critically examining it. He does acknowledge in passing that the ISI had originally conceived the Ghazwa-e-Hind thesis but – like the blueprints for Mumbai attack- the idea was adopted and perfected by al-Qaeda and its franchises, while the Pakistani security establishment relegated it to a nominal tool in the usual proxy warfare.

But Saleem does not explore the veracity of the either Hadith or attempt to find out that the mainstream Muslim scholars have considered both as the weakest of the weak Hadith that were probably concocted at the behest of two Muslim monarchies. Interestingly, if the timeline of the appearance of the two sayings in the Hadith literature is followed, the one about India predates the one about the army from Khurasan. The simple reason being that one about the Ghazwa-e-Hind was used to lure people to join the Muhammad bin Qasim-led invasion of India in 712 CE and the one about legions from Khurasan was deployed by the Abbasid general Abu Muslim Khurasani to topple the Ummayads circa 747 CE!

Unlike a geopolitical analyst Saleem completely ignores the potential response of the world and regional powers to al-Qaeda’s game plan and how al-Qaeda and its allies intend to respond to that. While he correctly raises the specter of the Pakistani security establishment’s core having gone jihadist, his documentation of such groups within the military is rather sparse. He also does not expound on the response of the brass to this indoctrination going and the level of their complicity in it. Nonetheless, the points raised by Saleem about the layers upon layers of the jihadists, some spinning out of control of the ISI, as well as his tragic murder, are enough to make this book a must read for anyone interested in the current affairs and especially the policy planners dealing with Pak-Afghan region. Like Cooley’s aforementioned book, Saleem’s alternative narrative can only be ignored at one’s peril. These tales of the thousand and one nights of terror unleashed by al-Qaeda and its various franchises as well as their ‘turf battles’ with the Pakistani ISI are enough to give the world leaders perpetual insomnia and fit to be adapted as movie.

It is almost as if Saleem was on a quest to find Keyser Söze from among the lineup of the usual suspects. But like in Bryan Singer’s movie, Keyser Söze may have slipped from Saleem’s hands saying: “And like that, he’s gone”.Charles Baudelaire may not have been that off mark after all.
The writer practices and teaches Medicine at the University of Florida .He contributes to the think tanks www.politact.com. He can be reached at mazdaki@me.com.The reviewer tweets at http://twitter.com/mazdaki.