Benazir had equipped the Pakistani military with missile technology, which she had successfully obtained from North Korea, and supported the military in many other ways but despite her efforts she remained an outsider for Pakistani generals who considered her a “security risk”.

Bhutto’s death divided Pakistan as he became more popular after his death. Bhutto remained a formidable political power in Pakistan due to his pro-people credentials and policies of his talented daughter Benazir Bhutto. Benazir, too, was killed but the ghost of Bhutto continues to chase the Pakistani generals to date.

The guilt of Bhutto’s murder affected the collective psyche of the Pakistani military, virtually, transforming the armed forces of Pakistan into an anti-Bhutto party. The success of Benazir Bhutto amounted to a defeat for the military. Bhutto’s party, the Pakistan People’s Party (PPP), is, still, seen as a threat to the interests of the military empire.

Since 1988 until her violent death in 2007, Benazir was a thorn for the military and they never felt comfortable in dealing with her. The mistrust, however, was mutual. 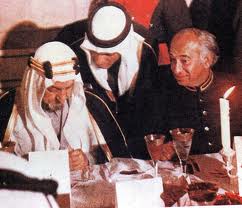 Interestingly, Benazir’s father Zulfiqar Ali Bhutto had established a very special relationship with the Saudi King Shah Faisal and together they had been working on the creation of an Islamic block.

Mr. Bhutto started looking at Saudi Arabia after he had developed serious differences with the Iranian King Raza Shah Phelvi. The Iranian king was a trusted U.S ally in the region.

Mr. Bhutto was an extremely intelligent and smart leader. He was married to an Iranian lady, Nusrat Isphani. The Iranian monarch, probably, thought that a Western trained, modern Bhutto would be his junior partner in the region, but Bhutto disappointed the Shah. 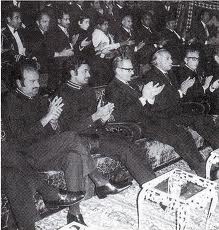 Bhutto was trained in the West at the height of the Cold War and at a time when Third World countries in Asia and Africa were revolting against Western imperialist powers. It was also a time when the horrors of the U.S bloody intervention in Vietnam had again unmasked the dark and ugly face of the U.S democracy.

In 1971, a young and energetic Bhutto took charge of his broken country and vowed to adopt an independent policy that was in the interests of his nation. Obviously, Bhutto’s rhetoric ringed bells from Tehran to Washington.

Later, Bhutto’s active role in the creation of OPEC, his idea of establishing an Islamic block and his practical support for Palestinians turned Bhutto into an unwanted leader and a troublemaker for the United States and her allies.

In 1975, one of Bhutto’s main supporters the Saudi King, Shah Faisal, was murdered. It was the beginning of a much bigger change that also saw the dismissal of Mr. Bhutto and his subsequent judicial murder. By the late 1970s, Saudi Arabia and Egypt, too, had become very strong U.S allies along with some other Arab states.

Iran, on the hand, witnessed a different change. The 1979 Islamic Revolution transformed Iran from a U.S ally to a staunch critic of the U.S policies and designs in the Middle East Region.

The same year, the Soviet Union sent its troops into Afghanistan and this altered the geo-political situation in the region. The Pakistani military dictator Zia-ul-Haq used the opportunity to prolong his rule by playing a key role in the U.S proxy war in Afghanistan.

This was also the time when a deadly nexus developed between the security services of the United States, Saudi Arabia and Pakistan. The aim of this unholy alliance was to harm the Soviet Union and Iran.

While the U.S mercenaries and proxies were fighting in Afghanistan, the Saudi and U.S money was used for creating sectarian divisions in Afghanistan and Pakistan with the aim to counter the influence of the Iranian Islamic Revolution.

A very strict Saudi brand of Islamic ideology was promoted in Pakistan that also affected ranks of the Pakistani armed forces. Private militias and war lords adhering to the Saudi ideology were sponsored and people such as Osama bin Laden were recommended to Pakistan by the then head of Saudi Intelligence Prince Turki-al-Fasil.

After the judicial murder of Zulfiqar Ali Bhutto, his party was led by his Iranian wife Nusrat Bhutto and daughter Benazir Bhutto. Saudi sponsored military, media and religious groups opposed Nusrat and Benazir Bhutto. The mother and daughter were also mistrusted due to their Iranian blood and their closeness to the Shia shade of Islam. However, despite oppression and character assassination attempts, Benazir Bhutto-led Pakistan People’s Party won the 1988 elections that were held after the death of General Zia-ul-Haq in an air crash.

The United States did not trust Benazir Bhutto as she would not listen to the U.S dictates on foreign and economic policies. She appeared friendly to the West and the military but in reality she would use every opportunity to follow independent policies. Pakistan-sponsored militancy in the Indian administrated Kashmir started in 1989 when she was the prime minister of Pakistan, but Benazir had serious differences with her generals over the use of militant groups and eventually the military managed to fire her.

During her second term, she went to North Korea allegedly carrying the blue prints of missile and nuclear technology in the pockets of her overcoat. The Americans were furious. Then in 1994, the Pakistani military with the backing of the United States, Britain and Saudi Arabia launched the Taliban project, Benazir had serious reservations about the Taliban adventure.

Just after the emergence of the Taliban, Benazir Bhutto had visited Peshawar and participated in a briefing on Afghanistan. I was present at the briefing and I remember how uncomfortable she was by the tall claims that were made by some Pakistan officials. Her resistance to the Taliban project made her unpopular in the White House and the Whitehall, and the House of Saud already despised her.

After Benazir’s second dismissal from power one senior British diplomat had told me in 1999: ‘She has no future, she is corrupt and is politically finished’.

Upon my return to London from a trip to Afghanistan and Central Asia, I met Benazir Bhutto at her London apartment in the summer of 2003. As I was informing her about the opportunities that Central Asia could offer to Pakistan, all of a sudden, with a cheeky smile on her face and a shine in her eyes she asked: ‘Where is bin Laden?”

I was stunned and somehow puzzled by her question because it was not related to our discussion. However, my spontaneous response to her question was: “BB, the Saudi ambassador to Britain Prince Turki Al-Fasil would know his whereabouts.” It was a sarcastic statement but she became very serious and seemed concerned and cautious. She was quiet for a few seconds and then she said: “Let us not talk about Saudis, I already have many enemies.”

After saying that Benazir implied as if Pakistan and the United States were aware of bin Laden’s location or fate. It was a very interesting revelation and I tried to probe her if she could be more specific but she did not elaborate any further.

Benazir was one of the few Asian politicians, who like her father understood strategies and workings of Western governments. She was also well-aware that the Pakistani military was part of a dangerous web of security establishments that included Saudi, British and U.S security services. Till her death, Benazir Bhutto remained concerned about the hidden agenda of security establishments. Perhaps she also suspected that bin Laden was just a front man.

Benazir Bhutto believed that terrorism was not just acts of a small number of extremists. Perhaps she was able to comprehend the real aims of the powers behind terrorism. She foresaw the disastrous consequences of the war on terror for her country.

Perhaps her this understanding of the dirty and deadly agendas of the masterminds of the ‘war on terror’ and sponsors of terrorism was the real cause of her violent death on December 27, 2007 in Rawalpindi, very close to the headquarters of the Pakistani military and under the nose of General Pervez Musharraf, who was another general in the long list of U.S confidants in the Pakistani military.