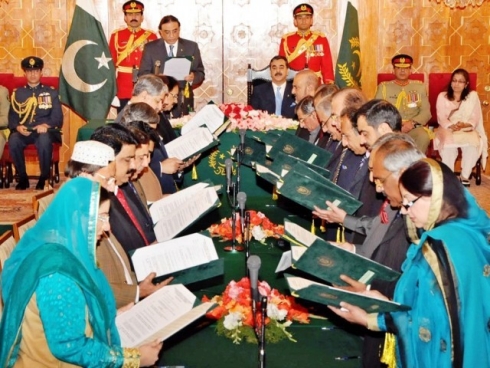 How many countries function without a Foreign Minister at a time of diplomatic turbulence, when relations with its main ally, United States, stoop to a new low? Well, Pakistan does.

For a frontline state entrapped in the Afghan conflict, it is shocking that Pakistan only has an acting FM, Hina Rabbani Khar, who before her promotion was the Minister of State. She is undoubtedly inexperienced, and after the sacking of Shah Mehmood Qureshi in February, the more experienced and seasoned politician, a glaring void is apparent. At such a critical stage, when the United States is breathing fire on Pakistan, and is threatening to slash economic and military aid, our country has no official representative who can skillfully deal with the barrage of castigation that marks the post Osama era. Now, take a deep breath and let this sink in.

The immediate aftermath of Osama’s death was marked by uncertainty, of a kind that managed to confound an entire nation, as torrents of conspiracy theories circulated endlessly in the media. Now that the dust has settled, and a modicum of sanity has returned, one can take an objective view of the entire affair. Amid all the smog, one thing is clear. Pakistan’s image has been tarnished, big time.

Now that Osama has been found right under the noses of the military establishment, the West can hold Pakistan culpable of playing along since the outset, of engaging in a double game with both the Taliban and the Americans. And to be painfully honest, nothing really can stand as a potent defense for Osama’s presence near PMA . It’s just one of those awkward moments when you are damned even when you speak and even so when you don’t.

Shah Mehmood Qureshi has been increasingly sidelined by the ruling party after his show of defiance in the Raymond Davis saga. His bold assertion that Davis did not enjoy blanket immunity did not go down well with the United States, and consequently, Mr. Qureshi was relieved from his duties as Foreign Minister. Apparently, the United States could not tolerate an assertive minister, who valued principle over politics and could not compromise his integrity by acquiescing in a double murder. Mr. Qureshi’s principled stand has won him many accolades for in a country where the very name of politics is relegated to corruption and debauchery, such acts of valor highlight that even in all the mess, there is someone out there not afraid to raise his voice against injustice and brutality that others so easily disregard.

In Pakistan, the blurring of the roles of ministries is manifested, by the interior minister Rehman Malik, who after the sacking of Mr. Qureshi, has started acting as the country’s foreign minister. His recent visit to Iran and Saudi Arabia as a special envoy, that too under such critical circumstances, showcases how he is functionally acting outside his official jurisdiction. His visit to Saudi Arabia, amidst the backdrop of Osama’s death, was indeed very crucial and the high powered delegation that met him goes on to reveal that the meeting was not the usual exchange of pleasantries.

If our interior minister, who is entrusted with maintaining law and order inside the country, somehow manages to carry out both functions; then this begs the question: Who Needs a Foreign Minister?