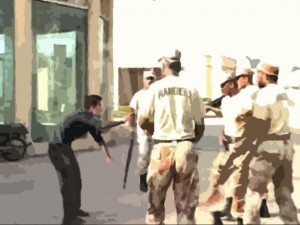 This video is everywhere, all are sharing and all are condemning it, but who knows if it is just a real life horror show for one’s amusement. I do not know because I am not finding enough courage to watch it, but I know what it contains, what has been done and how it could have been done.

That could have been a video made in Baluchistan or a Rural area elsewhere or any other city (and I am sure people would have responded in same manner, most are spreading it like idiots on social media, a real horror show), these events happen all over country every now and then, cold blooded murderers are roaming around the country and people keep quiet. They keep quiet and that is the whole point, and that is the real issue and real issue to be condemned.

Someone remarked why no one helped him? No one tried to help him, because those gunmen were circulating him and they had just shot him, who could dare to intervene in such situation? And those bastards (if you allow me to use the right word) were so much overcome with anger and hate they passed to stage of empathy and could not realize what they have done. I am sure same is the feeling and behaviour of all those killers who kill helpless anywhere else.

They do not follow any SOP at all, they are not taught to follow SOPs, they are taught and trained to manipulate rebels and state enemies, kuffars and traitors, that is how they look at the civilians whether in Sindh, Baluchistan, Swat or Waziristan or anywhere else, that is how armies conquer and rule, it is not by law but by force and by hook or crook.

Last but not least, we all should have all sympathies with poor boy, he is a poor victim, whatever he did, he had his rights, and he is murdered, we must cry for him, we must see ourselves in him and all those who are murdered same way no matter where, bleeding and dying helplessly. That perhaps will change our reflection.