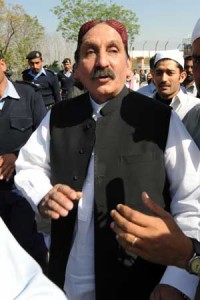 A Suo Moto action is a very serious and abrupt notice taken by a higher court where the interests of Justice are affected. One can’t help but feel bit cynical when a suo moto action is taken against an actress bringing in Alcohol in to the country. Not least because she is a member of a party formed by an arch adversary of the Chief Justice, and that similar and much worse actions by others, like Drugs bust in Dubai for Asif or Rahat Fateh Ali money laundering fiasco went unquestioned. Even for people caught in Pakistan, papers are full of stories of people caught with prohibited stuff; normally these stories get a small portion in back pages on a slow news day.

This is of course not the first instance of political partisanship showed by the courts. it all began with Maulvi Tameezuddin Case, where the court allowed an unconstitutional dissolution of Constituent assembly citing the Doctrine of Necessity. Courts afterwards continued to make “unlawful, lawful” under this doctrine and validated three subsequent Military takeovers. Even highly robust and lauded decisions such as Asma Jilani case, these decisions were taken after change of government when threat of disobedience was no longer operating and that these decisions favoured incumbent.

Judiciary’s pandering to executive is more obvious in cases which are of less constitutional importance yet they have an effect of emboldening the executive to expect Judges to be their lackeys and treat them as such. This is exhibited in the cases of many political leaders being arrested and sentenced to long imprisonment on trivial charges or in some cases subjected to imprisonment without a case being decided for years. This sort of behaviour only went to strengthen the governments of the day, especially the governments of usurpers. This behaviour in no way helped create a rule of law, and affected democratic governance because of defective checks and balances.

Understanding this problem, and given an opportunity by high-handedness of a much reviled Gen Musharaf, Lawyer’s movement in 2007 sought to make a stand of strengthening the judiciary to allow it to perform its role properly as is required of it under the constitution. This means being impartial in its decision making, and making robust decision based on constitution and act of parliament – a free and fair judiciary.

What has however since become is unfortunate pendulum swing to opposite end. The Court has been very strict in some cases against the executive, at times one would argue too strict. For example demanding price fixing, knowing, or ought to have knowing, that Pakistan has a relatively free market, and these prices are judged by those free-market mechanisms. There have been old cases of personal corruption heard against many members of cabinet which has embarrassed the government many times. On the otherhand there is conspicuously little interest in the cases against opposition leaders or their activities as government in provinces.

With Ms. Odho’s case we have another instance of Judiciary taking sides and censuring those who have been against the current Bench and its Chief. Such actions are seen by the public as acts of petty vendetta as people have become accustomed to have been (rightly) told that highest court of the state only takes Suo Moto of only matters of high importance. This is far from it.

What is more worrying is however another trend that current bench has observed in past couple of years. That is the conspicuous trend of use of Islamic provisions in the constitution to justify a decision of the court. It is worrying for three reasons, one that many of the Islamic legal provision have ability to be interpreted in different ways, according to one’s own sect. This thus creates problem of legal certainty.

Secondly there is the problem of dereliction their duties by common Law judges of applying law according to Islamic jurisprudence. The latter has a civil law inclination, and that it creates a high degree of confusion among lawyers, jurists as well as the lay people.

And finally, most importantly of them all, is the ostentatious islamisation of the offices of the state by state actors. It is not just being observed by the Courts, but also by the Armed forces, Police and bureaucracy. Politicians were always on this page, and this is uncontroversial as it happens everywhere.

It’s not only a problem of people being awkward and very showy of their religious credentials. It is also a Problem is that then we have Taliban sympathisers in these high offices of the state, willing to be lenient to extremists. Because they have a different, limited world view coupled with belief in conspiracy theories and mistrust of anything “secular”. We have instances of leniency shown to caught terrorists by the courts, and allowing them bail or even quick dismissal of case. Catching of plotters within the armed forces, as was the case in PNS Mehran and embarrassing ‘Leaks’ that emerge from interior or foreign ministries, time and again. This trend may also explain why many judges are unwilling to hear the case against killer of Shaheed Salmaan Taseer.

If this is correct, then these are omens for harsher times to come, because use of religion to justify acts is mired with immeasurable problems, complexities and unrest. Exploitation of Religion in past by Zia Ul Haq brought in death and destruction to the country, something that we still are suffering from. Its use in Afghanistan brought curtailment of civil and political freedoms and destruction in a country already destroyed by war. It also saw hyper-inflation and was on verge of economical breakdown before the attack on that country in 2001. Religion is powerful and is important to people, and it affects people’s emotions.

Thus questioning a decision allegedly made on religious pretext is questioning the religion itself, which then becomes a personal crisis. Because if actions taken on religious pretext are unjust, then the religion itself becomes unjust, that would be unacceptable to any believer. The master exploiters are taking advantage of this vulnerability. They are in fact given Carte Blanche, because bad decisions are justified because they are ‘Islamic’, without much thought given to it, and any dissent is muffled by pressure or, if that fails, through taking of life.

Rise of this trend is surely ominous, and it’s worth realising the effect it would have on our culture, political, civil life as we see with indifference a woman for whom we careless being dragged to highest court of land for a crime normally punished with a slap on the wrist.