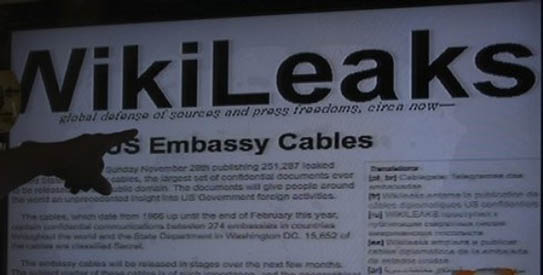 The United States (US) had blamed Jang Group of “consciously publishing and broadcasting false and inflammatory stories” against the US and its interests despite having a contract with the Broadcasting Board of Governors (BBG) and airing Voice of America (VoA) on Geo TV, revealed a recently released WikiLeaks cable. 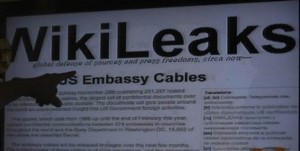 A man points towards the Wikileaks memos shown on a TV screen at an electronic shop in Karachi, Pakistan on Thursday, Dec. 2, 2010. Pakistan’s President Asif Ali Zardari sought a pledge from the United Arab Emirates to allow his family long-term refuge, as they did for his late wife, if he died or was killed, according to a secret diplomatic cable released by WikiLeaks. (AP Photo/Fareed Khan)