The killing of Syed Saleem Shahzad is brutal confirmation that Pakistan is the world’s most hazardous place for journalists, whistle blowers and Independent thinkers.

Saleem Shahzad’s kidnapping a week ago and his later brutal murder sparked off speculation that he was killed by the ISI, which was apparently unhappy with some of his writings on Islamist groups and their connections with the country’s premier spy agency.

Pakistan’s news media naturally see the Shahzad killing as an unambiguous attempt to intimidate them and silence dissent. The state and it’s pro-status quo camp is silencing the voice of change and the independent thinking because it is afraid of the truth. That is why the profession of journalism is so dangerous in Pakistan. Here, when a whistle blower challenges the powerful institutions and individuals excessively, he is eliminated and his voice silenced.

Foreign media, organizations and observers will always say that freedom of expression, critical approach and independent journalism is something alien to Pakistani state. 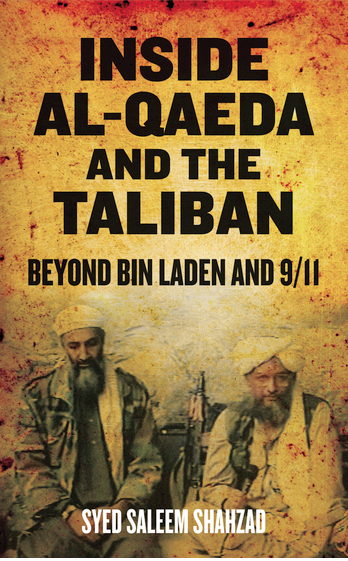 According to the news published in the “Pakistan Today“, the state of Pakistan has imposed an unannounced ban on a book written by slain journalist Syed Saleem Shahzad.

Per details, the book, Inside Al-Qaida and the Taliban, Beyond Bin Laden and 9/11, is unavailable at all leading book stores, with the shop owners saying its sales had been banned by the government.

Pakistan Today contacted the publishers, Pluto Press, situated at 345 Archway Road in London to inquire about the ban.

Pluto Press’ Sales Director Simon Liebesny said via e-mail that they could not deliver any statement in the current situation as their shipment for Pakistan was under process with the UK Customs.

“It is difficult to answer the question with any certainty from here. There is a shipment en-route to Pakistan for our distributor, but this has been held up on the UK Customs side. As this consignment of books is part of a much larger shipment I should stress that the book may have absolutely nothing to do with it,” he said.
“Therefore it has not yet landed in Pakistan, but if the Customs in the UK give the shipment the all clear, then at least it will have passed that hurdle. I cannot speak for what is happening in Pakistan, I know no more than you at this point.”

Pluto Press said the book was launched on May 20, 2011. It wrote in the description of the book that “President Obama has delivered on his campaign promise to kill Osama bin Laden, but as an al Qaeda strategist, bin Laden has been dead for years.

This book introduces the new generation of al Qaeda leaders who have been behind the most recent attacks. Shahzad, an investigative reporter, had a level of access to al Qaeda and the Taliban that Western journalists could only dream of. He had interviewed many top-level strategists and fighters in both movements on multiple occasions in Iraq, Afghanistan, Pakistan and Jordan. In Inside Al-Qaeda and the Taliban he uses first-hand accounts and his own local knowledge to build up a convincing and compelling picture of the aims and motivation of the leaders and fighters in radical movements. This is a version of the war on terror that has never been told. It will fascinate anyone concerned with the strategy and tactics of the most controversial Islamic movements”.

News report also claims that the officials of the Interior and Information ministries refused comment on the issue.