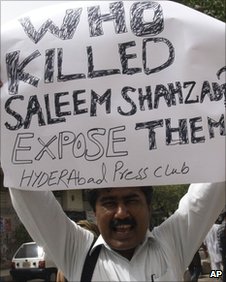 Then they came for me -by Babar Sattar

Pakistan’s dreaded spy agency, the ISI, is back in the spotlight, accused of murdering journalist Saleem Shahzad. The agency’s engagement with the media has become progressively more virulent as the “war on terror” has progressed. BBC Urdu editor Aamer Ahmed Khan asks whether anyone can bring the ISI under control.

ISI officials deny involvement in the murder of Saleem Shahzad. One said there is nothing sinister about their reported contacts with him. The agency, the official said, is mandated to remain in contact with journalists “for provision of accurate information on matters of national security”.

But he would be hard pressed to find a Pakistani journalist willing to buy that – unless we agree that “sinister” is a matter of perspective.

I once received a phone call reminding me what a lovely family I had after I published a story for The Herald magazine on ISI-Taliban links. It had clearly upset someone at the ISI.

A panicked phone call home established all was well – and a few more calls to the relevant people from my powerful publisher ensured that the man who introduced himself as Col Tariq never called again.

But there was a catch – I had to go to the ISI’s heavily fortified headquarters in Islamabad and meet the “internal security” people there. I could not shake off a creepy feeling that someone in the building had ordered that my family be monitored and watched.

Shot in the head

Spend an evening in any press club in the country and you are likely to walk away with stories that will sit comfortably in the pages of an underworld chronicle.

Tales of journalists who were made to write suicide notes for reporting on the suspected presence of India’s most wanted man in Karachi. Accounts of correspondents who became hit-and-run victims after reporting on the agency’s involvement in electoral malpractice.

I still remember the time when our tribal areas correspondent was picked up by the ISI and only released after being severely tortured for more than 36 hours.

Within the first few hours, we had made contact with every government official we knew, from the local police officer to the interior minister.

And it was only when they stopped answering our calls that we realised it must have been the work of bhai loag or “brothers”, as ISI officials are commonly referred to.

In between, I received a call from a journalist I knew was in close contact with the ISI. He told me that a dead body fitting my correspondent’s description had been taken to a hospital in the garrison city of Rawalpindi and that we had better check it out.

It took me 40 minutes to drive to the hospital, 40 of the most difficult minutes of my life as a journalist. When I saw the dead body, I could have hugged it.

I was so relieved that it wasn’t my colleague. And when he was released the next evening, I found myself saying a silent thank you to his tormentors for letting him live.

Then there were the three bizarre days I spent in North Waziristan in July 2006 after a 30-year-old tribal journalist, Hayatullah, was killed.

He had been abducted from outside a local college, held for six months, then shot in the head and dumped by the roadside.

What struck me about that incident was that everyone in the area seemed to know the exact identity of his kidnappers.

Some even mentioned a name, supposedly an ISI major who, it was said, would often call Hayatullah’s family and tell them that he had not yet made up his mind whether to release him or kill him.

It is not without reason that Saleem Shahzad’s death has immediately led to allegations against the ISI. The entire journalist community in Pakistan knows how closely the agency monitors media and journalists.

They also know how immensely powerful it is, the extent of the immunity it enjoys and the fact that journalists are only a small part of its overarching remit.

Nearly 200 political activists have been abducted, tortured and killed in the troubled province of Balochistan over the past two years merely for demanding their political rights.

Their families are almost unanimous in their opinion that the ISI is involved. Yet the killings continue unabated.

Even the Supreme Court has tried to intervene to recover some of those kidnapped – but to no avail. It has merely come to be known as the case of the missing people.

Former ISI officials proudly recount tales of how they engineered political alliances and brought down elected governments to “protect the national interest”.

Yet after every general election, politicians from all political parties make a beeline for the ISI headquarters in the hope of securing a place in the cabinet.

The present government made a feeble attempt last year to bring the ISI under the control of the interior ministry.

But the agency reacted so sharply that the notification was withdrawn within hours. Since then, it has been business as usual.

In the aftermath of Bin Laden’s killing, the current ISI chief, Gen Shuja Pasha, offered to resign after publicly admitting a complete intelligence failure. His offer was politely declined not just by the army chief but also by the entire parliament.

Still, there are some incorrigible optimists who believe that Saleem Shahzad’s death can change all this. They point to the growing public criticism of the agency, fuelled by a steadily rising anger within a very dynamic media at its total lack of accountability.

One of Pakistan’s most influential and respected publishers, Hameed Haroon, told the BBC that the situation had reached breaking point. “This has to end,” he fumed. “They cannot treat our journalists, our intellectual assets like this.”

The question is, who is going to end it?