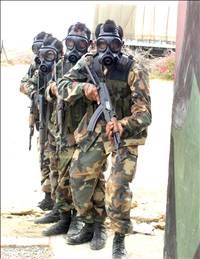 Despite Gen Zia’s Islamisation, the promotion of piety in the barracks, and the support for puritanical movements that were allowed to organise sermons, the armed forces have still essentially retained a secular outlook. Institutionally, religion might be used as a motivational tool, but it is not allowed to guide the organisational strategy or goals. Intelligence networks help purge out the radical members of the forces.

But there have been many instances when radical Islamists have penetrated the armed forces and other law-enforcement agencies and threatened the state security mechanism. It is very well known that the lower ranks of the Punjab Police in district of Southern Punjab suffer from an infestation of sympathisers of militant organisation and this hurts the policing ability of the force. That was evident in the 1990s, when the Punjab Police was at the forefront of the war against sectarian terrorism and lower ranking officials had collaborated with the banned outfits on numerous occasions to tip them off or facilitate counter-attacks. An offshoot of the Shia militant organisation Sipah-e-Muhammad was led by a retired major, Ashraf Ali Shah.

In the two assassination attempts on former president Gen Pervez Musharraf, the PAF arrested 57 soldiers (Dawn June 25, 2009), five were awarded death sentences (mostly corporals, junior technicians), one army jawan (from the DSG) was hanged. Others, awarded sentences of varying lengths, included two soldiers of the SSG. Explosives used in the first attempt were in fact stolen from a PAF depot by one of the convicted airmen (Daily Times February 25, 2005). Some of the airmen were sermoned to radicalisation in-house and others “got a one-year leave on the pretext of accompanying the preaching groups, but when they were later arrested, it transpired that they had in fact been training with different militant groups” (The News May 24, 2011). Another three young airmen were sentenced for association with the banned Jaish-e-Muhammad in the arrests that followed (Oct 19, 2005).

The assassination of ex-GOC of SSG Maj Gen Ameer Faisal Alavi was plotted by a retired major, Haroon Ashiq. After joining the Lashkar-e-Tayyba, he moved on to work with Ilyas Kashmiri of the Brigade 313 linked with Al Qaeda. Ashiq’s own brother, Captain (r) Khurram, had retired from the army only to join Taliban and other fighters in Afghanistan. He was killed in 2007 in Helmand province. Various other retired soldiers, many of whom had liasioned with the Taliban during the ‘90s, returned to Afghanistan to fight on voluntary basis too.

Maj (r) Ashiq is not the only officer with links with Al Qaeda. In 2003, Major Adil Qudoos of 45 Signals was arrested and later sentenced for being linked to the militant network. The infamous Khalid Sheikh Muhammad was arrested from the house of his brother in Rawalpindi. Linked to this web of militants were Lt Col Khalid Mahmood Abbasi of Signals, Lt Col Abdul Ghaffar posted at the Army Aviation Command Rawalpindi, Maj Ataullah Khan Mahmood from the Judge Advocate General (JAG) branch, Major Rohail Sarfraz of HQ II Corps and Capt Dr Usman Zafar. The first three were given various sentences while the latter were dismissed from service.

More recently, retired Maj Abdur Rehman Hashim Syed has been found to be conclusively involved in planning of the November 26, 2008 Mumbai attacks in some way and planning attacks on a Danish newspaper. Connected to the LeT, he was arrested by the authorities, but his current status remains unknown.

Another case of high level militant infiltration involved Col Shahid Bashir, retired Sq Ldr Nadeem Ahmed Shah (a member of the Rawalpindi bar) and a civilian employee of the Air Weapons Complex (AWC). Associated with the proscribed Hizbut Tehrir that is gaining membership amongst private university students across the country in alarming numbers, they are accused of spying on, leaking info about and planning attacks on the Shamsi Air Field. Muhammad Altaf, a civilian employee of the National Development Complex (NDC) that comes under NESCOM and deals with ballistic missile development was similarly arrested for alleged links with a banned outfit. His status remains that of a “missing person” (Dawn News TV “Gumshuda”).

One of the most alarming factors is that the approver for the prosecution, who was the militant given the duty to provide raiders for the attack, was none other than Qari Saifullah Akhtar, an ex Harkatul Jihad Al Islami militant who is now linked to Al Qaeda and was named by Benazir Bhutto as being involved in the attacks on her life.

Radicalization in the lower ranks is equally worrying. Investigation by Dawn in May, 2010 showed that the deadly Jundullah that carried out the assassination attempt on V Corps Commander, later VCOAS Gen Ahsan Saleem Hayat, was raised by serving and ex-soldiers of the army and the PAF. Jundullah has become famous as a small but deadly force.

Constable Sheikh Muhammad Adil of the Sindh Police Special Branch was convicted in 2002 of being involved in the murder of Wall Street Journal reporter Daniel Pearl. A member of the HuJI whilst serving in the police, Adil assisted in the act of kidnapping. More recently, the section in-charge of the Computer Section at the Special Branch of the Punjab Police was found to have militant links. Accused Junior Clerk Zahid Bajwa had been recruited on a fake domicile and had a case pending against him for possession of explosives. Posted at the HQ of the Special Branch, he had access to intelligence reports and security plans, a cause of extreme worry. A constable was arrested in 2004 for being linked to the network of militants that aided Al Qaeda operative Ahmed Khalfan Ghailani in Gujrat.

These cases are just the tip of the iceberg. While the armed forces have been somewhat successful in purging militant sympathisers from within their ranks, the case of police has been extremely worrying. The case of Mumtaz Qadri alone is sufficient to become a cause for worry. During the trial of the CIA contractor Raymond Davis, one of the policemen from the escort that brought Davis to court was proudly wearing the badge of a militant organisation on his chest. Even after being furiously admonished by the judge, the policeman refused to remove the badge from his uniform and nobody was able to do anything. Such cases are a cause for fear and should not be taken lightly.

The author is a free lance contributor based in Illinois, USA.