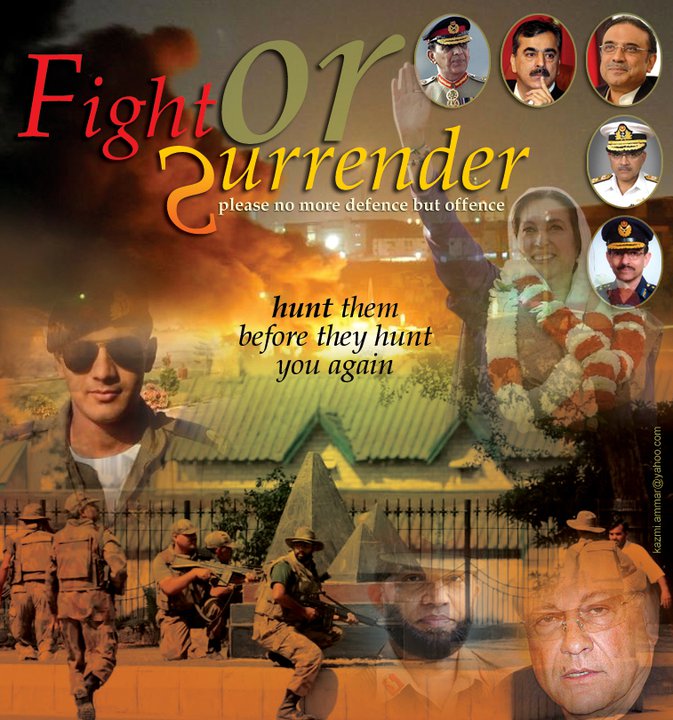 Army, Police & Others have arrested 2500 (khudkush) suicide bombers but there is no one who can dare to trial them! Some judges are scared & some are in their favour. Finally they all will be released due to lack of evidence & witnesses.

A Senior Superintendent of Police told that they and army arrested some terrorists of banned organizations for three times but every time the courts granted them bail yet they were killed in swat while fighting against army & police.

I don’t know which system & what constitution people are talking about? They are hiding behind both. We are not in normal state but in war of survival. You have to be innovative other wise your idealism may not have anymore things like constitution & state etc.

Defensive strategy is a total failure now army needs to be offensive rather than just waiting for terrorists to attack them. They need complete action from Karachi to Khyber, North Wazirastan to Southern Punjab, on every inch of motherland without the lust of dollars & foreign aid just for our own survival, liberty & integrity. Catch them from their breading centers. Close all hatcheries of terrorists. Clean your forces from Gen Hamid Gul & Gen Zia ideology. We are all Muslims; expel missionaries (Tableghis) who were purposely appointed by the previous army establishments.
Refuse all foreign help including America just like Pakistan Naval commandos who didn’t allowed other commandos to take part in final assault against terrorists for their honor & dignity. Live with pride & die with honor.

It’s not about martial law or extra-constitutional things. Pakistan Army is also a victim of their self created evil. But it doesn’t mean that we see all the destruction silently as they created them in past. Taliban & Jihadits are killing every living creature & we all know that most of them are from our homeland. I’m just saying that one has to be innovative & not to be “Lakeer ka faqeer” we have our own problems & we can’t follow the theoretical democratic stuff in this blood loathed war. To be honest your mirror is best judge of your acts, almost everyone has seen the vampire face of its own society on the assassination of Salman Taseer. If you can’t then remove the dust of your mirror & see the barbarians face of your nation’s extremists through the eye of whole humanity. Don’t live in state of denial it will not give you anything.

We don’t have third option & much time! Fight or just Surrender.