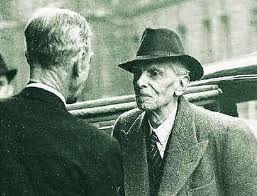 Americans roam in Pakistan and treat the country as their colony because nearly 65 years ago the founder of Pakistan saw the United States as a saviour and defender of his new State.  Just before the division of the Indian Subcontinent, the British trained lawyer and leader of the All India Muslim League, Muhammad Ali Jinnah, had communicated to the U.S government that Pakistan needed the U.S support and the new country could be a frontline state against the Communist Soviet Union.
On another occasion, describing the future relations between India and Pakistan, Mr. Jinnah had said that the relationship between the two countries would be similar to Canada-U.S relationship. Ironically, indeed, it was Mr. Jinnah who had supported the military intervention in Kashmir in 1948 that resulted into the first conflict between India and Pakistan.

Mr. Jinnah was a champion of democracy and yet it was him who had dismissed the provincial government of Dr. Khan Sahib in the North West Frontier Province soon after the independence.

Also Jinnah had no clear idea what kind of Pakistan he wanted. At one time he implied that Pakistan would be a secular state but on other occasions he gave an impression that Pakistan would be an Islamic country. Mr. Jinnah was a stubborn man with big ego. He was sincere but perhaps he did not have an opportunity to explain his vision of Pakistan. Apparently he had mixed perceptions about the future shape and form of the country which he had created.

In the twilight of the British empire Mr. Jinnah had taken Pakistan into the U.S camp to resist nationalist sentiments and movements that were sweeping across the region from the Soviet Union and China to India.

Since Pakistan accepted to be a U.S proxy against the Soviet Union and its ally India, the American presence in Pakistan was natural.

Zulfiqar Ali Bhutto had identified mistakes of Mr. Jinnah and his successors. He understood that Pakistan’s total dependence on the U.S was harmful for the country. Mr. Bhutto deviated from Pakistan’s one dimensional foreign policy; it was one of his major achievements.

Mr. Bhutto laid foundations of Pakistan’s relationship with China. He negotiated peace with India in Simla. Mr. Bhutto’s nuclear ambitions were aimed at peace, not war. He established relations with the Soviet Union and found new alliances in the Third World. He came up with the novel idea of an Islamic Block. Obviously, Washington was not comfortable with Mr. Bhutto’s foreign policy goals and saw him as a nationalist leader who wanted an independent course for Pakistan. The Americans could not afford that.

In the 1970 elections, the people of Pakistan had rejected Jinnah’s Pakistan that was unreal and unmanageable. The electorate had also rejected the ‘ideology of Pakistan’ that was created by the military.

After the breakup of Pakistan, Bhutto gave a new identity to the country and tried to clear confusions and ambiguities left by Mr. Jinnah. Mr. Bhutto did it at a time when the military and Jamat-e-Islami were promoting and propagating a bogus ‘ideology of Pakistan’.

Bhutto became a threat to vested interests of the ruling elites and Pakistan’s foreign sponsors. Consequently, the Pakistani military with the help of rightwing parties and nationalist forces formed an unholy alliance against Bhutto. The 1977 agitation was based on a false and confused agenda and its actual target was Z.A Bhutto.

Actually, Pakistan broke for the second time on April 4th, 1979 when Mr. Bhutto was physically eliminated. Since then the country is at war with itself. The mindset developed during the Zia era is our biggest enemy now. We have become a society of disillusioned and disoriented people. We blame outsiders for our problems. We challenge other cultures and societies without offering an alternative political, economic and social system. We do not have means to challenge or threat others but we think and act as a superpower.

Our shallow superiority complex, empty pride and big egos could be causes of our troubles. We are not at ease with our identity and place in the world. Also as a society we don’t seem to have a clear vision and practical solution for the psychological dilemmas that are hampering our growth as a nation. Inner conflicts and contradictions are eating up Pakistan fast.

We hate the West and at the same time we also aspire to be like them. While communicating with a Westerner many of us try to speak ‘better’ English than the natives. The funny bit of it is that we open our hearts in front of ‘gorras’ and criticize other Pakistanis and talk about our weaknesses and at the same we complain about the West.

Indeed we have become a strange mix of pride and guilt; insecure and impulsive people with confusions about our faith and national identity. To my mind, the solution to our contradictions and bewilderment resides inside us but we are looking for outside cures. It is hard to find two Pakistanis who do not talk about politics–national and international. Often they disagree in a tribal way. Probably each of us has solutions not only for the problems of Pakistan, but of the whole world.

Pakistan is at a stage when internal unity is a way forward. The unity can only be achieved by a wider consensus in the society. The parliament, politicians, military, judiciary, civil bureaucracy and the media are all stakeholders and players on the Pakistan’s political chess board. The society is divided and fragmented along different lines. In such circumstances only a broad and flexible agenda would work where people can agree on minimum points.

Some of us may not like the military’s power, actions and its role in the country’s affairs but the military can’t be ignored totally. No one can clip the military’s wings over night. The military has a role in Pakistan but generals alone can’t handle the mess, which in fact is created by them. Pakistan has reached to a point where the military cannot sustain its dominant role in the society and it has to give space to other players in setting the national agenda.

And why we think that only western democracy is suitable for Pakistan. Some of us give examples of Indian democracy and say if it can work in India why it can’t work in Pakistan and that is one of our problems. We have love-hate relationship with India. It is not necessary to follow the Indian path or copy the West.

From Russia and China to Malaysia, Turkey and Singapore there are many other models where different stakeholders play role in the system by mutual agreement. May be Pakistan needs a political system which is different than its current and former masters and enemies?

Perhaps establishment of a national forum that represents different segments and shades of the society would be a good idea. Parliamentarians, opposition leaders, military and civil service representatives and members of intelligentsia can discuss contours of a new national policy and agenda on such a forum. They can send their advices to the government and parliament on issues of national importance.

Our first and top priority should be positive changes in the foreign policy. Pakistan must give up its current India centric foreign policy. We need new rules of engagement with India and gradual end of hostility towards India. The military will have to play a key role in achieving this goal. It is absolutely pivotal for Pakistan’s bright future.

The second problem is Pakistan’s economic dependence. As a client state Pakistan has huge internal and external debts and it relies on conditional foreign aid and subsidies. We are stuck with Saudi Arabia, for example, because the Kingdom supplies us free oil. Economic dependence limits our choices.

Pakistan is surviving because of its black economy. It is a sign that a vast number of Pakistanis do not respect their country and do not trust the State. Many people do not pay taxes and avoid being responsible citizens but they like to complain and point fingers at others. And those who are sincere with Pakistan, they are victims of other confusions that colour their thinking about their place in the world. Some of the grievances and complaints of the Pakistani public are justified but others are not. Again there is a huge gap between perception and reality. Complaining, criticizing and thinking negatively will not lead Pakistan out of its troubles.