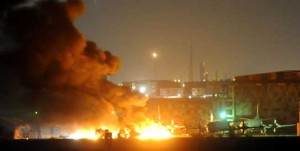 Pakistan has once again been beset with yet another terrorist attack undertaken by the frankensteins that are have been created and still being protected by the powerful security establishment. The day began with the news of two more Shias (both lawyers and brothers) being killed in Karachi by groups like Lashkar e Jhangvi that are allied to the Taliban and Al Qaeeda.

Karachi has also been the location of Imran Khan’s 2-day dharna whose attendance was bulked up the Jihadi groups allied to the Taliban like Sipah Sahaba and Laskhar Tayaba (renamed Jamat Dawa). The centrepiece of Imran’s dishonest political posturing is to condemn the killing of the Taliban by drones while blaming the 35,000 victims of Taliban violence on America and the elected government. In his harangues, Imran Khan is careful to avoid mentioning the double game being played by his political mentors and backers, the ISI. The ISI uses failed Islamist politicians like Imran Khan to highlight to the world that there is an alternate political force in the country aside from the PPP which they should accept now.

In the last few hours, it is not yet been confirmed if the situation is under control and if the terrorists killing Pakistan’s Navy engineers and personnel have been brought under control.

However, one thing is glaringly obvious. The security establishment’s continued support of the Taliban and of the use of violent Jihad as a tool of foreign policy needs to be scrapped. In this regard, the ISI has greatly weakened the elected government via its Judiciary and a media that takes its direction from ISPR has obfuscated the existential threat to Pakistan from violent religious extremism.

The world community needs to come to grips with the fact that the security establishment is unwilling to change its total support for the doctrine of “strategic depth” in Afghanistan and Kashmir via the Taliban. As the violent attacks clearly illustrate, the elected government is a hostage to this policy. Furthermore, a severely compromised media and an intellectually and morally degenerate intelligensia have created an enabling environment for the security establishment.

In the last 3 days, Pakistan’s largest corporate, feudal entity and the highest paid entity is busy promoting and supporting Taliban ideologues like Imran Khan to blackmail NATO. Instead of this, it should have been ensuring its own safety and that of the civilians for which it has been amply paid by the Pakistani tax payer.

By promoting Imran Khan’s dharna of Taliban activists and sympathizers, the security establishment has weakened itself and the Pakistani nation.  It is the establishment that has created utter confusion in the minds of ordinary Pakistanis and today, they are clueless as to who Pakistan’s real enemies are.  Instead, our educated elite are awash in conspiracy theories and a warped sense of nationalism.   For decades they have been fed concocted myths that define patriotism as a martial, supremacist and Salafist view of religion.  They have been brainwashed into glorifying murderers and this makes many of the educated elite more amenable to generals and failed Islamist politicians who fuse their discourse with false machismo.

This most recent attack is a direct result of enabling the  religious extremists by events like Imran Khan’s dharna.