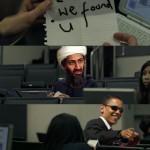 Going a bit further, what did Mr. Bin Laden do for Pakistan in the first place? Did Mr. Bin Laden build schools, hospitals, mosques, pharmacies, colleges, universities or flood control canals? No Sir, no such thing. The devoted lot of Mr. Bin Laden did one thing for sure. Took their personal vendetta towards the US, on center stage of this world by causing 09/11 and the rest is all history.

Its a free country and yes every one has a say. Everyone has a right to have their voices heard. That’s what democracy is all about. Stifling any dissenting viewpoint, goes against the basic tenets of the will of people.

Having said that, one has to give it to the so ever charged and emotional crowd, chanting and defending the sanctity of our “Armed Forces.” The most ludicrous angle of this whole thing is that it is perceived a sacred cow and no one has the right to question its performance. Not even the public who almost gives their 50 paisas on every Rupee they earn to their Jawans. It is ironic that supposedly the defenders of the public, consider it “unpatriotic” to respond to those, who they have promised to protect and serve.

Let’s dice this argument of sovereignty for a moment. So the Americans flew in to Abbottabad, got their job done. They were undetected by the radars, supposedly based on their technological superiority. But let’s dig a bit further. What were they in Abbottabad for? What did they accomplish and what did they part with?

If the Americans would have done something fishy to begin with, such as caused havoc in the capital or disarmed the “priceless nuclear assets”, all the hue and cry was warranted. If anything, we should be thankful to them for getting a despicable character off the world. The same person who gave two hoots to the lives of many including our own brethren.

Going a bit further, what did Mr. Bin Laden do for Pakistan in the first place? Did Mr. Bin Laden build schools, hospitals, mosques, pharmacies, colleges, universities or flood control canals? No Sir, no such thing. The devoted lot of Mr. Bin Laden did one thing for sure. Took their personal vendetta towards the US, on center stage of this world by causing 09/11 and the rest is all history.

From there on what unfolded in Pakistan is common knowledge. We must be the most naïve nation in he entire world. The entire Arabian Peninsula is perhaps taking a sigh of relief, after his passing. However on our end we are mourning him like he was the best thing that ever happened to our gifted nation. The lawyers at Lahore High Court, who showered petals at a murderer, Mumtaz Qadri were going a step further by saying Bin Laden’s prayers in absentia. Some deluded channels were glorifying him as the greatest martyr. The infamous Jamat ud Dawa with thousands of protesters were singing his praises.

The same martyr had openly declared a war against our forces, ever since Musharraf made the tough choice. Now our uniformed forces are speechless, as the same man was found in our backyard and was killed by the Americans. So the protest and solidarity with our forces is in a way an admission that, “yes you screwed up, yes you were asleep when Americans came in, yes five plus years the special guest was here and yes the entire world is staring at us with disgust, but we still love you.”

To take a step further, the same people who are singing praises of our Khakhi’s epic failure are also diminishing the villainy of the infamous martyr by singing his praises as well.

This is the most perplexing angle of this entire episode. This is what the rest of the world is questioning. How could you glorify a mass murderer who has killed thousands of people around the world, including Pakistan and then absolve your armed forces for their blunder, of keeping a special guest with a unique notoriety. By raising the hollow sovereignty slogan, all these demented “so called patriots” are saying, Americans had no right to come in, our forces are capable of taking such characters down. So please make up your mind, was this a martyr or a villain, who our valiant soldiers would have targeted in no time. No Sir, you can’t have it both ways.

The biggest blunder is not that our heroes were unable to detect the American choppers. It is their inability to protect their own citizens from the enemies within. The enemies who strike ruthlessly at any place with rather impunity. If a citizen feels unsafe in its own country, then what are the “armed forces” for in the first place?

The dilemma is, now the whole world is unwilling to buy our excuses and honor laced sob stories. The war on terror is not a “war in error.” It is for Pakistan and for every Pakistani’s survival. Even our parliamentary hearings were a major disappointment. Where the same old drum was beaten and over beaten about faith in our forces. It is about time that elected officials and the forces listen to their people and protect them. As it is part of their duty and a sacred covenant of their oath.

D. Asghar is a Pakistani American. A Mortgage Banker by profession who loves to write as well. He blogs frequently at popular South Asian websites. A repository of some of his scribbles is http://dasgharspoliticalprism.blogspot.com/. He can be reached at dasghar@aol.com.