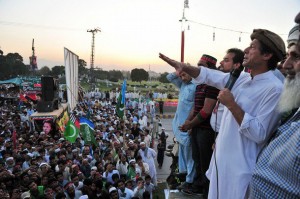 As the date for the drawdown of NATO troops in Afghanistan nears, some Pakistani ex-servicemen and cricket hero turned politician Imran Khan are working on a two-pronged plan to prevent the movement of logistical supplies for NATO troops in Afghanistan through Pakistan. On the one hand, Pakistan’s Inter-Services Intelligence (ISI) is encouraging Imran Khan to lead right-wing and jihadist groups to stage sit-ins so that the supply route to Afghanistan can be blocked whenever desired, while on the other hand it is encouraging the Lashkar-e-Islam (LI) militant group in the Khyber Agency to accelerate jihadist activities there to render it impenetrable for trucks carrying supplies to NATO forces in Afghanistan. [1] Former ISI chief Lieutenant General Hamid Gul is the chief handler of this operation (for Gul, see Terrorism Monitor, January 28).  Gul held a meeting with some former servicemen and jihadist commanders in Swabi (Khyber-Pukhtoonkhwa province) in mid-April where they decided to increase their efforts to interrupt the supply route. [2]

Small right-wing parties and jihadist groups have been building public opinion and applying pressure on the Pakistani government to have the drone attacks stopped or to limit them to militants opposing the Pakistani Army. Recently, the ISI gave the go-ahead to Hamid Gul to implement the plan to block the main highway used by the truckers who carry supplies to Afghanistan through Khyber-Pukhtoonkhwa province. According to Gul’s plan, Imran Khan was to call for a two-day sit-in to block the highway in Peshawar on April 23-24 (For Gul’s relations with Khan, see Asia Times, April 20). Although the sit-in was launched with a lot of fanfare, it failed to attract large crowds. Only a few small parties, such as the Tehrik-i-Istiqlal of Rehmat Khan Wardag and the Jamiat Ulema-i-Islam, led by Maulana Samiul Haq, publicly announced their support (Dawn [Karachi], April 23). However, some members of the Deobandi jihadist parties, including the Sipah-e-Sahaba Pakistan (SSP), Lashkar-e-Jhangvi (LeJ) and Harakat ul-Jihad al-Islami (HuJI), were at the event. [3] Although the popular Imran Khan had been predicting millions of people at the sit-in, observers put the number at between 3,000 and 4,000.

Nevertheless, the Pakistan Tehrik-i-Insaf (PTI – Pakistan Movement for Justice), founded by Imran Khan, has announced a second attempt to block NATO supplies with a two-day sit-in on May 21-22 in Karachi. The announcement came in response to a U.S. drone strike that killed 15 people in North Waziristan on May 6 (Express Tribune, May 8).

In his address to the April sit-in, Imran Khan vowed to continue staging such events until the United States stopped drone attacks in the Pakistani tribal areas. He asked the government to abandon its policy of hypocrisy and openly oppose the drone attacks. Khan threatened that if the Americans did not stop the drone attacks, his party would march on Islamabad (Dawn, April 24; April 25).

In an interview with an Australian daily, Khan demanded that Pakistan reject further American aid:

“The biggest lesson to learn [from the U.S. raid in Abbottabad] is that Pakistan should stand on its own feet, say no to aid and be a sovereign country. Our government policies have been dictated by aid, they have enslaved us by aid… If the government had roots in its own people and was not perceived as an American puppet, then you could control terrorism in Pakistan… As we have been accused as harboring the world’s biggest terrorist that means any act of terrorism that takes place anywhere, all fingers will be pointing at Pakistan” (The Age [Melbourne], May 12).

General Gul’s plan to block NATO supplies includes accelerating jihadi violence in the tribal areas, particularly in the Khyber Agency, where violence seems to be spinning out of control recently. The idea is to make it difficult for the truckers to pass through the Khyber Agency. The number of kidnappings and murders in the agency has gone up considerably in recent weeks. Attacks on security forces are also on the rise:

• On March 6, militants kidnapped four paramilitary personnel and killed one of them. His body was dumped on the roadside with a warning not to remove it for some time so that it would instill fear in the people (Dawn, March 7).

• A suicide bomber struck the funeral of the wife of an anti-militant lashkar member in Adezai (an area between Peshawar and the Khyber Agency), killing 43 people and wounding 53 (The News [Islamabad], March 14; Daily Times [Lahore], March 12, Dawn, March 10).

• Militants blew up a bridge, a school and a convoy of security forces on March 14 (Dawn, March 15).

• An attack on a paramilitary training center in Charsadda (near Peshawar) killed 98 people and wounded over 100 (AFP, May 17; The News, May 14).

• Five oil tankers carrying NATO fuel supplies were destroyed by a bomb in Torkham on May 13 (The News, May 14; AFP, May 16)

The killing and destruction unleashed by the militants in the Khyber Agency and its environs continues to this day.

The situation took a new turn on March 21 when Lashkar-i-Islam militants kidnapped Maulana Hashim, an Islamic scholar belonging to the Zakhakhel tribe, and killed him a day later (Dawn, March 23; seeTerrorism Monitor, April 28, 2011). This infuriated the Zakakhel tribe, which declared war on Lashkar-i-Islam. The advancing Zakhakhel militia attacked the LI and pushed them out of the Zakhakhel-bazaar area, presenting the group with a major setback (Dawn, April 3). The bloody fighting between the two armed groups continues as the Zakhakhel militia does not want to stop fighting without getting custody of the killers of Maulana Hashim (The News [Islamabad] April 6). The fighting has displaced hundreds of families in the Khyber Agency (Daily Times [Lahore], April 10). According to credible sources in Khyber Agency, it is the bloodiest episode of violence there in the last few years and has left the Agency unsafe for travel. [4]

In view of the emerging situation in the Khyber Agency and the expectation of further attacks following the assassination of Osama bin Laden, the United States and NATO may not find it easy to receive supplies through the Khyber Agency after they start drawing down their troops in July 2011. This route may not be blocked permanently, but it is not likely to remain open without interruption either. Some commentators and the main Pakistani opposition party, the Pakistan Muslim League-Nawaz, have accused the ISI of trying to make Imran Khan the next prime minister of the country. If the ISI succeeds in their plan to interrupt this vital supply route it may spell disaster for NATO troops in Afghanistan.