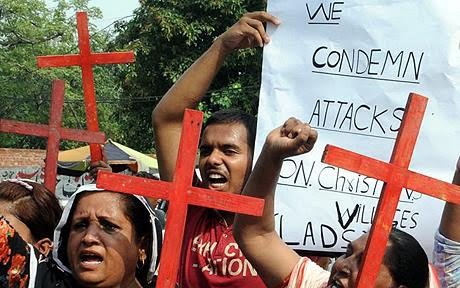 Two Christian nurses were seized and beaten for nine hours by an official of the Muslim Fatima Hospital in Lahore (Punjab), a wealthy Muslim landowner, with a history in politics, usurped the land and the houses of two Christian families in the city of Jalal Pur Jattan, in Punjab: such cases, local civil society reported to Fides, show that in Pakistan episodes of discrimination, abuse, violence, flagrant violations of fundamental rights on Christian minorities continue. Punjab, the “Masihi Foundation reports to Fides, deals with the rights of Pakistani Christians, it is one of the provinces where hatred and violence are felt the most.

In the first case, in the Fatima Memorial Hospital, two Christian nurses Nusrat Bibi and Muneeran Bibi, were assaulted and illegally detained by force in a hospital room, for 9 hours. They were accused of theft, but according to local sources, are clearly innocent and the charge was only a pretext to intimidate them, beat them up and sexually harass them.

After the traumatic experience of being kidnapped, the two women reported the incident to the local police station. “We condemn without appeal this physical and psychological violence that affects helpless Christian girls.

It is necessary that the government is committed in building a more tolerant society and respectful towards the rights of all, ” Haroon Barkat Masih, Director of the Masihi Foundation told Fides, and who is also dealing with the defense of Asia Bibi, the first Pakistani woman sentenced to death, unjustly, for blasphemy.

In another case of abuse against Christians, two families of Jattan Pur Jalal lost homes and land, torn and occupied by force from men of a wealthy local landowner, a former member of the Punjab Provincial Parliament. “The Christians were first threatened and then driven out by force,” said a local priest, Fr Naveed Dominic to Fides. And the police, informed about the violence, refused to intervene. “Even the local Church has been ordered not to interfere,” notes the priest.

The oppression of Christian minorities is a problem, note sources of Fides, it should be raised at a national level, through the Federal Ministry for the Harmony and religious Minorities, and at an international level, sensitizing the international community. Fr. Khalid Rashid Asi, a priest of the diocese of Faisalabad, in Punjab, explains to Fides: “The situation on human rights in Pakistan is very difficult and worrying. In this general context, particularly the Christian minorities suffer abuse and denial of their fundamental rights, on a social, economic and religious level. ”

In Punjab, Christians are 13% of the provincial population and run schools, hospitals, social institutions. Often powerful Muslims try to take control of those facilities by launching false accusations against the Christians or abusing the law regarding blasphemy.