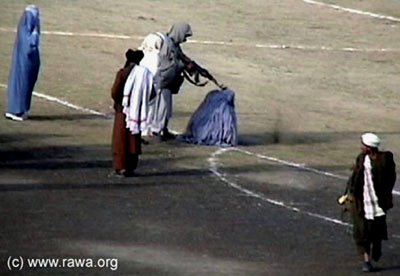 The article was published in the Daily Outlook Afghanistan before Abbottabad operation and killing of Osama but the reason to share it with the readers is to show how shallow the anti-terrorism efforts are if at the end we are ready to reconcile with the Taliban. The implications of any sort of authority handed over to them or power sharing with them will be disastrous for the people of Afghanistan as well as the region as it will work as a moral boost to them their allies in Pakistan to pursue their extremist agenda. (Editor’s Note)

Every year May 21 is observed as Antiterrorism day. The idea of World Anti-Terrorism Day was initiated because thousands of youth are drawn in to the folds of terrorist camps and organizations each year. The purpose of observing World Anti-Terrorism Day is to spread the message of global peace and non-violence, to discourage vulnerable youth from following cult practices and being misguided, commemorate and honor the sacrifices made by thousands of soldiers who fought against terrorists, pay homage to the victims who lost their lives in terrorist attacks, device ways and hold awareness programs to protect the future generations from radical influence.

These are some of the objectives I found on internet about the purpose of observing antiterrorism day. In spite of the efforts of the Pakistani government though educated youth refrain from terrorists activities but have they started thinking against terrorists. Many educated people though not in favor of anti-state activities but still they consider the mission of Taliban as the real effort against imperialism of the West. Still we have not convinced our youth about the dangers of fundamentalism and fanaticism.

Last day it was not wonderful to saw during a TV talk show that 80 percent people sitting there voted in favor of deciding international issues with haughtiness. Using haughtiness in international relations is kind of fundamentalism. Have many other issues solved with haughtiness? The same liberation of Kashmir movement which we consider just is always ignored by the world community. Now where is the fault? The fault is in our line of action.

On one side youths have soft corners in their hearts for the mission of fundamentalists and on the other side the government and international media are trying to convince them that terrorists are threat to the world security and peace. But what our young generation will think when they will come to know that US – the main player in the war on terror – is trying to reconcile with extremists in Afghanistan. Not only reconciliation but rather an authority is going to be handed over to Taliban in the Southern parts of Afghanistan. Now what will be our message on Antiterrorism day? How we will protect the future generations from radical influence?

Handing Over authority to Taliban

Our young people are already confused to see the distinction between good and Bad Taliban. Reconciliation will give them an impression that good Taliban has won the battle. They will consider Talibinazation a process that can bow the heads of super powers. It is already confusing that Pakistan, Afghanistan and US has different approaches towards good and bad Taliban. US has an advantage that the neighboring super powers have given her free hand in dealing with the issue of terrorism while Pakistan’s approach towards dealing with Taliban has no international support. Establishment of Taliban’s office in Turkey may also deprive Pakistan of its so-called strategic assets. The recent bilateral Pak-Afghan negotiations and Pakistani Intelligence Chief visit to US show that Pakistan and US have still different mentality towards the solution of terrorism. This difference of opinions can not generate strong antiterrorism sentiments in the youth. Rather terrorism itself becomes a controversial issue.

Weak support for antiterrorism is the success of all those forces which want the implementation of fundamentalism in our societies. The controversies of Pakistan and US in this regard only strengthen fanatics. Now fundamentalist will have the argument of dissimilarities of interests to support their own cause and it can help them to pervert the minds of young people. Reconciliation with extremists is not the cure of terrorism. It is true that if some extremists want to spend a normal life then we must help them to become a part of the society. But accepting them as group of “Good” Taliban is creating an abyss for the new generation where they can only think positively about fundamentalism.

It is a logical solution if Taliban become a political party and they go from door to door for election campaign but handing over them authority over an entire region smells a new conspiracy against the region. These officially permitted terrorist nurseries will only destroy the peace of the region. Reconciliation with Taliban will pull us back to the period before 9/11when Afghanistan was completely under the control of the Taliban and its international allies where women and girls were not allowed to get education and come of their home.

Farman Nawaz is a freelance Pakistani columnist. He can be reached at  farmannawaz@gmail.com

Click here to post a comment
Are security and intelligence state institutions above the law and beyond accountability? -by Arshad Mahmood
India: Christian journalist appointed to lower castes and minority programme monitoring body