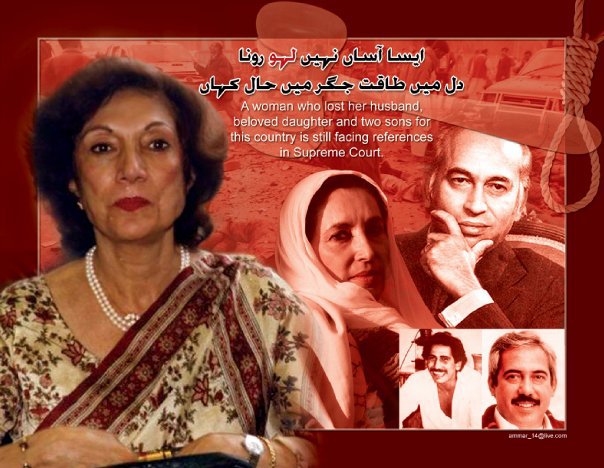 With the entrance of Asif Ali Zardari to corridors of Powers, all the hell broke loose. Establishment is annoyed, right wing political parties are in ire and Media is blowing fire against him. The remaining deficiency is bridged up by the Courts.

From NRO to the status quo of President, Courts seem waging a war against President Asif Ali Zardari. The entire efforts focus to dislodge Zardari; he has become a thorn of eye of all the bullies of courts, media men and Right wing political parties. They never intended to underscore any of the single folly of Zardari, infact they can’t. They have nothing to prove against him. They are all as crooked as dog hind legs, but they are so blind to see their filth.

The recent verdict of Lahore High Court shows nothing but a trick to hide their embarrassment. The verdict of LHC would be another blot on the stained past of judiciary. I wonder after 64 years, Judiciary remembered that the President of Pakistan shouldn’t actively participate in political affairs of the country. Where was the judiciary when Skindar Mirza used president house to promote the Republican parties interests? Why Judiciary behaved like a dumb and deaf spectator when Ayub Khan was chalking out political strategies for conventional Muslim League? Why Judiciary was in sound slumber when Ishaq Khan was on course of collision with Mohtarma Benazir Bhutto Shaheed? Why Judiciary did not intervene when President Farooq Lughari toppled the Benazir Bhutto’s regime?

If we look into today presidency of Pakistan we find it quite different from its past. Today all political parties are being entertained there and meetings for the growth of democracy are being held rather to hatch plots against democracy.

In fact the turncoat politicians and so-called free judiciary is afraid of well grown democracy and fully empowered parliament of the country as they all find their rescue in dictatorship and fragile parliament.

DG ISI told parliament that terrorists and killers in hundreds they caught but the judiciary freed them when bring before them for justice. We find our judiciary totally fail when the verdict comes against terrorists and find it very active when they have to decide against Pakistan Peoples Party and Co-Chairman President Asif Ali Zardari.

We also fine judiciary partial if the case goes against Pakistan Mulim League Nawaz Group. So far none of judiciary verdict came against Nawaz family and its political party. The Punjab Government is run by stay order since last three years and the file is being decayed in the shelf of Lahore High Court.

The prejudice by justice and judiciary is not only widening trust deficit among the judiciary and public as well as bitterly destroying its image once more in the history of Pakistan. Everyone knows inside Pakistan that for the freedom and restoration of judiciary the PPP has contributed the blood of its workers.

The verdict seems hilarious; President has already clipped his power and transferred his powers to Prime Minister and Parliament of Pakistan. First time in the history of Pakistan, a president surrendered his powers to Parliament, yet he is maligned. However, he is the head of the largest political party of Pakistan and in order to run the party affairs he cannot alienate himself from the affairs of a party running Pakistan.

As far the objection regarding President’s status quo is concerned he represents federation and always an icon of federation, he played his role much better than the previous presidents of Pakistan. The history is replete with the palace intrigues, in which presidents played a role of partisan and toppled several governments; comparing the role of Zardari he always united the country through politics of reconciliation. He never subverted the federation nor did he undermine any political party, rather than he negotiated with all the political parties on equal footing to strengthen Pakistan.

Such biased and unfair decisions and verdicts aim to destabilize Pakistan and nascent democracy inside Pakistan but the PPP and its erudite leadership will not allow anyone to do so.