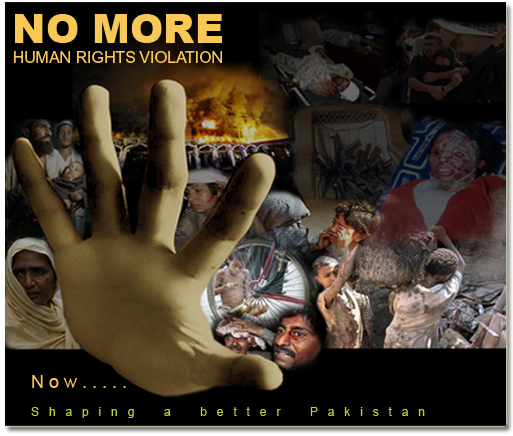 Unprecedented flooding, extrajudicial killings, terrorism and attacks on journalists in Pakistan are summarised in Amnesty International’s 2011 report ‘The State of the World’s Human Rights’, which was released on Friday.

The report paints a grim picture of the state of human rights and security situation in Pakistan during 2010, with numerous cases of enforced disappearances, extrajudicial killings, torture, mob violence and terrorist attacks as well as 19 attacks on journalists. It highlights discrimination against religious minorities, and holds the state responsible for failing to “prevent and prosecute discrimination, harassment and violence against religious minorities, and, increasingly, moderate Sunnis.”

Amnesty International declares that Pakistan “again suffered through a cataclysmic year”. The floods compounded the worsening situation in conflict zones, as “the acute humanitarian crisis added to the existing misery of those already displaced by the conflict”.
Similar assessments have been made in reports released recently, including the Internal Displacement Monitoring Centre’s report on the state of internally displaced persons worldwide and the UK Foreign and Commonwealth Office’s report on human rights and democracy in 2010.

In its assessment of military operations in the Federally Administered Tribal Areas, Amnesty International states that “despite success on the battlefield, military and civilian authorities failed to address the underlying causes of the conflict” and nothing was done in terms of development or rebuilding infrastructure or providing adequate humanitarian relief. Additionally, humanitarian organisations and independent monitors were barred from effectively operating in conflict areas.

Cases of enforced disappearances and extrajudicial killings in Balochistan increased in 2010. The report notes that the discovery of bullet-riddled bodies of missing Baloch activists have “only added to the climate of fear and the Baloch people’s grievances of misgovernance and marginalisation. But because reporting from these conflict-affected areas remained patchy and scarce, it provided only an inkling of the enormous human suffering in the province”.

The report highlights the few positive elements of the year such as the election of noted lawyer and activist Asma Jahangir as president of the Supreme Court Bar Association and the passage of the 18th Amendment. But these are overshadowed by the abovementioned events of death and destruction and the general breakdown of law and order, evidenced by incidents of mob violence – such as the infamous Sialkot case, violence against women and girls, torture by police officers and arbitrary arrests and detentions by security officials.

In the regional context, India-Pakistan relations were “fragile” in 2010, “following Pakistan’s ongoing failure to adequately address the November 2008 Mumbai attacks” as well as the increase in protests in Indian Kashmir, according to the report.

The things pointed out in the report are really appreciable. Assassination of minorities have been a fun for extremists.Burning of Churches and Holy Bible was also not taken into any serious consideration. Not only Christian are being suffered but all minorities. We as a nation have become paralysed and we Pakistani people are mentally disable because since Pakistan has cam into being till now what have been done towards democracy. Pakistan came into being with the slogan DEMOCRATIC REPUBLIC OF PAKISTAN. What is happening in Pakistan all is due to lack of good leadership. Pakistan is like a person who is factory of diseases who is lying on the brim of Death and doesn’t know when angel of death will come and take him. I will finish here by saying that Pakistan can never get out of all kinds of violence unless it would have good leadership because we people are mentally habitual of slavery and the region of Pakistan have been still in slavery. verbally it is free but in reality Pakistan is still slave.
God bless
Nathaniel

I agree with the opinion expressed by Saba Imtiaz. Human right abuse is the result of multifactorial factors in the pathaphysiology of this disease. Our country is governed by politicians who are either feudals, tribals or from institution lacking civil liberies elements and thus practice their ills withot fear of moral conviction.
The second biggest institution is the Army and the intelligence which violates all aspects of civil rights to justify their power and they are supported by the religous bigots to unleash the crime of killing people in the name of suicide bombing and utilizing the infamous blasphemy law to kill or victimize the minority.
It is true that the Human Rights Advocate, Asma Jilani has been elected to voice her concern as a lawyer, she has to speak against the troiks of feudal-army-religous extremist to reduce human right abuses. If this troika is weakened-institution of civil liberities will strengthen and human right abuses will go down.

Only OBL had human rights in Pakistan. People are still upset and in denial about his death. Nobody else, especially women and minorities do not have any rights in Pakistan. I am sorry to say but nothing would change there for better. It is just the beginning of Islamists takeover, helped and protected by the army/ISI.
After Zia planted mullahs in the army and its training, Pakistan of Jinnah has vanished.