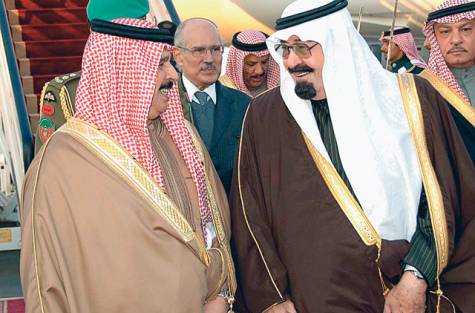 Why no outcry over these torturing tyrants?

Christopher Hill, a former US secretary of state for east Asia who was ambassador to Iraq – and usually a very obedient and un-eloquent American diplomat – wrote the other day that “the notion that a dictator can claim the sovereign right to abuse his people has become unacceptable”.

Unless, of course – and Mr Hill did not mention this – you happen to live in Bahrain. On this tiny island, a Sunni monarchy, the al-Khalifas, rule a majority Shia population and have responded to democratic protests with death sentences, mass arrests, the imprisonment of doctors for letting patients die after protests and an “invitation” to Saudi forces to enter the country. They have also destroyed dozens of Shia mosques with all the thoroughness of a 9/11 pilot. But then, let’s remember that most of the 9/11 killers were indeed Saudis.

And what do we get for it? Silence. Silence in the US media, largely silence in the European press, silence from our own beloved CamerClegg and of course from the White House. And – shame of shame – silence from the Arabs who know where their bread is buttered. That means, of course, also silence from al-Jazeera. I often appear on their otherwise excellent Arabic and English editions, but their failure to mention Bahrain is shameful, a dollop of shit in the dignity that they have brought to reporting in the Middle East. The Emir of Qatar – I know him and like him very much – does not need to belittle his television empire in this way.

CamerClegg is silent, of course, because Bahrain is one of our “friends” in the Gulf, an eager arms buyer, home to thousands of Brit expatriates who – during the mini-revolution by Bahrain’s Shia – spent their time writing vicious letters to the local pro-Khalifa press denouncing Western journalists. And as for the demonstrators, I recall a young Shia woman telling me that if only the Crown Prince would come to the Pearl Roundabout and talk with the protesters, they would carry him on their shoulders around the square. I believed her. But he didn’t come. Instead, he destroyed their mosques and claimed the protests were an Iranian plot – which was never the case – and destroyed the statue of the pearl at the roundabout, thus deforming the very history of his own country.

Obama, needless to say, has his own reasons for silence. Bahrain hosts the US Fifth Fleet and the Americans don’t want to be shoved out of their happy little port (albeit that they could up-sticks and move to the UAE or Qatar anytime they wish) and want to defend Bahrain from mythical Iranian aggression. So you won’t find La Clinton, so keen to abuse the Assad family, saying anything bad about the al-Khalifas. Why on earth not? Are we all in debt to the Gulf Arabs? They are honourable people and understand when criticism is said with good faith. But no, we are silent. Even when Bahraini students in Britain are deprived of their grants because they protested outside their London embassy, we are silent. CamerClegg, shame on you.

Bahrain has never had a reputation as a “friend” of the West, albeit that is how it likes to be portrayed. More than 20 years ago, anyone protesting the royal family’s dominance risked being tortured in the security police headquarters. The head of it was a former British police Special Branch officer whose senior torturer was a pernicious major in the Jordanian army. When I published their names, I was rewarded with a cartoon in the government newspaper Al-Khaleej which pictured me as a rabid dog. Rabid dogs, of course, have to be exterminated. It was not a joke. It was a threat.

The al-Khalifas have no problems with the opposition newspaper, Al-Wasat, however. They arrested one of its founders, Karim Fakhrawi, on 5 April. He died in police custody a week later. Ten days later, they arrested the paper’s columnist, Haidar Mohamed al-Naimi. He has not been seen since. Again, silence from CamerClegg, Obama, La Clinton and the rest. The arrest and charging of Shia Muslim doctors for letting their patients die – the patients having been shot by the “security forces”, of course – is even more vile. I was in the hospital when these patients were brought in. The doctors’ reaction was horror mixed with fear – they had simply never seen such close-range gunshot wounds before. Now they have been arrested, doctors and patients taken from their hospital beds. If this was happening in Damascus, Homs or Hama or Aleppo, the voices of CamerClegg, and Obama and La Clinton would be ringing in our ears. But no. Silence. Four men have been sentenced to death for killing two Bahraini policemen. It was a closed military court. Their “confessions” were aired on television, Soviet-style. No word from CamerClegg or Obama or La Clinton.

What is this nonsense? Well, I will tell you. It has nothing to do with the Bahrainis or the al-Khalifas. It is all about our fear of Saudi Arabia. Which also means it is about oil. It is about our absolute refusal to remember that 9/11 was committed largely by Saudis. It is about our refusal to remember that Saudi Arabia supported the Taliban, that Bin Laden was a Saudi, that the most cruel version of Islam comes from Saudi Arabia, the land of head-choppers and hand-cutters. It is about a conversation I had with a Bahraini official – a good and decent and honest man – in which I asked him why the Bahraini prime minister could not be elected by a majority Shia population. “The Saudis would never permit it,” he said. Yes, our other friends. The Saudis.

Inside Story: Bahrain – the black hole of Arab uprisings?
http://youtu.be/Uee3DuzyRnU

Click here to post a comment
Press: In chains of another kind -by Waseem Altaf
Punjab: Christian student nurse forced to convert to marry Muslim man