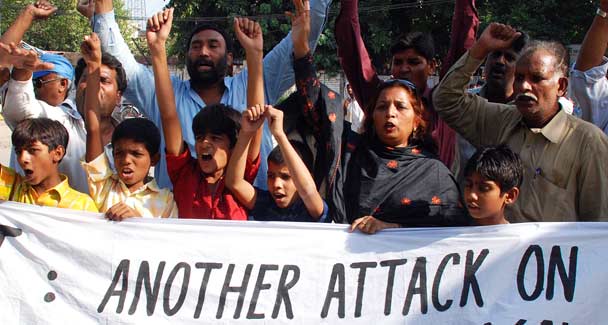 Lahore – A 24-year Christian woman from southern Punjab was abducted by a Muslim man who, after forcing her to convert to Islam, also forced her to marry him. Although her family filed a formal report of kidnapping, the police did not act immediately, either to stop the abduction or to arrest the culprits. Likewise, her family has gone to court to get her released to no avail; the young student nurse remains in fact in the hands of her kidnappers. This, according to a local priest, is part of an “alarming” trend in anti-Christian violence. He is, to put it mildly, “disappointed by the behaviour of local authorities”. A human rights activist confirms that the region of Pakistan where the woman lives is a “safe haven for extremists” who perpetrate abuses and kidnappings “with total impunity”.

Farah Hatim, 24, from Rahim Yar Khan, a town in southern Punjab, was training to be a nurse at the Sheikh Zaid Medical College, working in the orthopaedic ward. Last Sunday, she was kidnapped as she crossed Jinnah Park, which is located near the college where she worked.

Her kidnapper is Zeehan Iliyas, a young Muslim man working as an office boy at a local branch of the United Bank Ltd. With the help his brothers Imram and Gulfam, he abducted the young woman, ordering her to convert to Islam and marry him.

“This [Muslim] family has a history of kidnapping young Christian women and forcing them to convert,” said Bilquees Marriam, Farah’s mother, adding that they act with impunity because they are backed by a local Member of the National Assembly, who belongs to the ruling party.

The woman and her other six children went to the police to file the abduction report, but the duty officer refused to take a First Information Report (FIR).

The day after the kidnapping, the local Christian community rallied around the kidnapped woman’s family and began protesting against the violence against her and the complicity of local law enforcement. Initially, police tried to disperse the crowd but following the intervention of the superintendent of police, a FIR application was accepted and an investigation was launched.

However, the delay gave Farah Hatim’s kidnappers time to take the young woman to a district court under duress so that she could state that she had converted to Islam and would marry Zeehan Iliyas.

The judge, who failed to cross-examine the woman, especially with regards to the wounds to her body, simply accepted her statement as “valid”.

Zahid Hussain, the Hatim family lawyer, slammed the gross violation of the Farah’s rights and the faulty legal procedures. He said that when “someone makes a statement before a court, the judge must question the applicant alone in order to determine whether his or her decision was made under duress or by consent. In this case, the courtroom was full of people, including those who actively took part in her abduction and assault. The judge also ignored her wounds. [. . .] All this shows that she was forced to sign the statement”.

Last Tuesday, Farah’s family filed a second complaint, which the police has so far failed to pursue.

“Southern Punjab is a safe haven for extremists,” said Rizwan Paul, head of the human rights organisation ‘Life for All’. Indeed, local authorities and police are more interested in “protecting offenders” than in justice.

“We have highlighted several cases of forced conversions and brought it to the attention of the authorities, but they have turned a deaf ear to our complaints,” he said.

“It is a sad incident,” said Fr Sohail John, parish priest at Rahim Yar Khan. “We strongly condemn the kidnapping and the forced conversion. We are disappointed over the response of the local authorities. It is alarming that [. . .] the Punjab government has failed to protect the minorities” and is instead “protecting the culprit”.

Click here to post a comment
Why no outcry on torturing tyrants of Bahrain and Saudi Arabia? – by Robert Fisk
Dawood Ibrahim son’s wedding in Pakistan