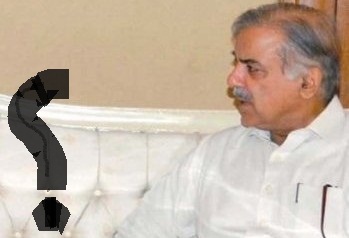 While PPP and PML-Q leadership were busy in a meeting to finalising the power sharing formula, all the eyes as always were on the Presidential palace. Enthusiastic reporters were officiously covering the event and TV actors hosting the entertainment talk shows focused on political issues were banging on aspects and implications of the new alliance, Far far from the camera eyes, another meeting was going on between the anti-establishment(as they were called by Najam Sethi) PML-N, their defacto head Chauhdry Nisar accompanied by CM Shahbaz Sharif with a powerful personality in Rawalpindi. Worried on the recent political developments they have rushed toward this personality without protocol. Amazingly Chauhdry Nisar, the anti-establishment icon and harsh critic of Army and ISI role in politics is leading this significant and symbolic meeting.

Guess who is this important personality?

Here am posting a news report about the meeting between PPP and PML-Q leadership having details of the power sharing agreement. 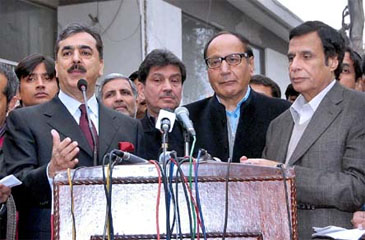 ISLAMABAD:Under a secret clause of an imminent power-sharing deal between the ruling Pakistan Peoples Party (PPP) and the Pakistan Muslim League-Quaid (PML-Q), Prime Minister Yousaf Raza Gilani will have to forfeit some of the control he has exercised so far over the federal cabinet.

An understanding to this effect was reached recently at the presidency.

In a largely reduced role, as envisaged by the proposed agreement, Gilani would not be able to supervise or meddle in the affairs of 10 proposed ministers from the PML-Q. Instead, those ministers would be accountable to their own party head Chaudhry Pervaiz Elahi, who would sit in the prime minister’s secretariat on a separate floor along with his party ministers — conjuring the image of a parallel administration.

The move — which will give the prime minister control over only a selected numbers of ministers — is expected to anger Gilani, who is still in the dark about the power-sharing deal cut at the presidency.

After the passage of the 18th amendment Gilani was convinced that he was the most powerful prime minister — even if that was only on paper.

On Sunday, the prime minister will be part of the dialogue for the first time when senior leaders of the two parties will hold a round of talks to work out the modalities of the power-sharing formula.

The two sides will take up specific subjects of a 19-point agenda that the PML-Q had put forward earlier. The agenda is likely to cover detailed roles in delimitation of constituencies, provincial governments, local government, Senate and the next general elections, as well as the formation of new provinces.

Sources within the two parties concede that only the broad parameters had been discussed so far and that details had not been finalised.

Sources have also confirmed that the decision to allow Pervaiz Elahi to run a parallel government at the federal level alongside Gilani was taken after lengthy negotiations between the PPP and the PML-Q. All PML-Q ministers are to report directly to Pervaiz Elahi, who is likely to be named deputy PM.

A separate camp office of the prime minister will be opened at the Lahore state guest house where Pervaiz Elahi would sit in an apparent challenge to Punjab CM Shahbaz Sharif.

Sources said that the Chaudhrys of Gujrat had also demanded the ministry of interior, realising that it could not flout his powers without assuming control over the police and other agencies. Upon learning of these developments, Interior Minister Rehman Malik rushed over to Chaudhry Shujaat Hussain and Pervaiz Elahi, whom he has known since the early 1980s when he was considered close to the assassinated Chaudhry Zahoor Elahi.

Sources also said that a decision had been taken to remove Punjab Governor Sardar Latif Khosa and replace him with a joint nominee of the PPP and the PML-Q.

According to sources, federal lawmaker Awais Leghari and Senator Jamal Leghari are lobbying on behalf of their elder Maqsood Leghari to take over as Punjab governor. Senator Mushahid Hussain is said to have agreed to back this new alliance on the condition that his brother Mohid Hussain, who lives in the United States, is made the country’s permanent representative at the UN in place of Hussain Haroon.

Meanwhile, sources said the PML-Q had decided that its provincial party chiefs Pervaiz Elahi (Punjab), Amir Muqam (Khyber-Pakhtunkhwa), Jam Yousuf (Balochistan) and Ghous Bux Mehar (Sindh) would take oath of federal ministers. Faisal Saleh Hayat would be made a federal minister on the grounds that he was the parliamentary leader of the party in the NA. Among those who are likely take oath are Raza Hayat Hiraj, Sheikh Waqas Akram, Noman Ejaz Langrial, Riaz Hussain Pirzada, Shahnaz Sheikh and others. Bhadur Khan Seehar will also become a cabinet member.

Meanwhile, efforts are under way to rope in the Muttahida Qaumi Movement and Jamiat Ulema e Islam the two former allies of ruling PPP who parted ways with the central government earlier this year.(The Express Tribune,)

Hope media will soon issue the details of another meeting held at the same night in Rawalpindi.