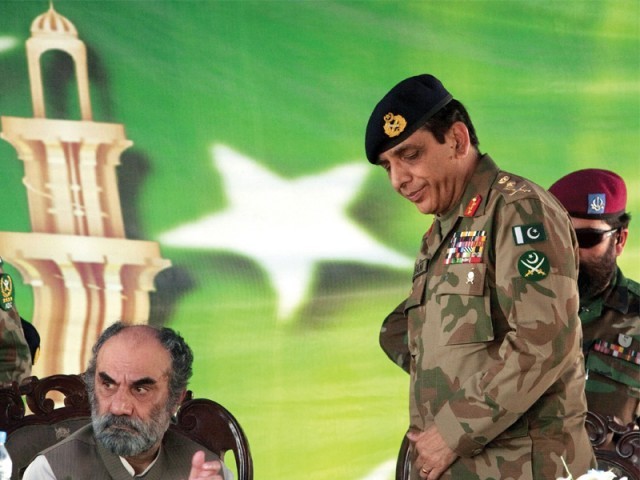 While the Chief of Army Staff General Parvez Ashfaq Kayani’s announcement to replace PA soldiers with the paramilitary Frontier Corps (FC) in Balochistan’s gas-rich town of Sui indicates a significant policy change on part of the military, it would be unwise to say that this is without precedent.

In the last eight years, the federal government has taken such steps to appease the Baloch but despite their goodwill, they did not translate into practical changes on the ground.

The committee headed by Senator Wasim Sajjad was tasked with compiling Balochistan’s concerns on constitutional issues such as provincial autonomy and decided on how much control the province should exercise on its natural resources. The second committee headed by Senator Mushahid Hussain Syed was responsible for addressing the Baloch’s reservations on military cantonment and mega projects such as the Gwadar Port. Unfortunately, the recommendations of the parliamentary committees were never implemented.

The Pakistan Peoples Party made a similar comprehensive move in November 2009 with the unveiling of the Aghaz-e-Haqooq-e-Balochistan Package in a joint session of the parliament.   Two years on, no progress has been made in calming the Baloch sentiments of deprivation.  The reasons are obvious by analysing the semantics only.

Firstly, there is a grand communication gap between the Baloch, the army and the federal government. All the parties involved in the conflict do not properly understand terms used from each other’s lexicons. The ambiguity of terminology has added to the issue at hand.  For example, the army and the Baloch differently interpret the term “military operation”.

From Pakistan Army’s point of view, a “military operation” takes places when tanks and helicopters as well as weaponry are employed to accomplish a goal.

On the other hand, the Baloch equate extra-judicial killings, disappearances, and even the checking at check-posts with “operation”.  So every time the army chief or the federal Interior Minister Rehman Malik decline any “ongoing operations” in Balochistan, the Baloch instantly cite the killing or “disappearance” of some young political workers and activists. The knee-jerk reaction by the Baloch to every government statement is: “So many Baloch were killed and many are missing, how can they deny that there is a military operation?”

In a similar vein, there is a difference in the interpretation of the term “development”.  For the government, development projects means the work at Chamalong Coal mines or the establishment of cadet colleges and cantonments. On the other hand, the Baloch are sceptical of these measures and consider it a “usurpation” of Baloch resources under the umbrella of “development.”

The skepticism is not limited to semantics either. The Baloch see the army’s decision to recruit youth from Balochistan to stem the protest against “disappearances.”

The political establishment would be well advised to not rely on rhetoric and realise that a change in Balochistan can only come with a holistic approach, which means a lasting and sensible political solution.

General Kayani’s fresh announcement about pulling out the army in Sui is either because of his ignorance about the Baloch point of view or a deliberate attempt to block the way for a political settlement to the conflict. In fact, to them, the term “poj” (similar to Fauj in Urdu) includes both the army and the federal paramilitary force, the FC.

Today, the Baloch have more complaints against the FC than the army itself or the federal government. People see the FC, whose composition includes barely 10 per cent of local Baloch, as a troublemaker rather than a solution to the ragging conflict.  Balochistan Chief Minister Nawab Mohammad Aslam Raisani blames the FC for allegedly running a “parallel government” within the province.  Ministers in his cabinet accuse the FC of sabotaging every attempt to politically reconcile with the enraged Baloch leaders. The nationalists accuse it of whisking away political activists during broad daylight from public places like universities and markets.  In one such incident, hundreds of people saw the FC personnel whisking away three Baloch nationalist leaders from Turbat district two years ago. Within a couple of days, all three leaders were killed and their bodies were thrown in an abandoned area.

Thus, when General Kayani says he is going to deploy FC in Sui, it means he, in the Baloch interpretation, approves of FC’s extra-constitutional actions such as the killing of political workers, arrests and enforced disappearances.

That said, General Kayani should realise that FC is no longer the only issue in Balochistan. As the head of the country’s armed forces, he can take some of the following proposed measures as confidence building measures (CBMs), among several others, to prevent Balochistan from falling apart.  First, military and paramilitary presence has to be reduced in the province. FC-controlled check posts should be removed from the heart of the district headquarters as well as the alleged underground torture cells be disbanded. 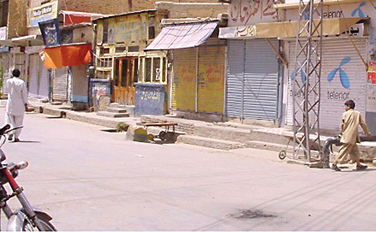 Second, only the Supreme Court should have authority to decide the fate of the missing persons. Intelligence agencies must cooperate with the Supreme Court of Pakistan and an independent investigation be conducted by the concerned parties.

Moreover, the two newly formed groups, the Baloch Musla Defai Tanzeem and Sipa-e-Shudha-e-Balochistan, which have publicly accepted responsibility for the killing of around 120 missing Baloch persons, should be exposed and brought to justice. Allegations by the Baloch of these having links with the country’s security establishment should be investigated.

It must be underscored that the army at the federal level and the Frontier Corps (FC) at the provincial level should demonstrate respect and have faith in the policies of the elected governments. They should be offered an unconditional assurance of a non-interference policy for a peaceful and political settlement of the Balochistan imbroglio.