Where President Zardari said to Americans he wanted the big fish *. He was right on money.

Given the option between Iraq/Afghanistan and South Korea/Israel, its not surprising, that President considers latter less onerous options.

On the 2nd May, at 1 am local time an operation was conducted by the US army that killed the FBI’s most wanted man, on PAKISTANI SOIL. He was a ‘stone throw away; from a Kakul. The very fact that he was found in Pakistan makes people like Hameed Gul, Imran Khan and all liars – but we knew that.
Fact that he was so close to our Army training school shows how blatantly fearless he was about his place. It was a fortress with walls and barbed wires, a huge mansion in which he lived a life of luxury. NEAR OUR ARMY BASE.
This is a worrying thought. It means either our Agencies are incompetent or complacent. Neither bode well for us. Amount of money we spend on them, they have proven to be highly bad value for money.

In any case, Zardari’s decisive action to say, kill them all, shows at least clarity of thought. Kiyani and others were literally told about these operations and 3000 CIA men and they begrudgingly accepted. comparing the two men with so many decisions to make, it is clear who has a clear sight and resolve to solve the problem. Americans understand this which is why they reportedly informed only the President of the action and why they only thanked him for his support.

Yes detractors would call him a baby killer, for allowing actual baby killers to be killed. But its a tough decision and he, in my view, took the right call.
What this operation also showed how swift operations can AVOID drone attacks. Be they done by US or Pakistani army. Attacks like so can leave little collateral, be quick and clean. It took 45 minutes and we have been rid of an evil man.

If you want rule of law, then yes, ask your army why isn’t it committing such operations? why are they not brining in evidence that can prosecute terrorists in courts? Why aren’t our courts convicting these murderers?

I for one truly believe in fair trial, but there are a reason why constitutions allow emergency provisions. While many of commentators would disagree with me, I think what we have is a war on our hand. A war to protect a right to debate, right to think, right of equal right to our citizens – that are so in danger is the wave of radicalisation wins through gun and insidious propaganda.

In the circumstances, a man has to make a choice, even as ruthless as allowing a collateral damage. President Zardari has made that, call him what you will – 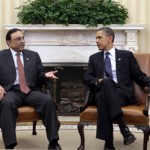