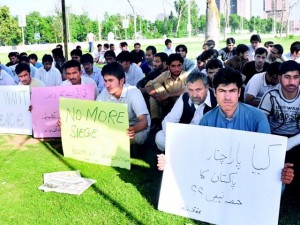 It is utter shame how Prime Minister Gilani and Rehman Malik have been behaving like a ‘Devil’s Advocate’.

More than two hundred young men from Parachinar have been camping outside the National Press Club in Islamabad for the past three days. They have been refusing to eat.

They want to know if the government really cannot open and secure the Parachinar-Thal-Peshawar Road closed for the last four years?

“Is Parachinar not part of Pakistan,” they ask.

Parachinar has a population of 0.5 million people and is the headquarters of Upper Kurram. According to the protesters, the city is being held hostage by a “handful” of Taliban, who could easily be eliminated if the establishment had the “will” to do so.

The youth vowed to continue their hunger strike until the government did something about their plight. The camp swelled up after the people of Upper Kurram on Friday received badly mutilated and burnt bodies of eight of the 41 people taken hostages by the Taliban on March 25 this year.

These people were taken hostage by the Taliban in violation of a peace agreement while they were travelling on Thal-Parachinar-Peshawar Road. The remaining 33 people are still being held captive by the Taliban.

“It was not the first violation of the peace accord by the Taliban. They have so far killed hundreds of Shiite people from Upper Kurram on the Thal Road,” said a young man in the camp.

Many of those protesting thought the government was not serious in its fight against the militants. “The establishment wants to launch these Taliban into Afghanistan at some point in time in future,” said an infuriated young boy.

He said there was only a pocket, a kilometre or so long, where the miscreants were present and were blocking the road and denying people in Upper Kurram access to Peshawar and the rest of the country.

Before the closure of Pak-Afghan border for security reasons in 2008, people of Upper Kurram were using the Afghanistan route to access Peshawar. But now they do not even have access to basic necessities of life.

“We ask why the government can not eliminate Taliban from our area if they could eliminate them from Malakand Agency and other tribal regions?” said Iftikhar Hussain, a student.

He said a sectarian divide was being deliberately created to launch people of two halves of Kurram Agency against each other. He said Taliban controlled Lower Kurram where the people had welcomed them with open arms.

But people in Upper Kurram were resisting them.

Hussain said, “We do not want to give Taliban access to our houses. We do not allow them to marry our women. And we do not want to become targets of drone attacks because of Taliban presence in our area.”