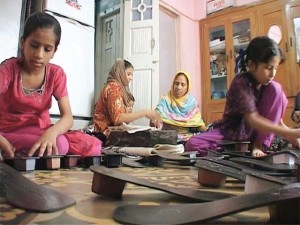 It is middle and upper classes whose women stay at home in general. In urban centres, majority of women from lower (and lower middle) classes are working so as women from rural areas as farmers (who work on wages), but they are classified in ‘informal sector’ along with their male counterparts, and hence not counted as labour, and as such no legal rights for them and hence a very limited (acknowledgeable) role in economy. Women are very actively working in various sectors including (but not limited to) agriculture, live stock, fisheries, small industries and home based labour, cottage industries, house hold labour etc. What is distinctive as mentioned earlier is that most of these sectors are not classified as formal labour sectors where labour laws apply and for same reason role of women in economy is mostly not appear in records. Another consequence of this trend is lack of education and health facilities for women.
Because of taboos in society, women mostly do not have ownership of productive means and not acknowledged as entrepreneurs, they mostly cannot control their properties and businesses (mostly inherited); and women are not provided equal opportunities of employment. They are not approved to take part in politics, not provided opportunities to participate on a political platform; this is evident from membership statistics of women wings of most political parties.
It is mostly not realized but women in lower classes are more active economically and hence socially than their counter parts in middle class. But it does not mean that they are not discriminated against because overall behaviour towards women is biased and based on discrimination; hence women in our lower classes are to fight severe battles of survival, without them working their families cannot survive, it is the economic constraint on them. When they come out to work, they have to face two fold miseries; taboos in society, discrimination and limited opportunities. It goes to their credit and honour that they survive in these circumstances and provide for their families. And this is the real distinction between them and their folks in developed countries; here they are a distinct possibility, unacknowledged, insecure and unprotected.
This misunderstanding that women in Pakistan are not an active work force is due the fact that our media and mass communication is usually circulating around the middle and upper middle class. We do not have an honest wider representation of our underprivileged. Majority of women folk in Pakistan are no queens, they are fighting for survival of themselves and their families. What is needed is to appreciate their role and provide them with equal opportunities, improve our labour laws and restrict possibilities of exploitation of our labour force (both men and women), but this perhaps is another debate.