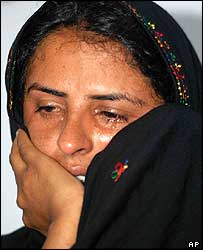 We as a real civil society are ashamed of what has happened to you and can’t really understand your agony that you have gone through or  have to go through in future. My salute to you and all other people who honestly stood with you and prayed for you. You have won the Case in Public but you have lost where it mattered the most. You were surrounded by the people who we call FAKE CIVIL SOCIETY (FCS).

They have convicted the person on the evidence that was put before the court but they couldn’t convict the people who helped him and were also part of the heinous crime. Miss Mai you were demonized by the president at that time and media used you to get to him. Why there is not even a single cry from the media at what has happened to you. Where are the flag bearers of CIVIL society, in fact they are the same animals who wore uniforms and suits at day time and turned into where wolfs at night.

The new argument that we are hearing from media in such cases where culprits get released among the jungle of people is that the “prosecution was weak“. The terrorist who were released by the same jihadi militant judges in last one year have used the same lame excuse.

If many of you remember Musharraf had said after Mukhtaran Mai case that it is the easiest way to get US & Canadian visas. And also remember Iftikhar Choudhry is one of many remnants of fauji dictator that enjoy popularity amongst opposition & Media/press. It was media which highlighted the case and CJ took suo motto. Now if noticed how small was the Headline in newspapers and how the talk shows avoided the subject.

SC and the opposition take clues from the media and media is run by all powerful anchors. As in Urdu there is a saying which if translated goes like this “lick it after spitting” same goes here SC did the same. They were riding on the bandwagon of media and took suo motto and at the end it proved to be just another case.

Our media has an uncanny knack of changing tunes, the things they wrote against when Musharraf was in power are now their favorite subjects. For example one of their favorite punching bag was NAB and now see how popular NAB is. All what NAB did during Musharaf time was bad but now it is good. When Musharraf was in power they carried your cause now that Iftikhar Choudhry is in power your cause is not important anymore.
Your cause has been politicized and you will not get justice from these discredited judges. They are part of deep state who believes in Extremism and they treat rape in same as having sex willfully because that is how they interpret our religion