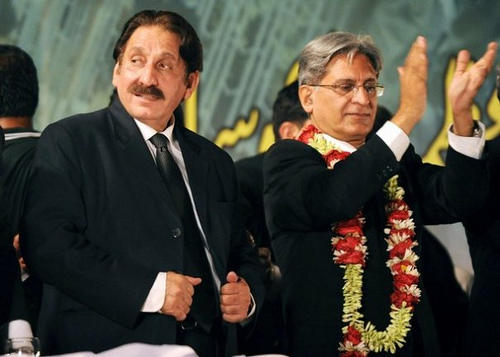 Editor’s note: The following is a rush draft of a syndicated post comprising comments and contributions of various team member of the LUBP.

Since Aitzaz Ahsan was the lawyer of Muktharan Mai and the ‘azad’ (now pro rape) judiciary can do no wrong, can a lawyer friend tell us if Aitzaz did not prepare the case properly or worse, did not raise ‘questions of law’ appropriately?

On the media clapping in the court…well, this was a poor rural woman and not an MIT educated Islamofascist terrorist like Afia Siddiqui who is their darling!

What I find interesting if there is fault with the police/prosecution in the Hajj Scam or NICL, prosecutors are changed, Directors made to resign and the whole machinery is moved. This was a suo moto case and it took them 6 years to decide. We never heard of them asking the prosecution to present the case properly. Admit it, the judiciary is right wing (lets off terrorists) and misogynist.

Our judiciary had enough evidence to hang Bhutto but too little to prosecute and convict Hafiz Saeed or the rapists of Mukhtaran Mai!

How does one present the case to prosecute a boastful public sexual assault that is justified as revenge? What was the lawyer, Aitzaz doing? Are he and the Supreme court some kind of supreme deities that it is blasphemy to call them out on this shameful display.

The Judiciary has been exposed, time and time again! Please stop being an apologist!

Also, the possibility that the stage is being set for the populist Chief Justice to step in and overturn this decision as Dilshad Chandio recently wrote in his excellent post cannot be ruled out either:

“I won’t be surprised that the CJ of the pro-rape judicial brigade forms a larger bench and reverses the judgement under media pressure. These democracy rapists cannot live without the oxygen of mainstream media.”

In the meantime, this is exactly the line of dishonest, insensitive, apologist spin that is being put to protect the crumbling reputation of a deeply biased, compromised judiciary.

A Pakistani icon who has inspired millions across the globe has been dealt a withering blow again and already our media is gearing up to call her a liar! Shame!

Interesting to observe the nature and range of apologies for the right wing misogynist judiciary here. ‘Shrill anger’ when abusing the democratic government is kosher but here we have to ‘understand the constraints ‘of the criminal justice system.

I again ask these apologists to come out of the closet and tell us where you stand? Apart from Bhutto’s murder (for which they can blame their predecessors in robes while cleansing themselves through the right wing inspired judicial movement in Karachi and Punjab) do they agree or disagree with the court removing NAB chairmen, FIA personell, IGs and DIGs for not presenting evidence appropriately in the Hajj, NICL and NRO related cases. Why should these stringent standards not apply to a poor woman? Obviously Aitzaz Ahsan has a lot to answer … Is this the ‘maa ke jaisi riasat’ he was talking about and is complicit in creating?

When the Judiciary could call a full bench in the middle of the night on the basis of rumour by its media comrades and when it fixes the price ceiling on the price of sugar, please spare us the drivel of its limitations. the contradictions have been pointed out and the judiciary has been exposed. Again.

Recently I read a post on a  Pakistani blog that blames the whole society for this verdict! We should not promote or respond to the apologist tripe that is this article. As one of our LUBP members said, the FCS tactic is to couch their rubbish with the formula of “an ounce of truth in a ton of lies”.  His FCS (Fake Civil Society) baapoos and the establishment’s “liberal-progressive” English media dons will likely use the same tactic later today.

Another scenario that was pointed out in the post by Dilshad Chandio is that the stage is being set for the Chief Justice to step in and overturn this decision. Both the Chief Justice and his Judas toady, Aitzaz Ahsan have lost even the popularity amongst FCS that was carefully crafted for them by ISI. Now both need a win. This shocking decision to free rapists could be a tactic to lay the grounds for an overturn of the verdict and give both these shady characters a popularity boost.

Our judiciary had enough evidence to hang Bhutto but too little to prosecute Hafiz Saeed or the rapists of Mukhtaran Mai! The Height of Hypocracy!

The FCS and right wing apologists offer nothing but a dishonest analysis to defend the Supreme Court of Pakistan. Just compare their chains of posts regarding pro-blasphemy PPP vs pro rape society. When President Asif Zardari pledged to appeal against the Shariat Court’s verdict to safeguard women’s rights in his speech on BB’s third death anniversary in Garhi Khuda Baksh, it was appreciated by highly emotionally charged crowd. The FCS apologists are trying to blame prosecutors, government, awaam, anyone but the ISI-backed Islamofascist judges of the Supreme Court for their misogynist, anti-secular tendencies and decisions! They are trying to suggest ‘jahil awaam’ supports rapists and will never give much attention to misery of woman!!!