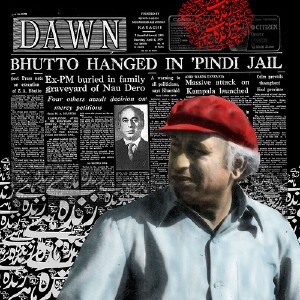 I have written few times about people who are spokesperson for ruling PPP. They should be well versed, they should be smart, they should know the PPP & its history, along with all the turmoils that it has gone thru by the hands of different people. PPP is really getting the beating on the news retail outlets. An average man doesn’t have shrewdness of analyzing all the lies that have been told by the people.

There are millions of reason why the case of Bhutto’s hanging be reopened and many have written great articles & columns for the reopening the case. I agree two hundred percent with all the reasons given for this revisit. But my few lines pertain to the comments by Iftikhar Choudhry made regarding the reference. Mr. CJ Iftikhar Mohammad Choudhry you are a discredited judge and the remnant of Musharraf dictatorship. You are a terrorist who is a threat to democracy. You have not changed a little just your Modus-Operandi has changed. You have change the garb under which you are working now. You definitely are the world’s greatest opportunist.

Mr. CJ:  you said this reference will open up all other cases of death penalty for review. Mr. CJ do not insult Bhutto by placing his murder it with just any other case of death penalty. It was the case of judicial murder as accepted by all norms of Judas-Prudence worldwide. This case was driven by the dictator’s whims not the judges sitting on the bench. The judges were biased like Moulvi Mushtaq of LHC had opined about Bhutto “being Muslim in name only”. Then where in the world has a man been hanged to death based on circumstantial evidence where as Bhutto was exonerated by Judicial Inquiry held on november11th, 1974.

I also fail to find a judge who has written in his book and in various TV interviews admitting the fact that he had voted while being under pressure. Mr. CJ you are Suo-Motto happy CJ of Pakistan. You even have taken suo-motto based on some flimsy report of the yellow journalist how come your suo-motto button is quiet on this issue.

Damn you Mr. CJ for putting Bhutto case in the same category as others. You are man of limited conscious and knowledge. Bhutto case is the only case of its kind and no other case can be affected by it. This is the only case in the country or the whole world where a sitting judge had admitted of being biased and under pressure. This alone brings Bhutto case to stand out alone. Let me explain to you Mr. CJ and your followers. Let’s bring out all the cases of death penalty and see how many were appealed in the SC and how many had split verdict last but not least in how many cases a sitting judge had admitted to the guilt of being biased, if any such case other than Bhutto exists in my opinion it should be opened for review.

Zulfiqar Ali Bhutto first elected Prime Minister of Pakistan hanged by the courts made by Military dictator General Zia Ul haq, this one line is more than enough to reopen the case and hang the people who are still alive and were the conspirators against the people’s man.

Mr. CJ you are the man if I have to bring the case of Imam Hussain & Yazeed based on all the historical facts you will side with Yazeed so how can anyone in sane mind expect you to give honour to ZAB. You are like the mufti who at the time sided with Yazeed and gave fatwas against Imam Hussain and incited people to kill him.

Click here to post a comment
They don’t have to die young! – by Shahid Nadeem
We beg you to open the Pandora Box, Mr. CJP – by Imran Qadir Butt