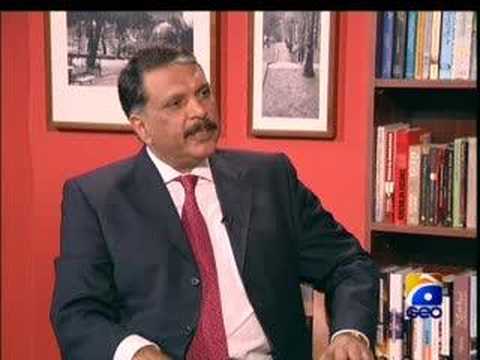 Last week, Pakistan’s Fake Civil Society (FCS) who are actually the real PPP supporters, were using Ijaz-ul-Haq (son of Pakistan’s Islamofascist military dictator General Zia-ul-Haq) to diss Babar Awan. Many of them were  inflamed that Babar Awan was representing the Government in reopening the Bhutto trail.

We the Fake Peoples Party Supporters are touched by their concern for the Pakistan Peoples Party. Ijaz-ul-Haq’s interview, as conducted by veteran, progressive, objective and sincere journalists like Ansar Abbasi and Ahmed Noorani, was widely distributed by FCS and used by them to bash Babar Awan.

In this interview, a genuine, secular-Marxist PPP leader like Ejaz ul Haq superbly deconstructs why Babar Awan is not fit to represent the Government and open a trial that would cast unnecessary aspersions on his father, General Zia-ul-Haq, another bastion of secular liberalism and a genuine PPP leader unlike Zulfikar Ali Bhutto who had usurped the party.

In this regard, Zia ul Haq had to take a tough decision just like Leghari was to take two decades later.  Both these leaders are the genuine PPP and the true patriots of Pakistan. Not many know that Zia ul Haq was a founding member of the PPP and was disheartened when ZAB led PPP government decided to recognize Bangladesh as an independent country at the Islamic Summit Conference in 1974.

This is why us FPPP feel that we have failed the party and its true leaders.  FCC should also be heartened to note that their support for Ijaz ul Haq and Ansar Abbasi against Babar Awan was validated by veteran progressive humanist, Javed Chaudhary.  However, since his article was in Urdu, which is a Fake language, it did not make its way into FCS discourse on this issue.

FPPPs like us felt that Asma Jehangir would have been a better choice but after seeing the tremendous support given to Ijaz ul Haq’s epic take on Babar Awan, we stand corrected and humbled. When they use Ijaz ul Haq to deconstruct Babar Awan, who are we to question their well intentioned stance!

We also agree with FCS that a true PPP stalwart, Chaudhary Aitzaz  should be leading this case.  After all, we all know his of his loyalty to PPP when ZAB was being “deposed”.  Throughout his career, Chaudhary Aitzaz has always sided with the Marxist establishment against the Imperial Fake PPP, whether it was 1977 or 2007.

Since 2007, Chaudhry Aitzaz has sided with his fellow caste member Chaudhary Iftikhar and the two of them have taken a brave stance against Fake PPP leaders like the late Benazir and now Zardari.  Like his FCS admirers, Chaudhry Aitzaz has been consistent in this support of the Judiciary from 1977 to 2007 and present.  Like a true progressive he has placed his support with the Lal Masjid movement; an act that would have made Faiz proud.

Unlike the Citizens for Democracy (also known as the Citizens for Martial Law because of the stance of some CFD members like Nasim Zehra in favour of the establishment), we the FPPP and our allies like the Peasants for Democracy are not worthy of being PPP.  Neither is the leadership of the current PPP which is also fake.  Starting with Zulfikar Ali Bhutto and including Benazir, Bilawal, Farhatullah Babar, Fauzia Wahab, Taj Haider, Zulfiqar Mirza and Zardari, we wish that they are all expunged from the PPP which is then handed back to the Real PPP (RPPP).

The RPPP is based on the illustrious Ghinwa-Fatima Bhutto dynasty and the Left wing party founded by Marxist leader Zia ul Haq and continued by his brave son, Ijaz ul Haq.   In particular, we the FPPP have finally come to realize the amazing but misunderstood character of Ijaz ul Haq.  Inspite of his humble financial background, this man is a true and outspoken liberal who has always espoused the cause of such anti-imperialist Marxist movements such as  Lal Masjid and Taliban. When individuals like him raise their voices against someone like Babar Awan, we have to give such a voice the respect and reverence it truly deserves.

We also feel that courageous journalists who have taken a stand against the FPPP establishment (Mosharaf Zaidi, Ansar Abbasi, Naveen Naqvi, take a bow) are also established as the real future leaders of the RPPP, possibly given the positions currently held by Farhatullah Babar and Firdous Ashiq Awan or that of the caretaker of Garhi Khuda Bux, qabristan of shuhada.

A specimen of Real PPP’ supporters at Twitter:
14 April 2011

JavedChoudhry
How People Change Their Loyalties? Babar Awan is an Example!!!… http://fb.me/xk3KGJK8

saeedshah saeed shah
by samadk
#Babar Awan, asked outside Supreme Court on 13April2011 if he had distributed sweets on the hanging of #Bhutto, replied “No comment”.

@samadk
@saeedshah @omarwaraich have to agree with you saeed. The move may become a disaster for PPP.

Rezhasan Rezaul Hasan Laskar (a foreign journalist surrounded by FCS)
am no fan of Ijazul Haq but he has some interesting stories to tell about former law minister Babar Awan. http://bit.ly/eC52Na

kaalakawaa Kala Kawa
As vile as the “#FCS” may be the #FPPP that defends Babar Awan (he of mithai distribution on ZAB’s killing fame) is 10 times worse.

ISLAMABAD: “Babar Awan was General Ziaul Haq’s energetic activist during his lifetime and even after his death. When PPP chief Zulfikar Ali Bhutto was in jail, Babar demanded hanging of Bhutto in public protests and distributed sweets in Rawalpindi courts on the day of his execution,” Ijazul Haq, the son of the third military ruler, confirmed to The News.

Babar Awan, however, declined to comment on the issue. Ijazul Haq also released to the media four pictures of a rally in Rawalpindi on Gen Zia’s anniversary in which Ijazul Haq and Babar Awan both made speeches.

Though different contemporaries of Awan used to narrate these stories and show extreme astonishment over Awan’s statements in praise of Bhutto, as during more than two and a half decades and till mid-90s, he always blasted ZAB and even abused him at times in different public rallies.

He also ran continuous protest campaigns demanding capital punishment for the revolutionary founding chairman of PPP when the latter was in jail in a murder case. But, now the relevant man, the son of Ziaul Haq and head of Zia-followers in Pakistan, has come on record and has confirmed Babar Awan’s heartiest affiliation with his father and enmity and hatred Awan always had in his heart for Bhutto. Ijazul Haq made many revelations during his exclusive interview with The News.

Ijazul Haq disclosed that Awan remained attached with him during the entire rule of his father and remained an activist against Bhutto. He said that Awan demanded public hanging of Bhutto and when ZAB was hanged, Babar was very happy and went to Rawalpindi courts where he distributed sweets among the lawyers.

He said that later he remained a sympathiser of his father. “Babar remained very active after my father’s death and used to conduct the proceedings of the anniversary of Shaheed Ziaul Haq as stage secretary,” said Ijazul Haq. He said that Babar Awan was given the honour to conduct the proceedings of the first death anniversary of his father as stage secretary on August 17, 1989.

Ijaz said that Awan’s love for his father further increased after his (Ziaul Haq) death as Babar became politically active. He said that Babar accompanied him to different processions and played ka ey role in success of Lal Kurti procession in the early 90s. Ijazul Haq disclosed that Babar Awan also invited him to his native village Matore (near Kahuta) to address a big public gathering to glorify the role of his father.

Ijaz said that Awan often used to visit the grave of his father to offer Fateha. Senior political leaders say that Babar remains with those who are in power and when they lose power and glory, he would look for the next party.

Babar Awan was repeatedly contacted for his version but he did not come on line on his cell and residence numbers. But when media persons asked Awan outside the Supreme Court building on Wednesday about distributing sweets on Bhutto’s hanging, he did not deny and simply said: ‘No comments’.

Click here to post a comment
We beg you to open the Pandora Box, Mr. CJP – by Imran Qadir Butt
Karachi’s Industrialists, and “Institutionalized” Extortion; an unbiased perspective – by Furqan Ahmed