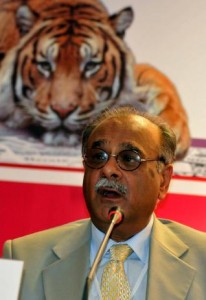 Mr. Liberal or Mr. US lackey whatever he has been known as, has often given election dates with the fall of PPP government. But now he has changed his cassette and has come up with a new line. Now in his presumptuous mind, PPP has become pro-establishment party. Well, Mr. Sethi good luck once again with your new thoughts. If PPP was pro-establishment party, it wouldn’t be getting banged by Judiciary day in and day out. And indeed, the ugly role that you played against Benazir Bhutto’s government in 1990s is really a proof that you are anti-establishment.

Source
President Asif Zardari is cosy with COAS General Ashfaq Kayani and DG-ISI Lt General Shuja Pasha. The former has been given a full three year second term and the latter has got a second one-year extension. GHQ has seized full charge of foreign policy. Does this mean that the PPP, historically an “anti-establishment” party, has now become a “pro-establishment” party?

Chaudhry Nisar Ali Khan, the leader of the PMLN opposition in parliament, has lashed out at the ISI, accusing it of degrading democracy, playing puppets and polluting polity. He says the ISI is “meddling in the political affairs of the country and going beyond legal boundaries… it is making and breaking political parties… funding specific parties to create a new political alliance”. He insists that the PMLN will not allow the army “to cross its limits”. Does this mean that the PMLN, historically a “pro-establishment” party, has now become an “anti-establishment” party?

The short answer to both questions is no, the PPP and PMLN are not unequivocally pro or anti-establishment parties; they are simply responding to the exigencies of political survival in a tilted civil-military paradigm in uncertain times.

In the beginning the PPP tried but failed to seize control of the ISI’s internal political wing. It then roped in Washington to insert some anti-military clauses in the Kerry-Lugar bill but had to retreat on that front too. Stung twice, President Zardari thought political opportunism the better part of political valour and meekly submitted to GHQ. Meanwhile, besieged by the newly independent judiciary – the second pillar of the establishment – he dug his heels in and vowed to resist its administrative encroachments with all his might.

Similarly, the PMLN, which is still smarting from the army’s misadventure in Kargil whose blame it had to shoulder, is now fuming at the ISI’s manipulation of the media and public opinion against the PMLN in the Raymond Davis case. It is also alarmed at the ISI’s attempt to prop up Imran Khan. Who else but the ISI could have arranged Imran Khan’s meetings with the two persons he is on record as hating the most, General (retd) Pervez Musharraf and the MQM’s Altaf Hussain? Who else but the ISI could be trying to mould the Tehreek-e-Insaf into an electoral party at the expense of the PMLN in Punjab? Who else but the ISI might be trying to cobble an electoral alliance of MQM, APML, TI, JI and JUI to field against the PMLN and PPP in time to come? Who else but the PPP and PMLN should know how such strings are pulled from behind the scenes by the ISI, the former for having been its victim and the latter a beneficiary at one time?

The relationship of the two mainstream parties to the judiciary is also instructive. The PPP is at the receiving end of the judges while the PMLN basks in their glory. But the truth is that if Nawaz Sharif had been in Asif Zardari’s shoes, given his track record, he would’ve been more belligerent and dogged in defying the Supreme Court.

Notwithstanding the exigencies of power politics, however, Mr Zardari’s PPP and Mr Sharif’s PMLN are inclined to shed some old identification tags. The new PPP is not a blend of hardline ideologues and opportunist pragmatists as it was in Benazir Bhutto’s time. It is choking with sub-nationalists and loyalists who think nothing of licking the boots of the military to cling to power. On the other side, Mr Sharif’s team has been shorn of perennial GHQ-evergreens like the Chaudhries of Gujrat, Mushahid Hussain, Pir Pagaro, while ISI-types like Brig Billa and Gen Hameed Gul have been banished, and outspoken advocates of civilian supremacy over the military like Pervez Rashid, Chaudhry Nisar, Saad Rafique, Tehmina Daulatana and Ahsan Iqbal unleashed to set the record straight. This has raised the alarm in GHQ and compelled the khakis to spread out their plans and begin their war games. One of their cards is Imran Khan.

Another significant factor is impinging on the developing scenario. This is the rise of an outspoken media and judiciary. Each seems determined to carve out a place for itself in the struggle for power. In the short term, both are covering each other’s flanks while jointly exhibiting anti-politician cynicism and pro-military tilts. In the longer term, however, both are likely to remain hostile to any direct military intervention. This explains why GHQ is content to work with the PPP at arms length, stay close to the judiciary without succumbing to its anti-PPP pressure, retain the support of the media on national security issues and refrain from baiting the PMLN too directly or aggressively.

But this fragile equilibrium is not likely to last beyond the year. US-Pak relations are rapidly deteriorating, tugging Pakistan’s polity and economy into the eye of a gathering storm. The PPP’s governance is crumbling. The military is weighing its domestic and foreign policy options. The SC is circling its PPP prey. The PMLN is girding its loins for an electoral heave-ho. The media is itching to spring into action, all cameras homing in. And every manner of terrorist and extremist is working overtime to create anarchy, confrontation and civil strife. It is going to be a long, hot summer.