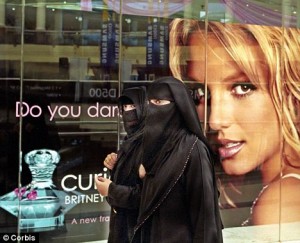 Related articles: The burqa debate: “To ban or not to ban?” – by Imaan Hazir Mazari

The burqa debate: “Burqa got a befitting French kiss” – by Marvi Sirmed

We all know that burqa does not have its roots in religion. Religion only asks women to dress modestly. Where did the burqa or veil come from then? Why do so many women in the world cover their faces?

Burqa is a mobile jail invented by men to hide the women they love. If love was involved, I would accept it. That makes the jail a little more acceptable in a twisted kind of way.

But then what kind of man will keep a person he loves in a jail?

So then, Burqa is more a jail to keep in the women they “own”.

Our men say that women should cover up, so we would not have ‘thoughts’ about them. Thoughts of harming women and thoughts of raping them. So, they want to put me in a mobile jail just so their mind would stay clean?! What a twisted logic!

But then does it really stop their ‘thoughts’? In the real world, they do not care if you are in a burqa, they will harass you. Covering my face never protected me from street harassment.

In a smaller city in Pakistan, always either my father or brother had to accompany us on the streets, or in spite of all the layers of clothes on us, men would yell taunts, follow, and even try to rub against us when were passing by. Due to this very reason, women can not leave houses alone, and always have to have a male of the house with them. Men have to protect their women from each other in Pakistan and in all muslim countries.

When we moved to a bigger city, Lahore, and got rid of the big chador, sexual harassment, believe it or not, was less. Men around us there were used to women who walked around with out covering their heads and faces. Men were more educated and their own sisters and mothers had more freedom too.

Coming to USA and experiencing the behavior of their men on the streets was an amazing experience. I can walk around wearing whatever I want. No one dares to harass me. That told me that it is not the burqa that keeps the dangerous men away, it is the mindset of a society and it is the implementation of the laws that keep women safe in any country.

My first experience of the cool breeze touching my skin on a beautiful beach in Hawaii was wonderful . Men rob women of their basic right of enjoying the nice weather by putting them in a tent called burqa. It is dark in there and it is hot in there. Just because you do not have ‘thoughts’ about me, I should be suffocated?!

Doctors consider ‘thoughts’ a God made healthy phenomenon. Acting on your thoughts without other person’s consent would put you in a jail for 10-20 years in any civilized country.

It is difficult to understand for a man of an oppressed society that in a free world men indeed learn to control their ‘thoughts’ and do not blame women for it. When it comes to France Burqa ban, the argument that ‘women should be allowed to wear whatever they want to wear and that is freedom’ does not work. Every society has to have a dress code and limitation to freedom. Your freedom ends where it starts taking mine away. Nudist frequently demand their right to walk naked on the streets. They can not be allowed to walk around completely naked just to protect the other members of the society.

Also, what right do muslims have to ask France to not ban Niqab when a western woman can not walk around freely in a muslim country wearing shorts?

You expect them to respect your culture when they come to your country, you should respect their culture too when you move to theirs.

Here is a video (interview with an Indian guy) I made a few days ago on the same topic.