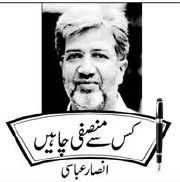 Ansar Abbasi of daily Jang newspaper provided his readers incomplete and selective translation of verses from the Holy Qur’an. Just to prove his twisted logic this self-proclaimed soldier of Islam and a ‘good Muslim’, he used the Holy Qur’an to mislead and manipulate his audience.

Please read the full English translation of the verses from the Holy Qur’an Mr. Abbasi has referred to in his column and then compare the translation Mr. Abbasi has provided in his write up published in Daily Jang on 11 April 2011. Should a leading journalist, who always sells his Islamic credentials and pretends to be a perfect Muslim, do so?

Surah Al-Baqarah
178: O you who believe! Al-Qisas (the Law of Equality in punishment) is prescribed for you in case of murder: the free for the free, the slave for the slave, and the female for the female. But if the killer is forgiven by the brother (or the relatives, etc.) of the killed against blood money, then adhering to it with fairness and payment of the blood money, to the heir should be made in fairness. This is an alleviation and a mercy from your Lord. So after this whoever transgresses the limits (i.e. kills the killer after taking the blood money), he shall have a painful torment.

25: He [Musa (Moses)] said: “O my Lord! I have power only over myself and my brother, so separate us from the people who are the Fasiqun (rebellious and disobedient to Allah)!”

33. And do not kill anyone which Allâh has forbidden, except for a just cause. And whoever is killed (intentionally with hostility and oppression and not by mistake), We have given his heir the authority [(to demand Qisâs, Law of Equality in punishment or to forgive, or to take Diya (blood money)]. But let him not exceed limits in the matter of taking life (i.e he should not kill except the killer only). Verily, he is helped (by the Islâmic law

Click here to post a comment
Benazir Bhutto, the other name of democracy – by Saria Benazir
A small press release is worth more than 10000 attacks by media, judiciary and Fake Civil Society