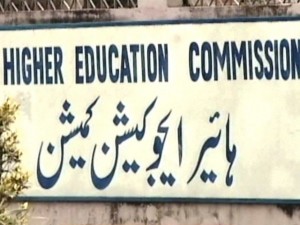 Following the decision of the Parliamentary Commission on the Implementation of the Eighteenth Amendment (PCIEA), the federal cabinet approved the devolution of five ministries to the provinces, including the ministry of education. While news anchors started steaming on their pulpits about the ‘devolution of the HEC’, one was compelled to see the issue with objectivity, setting all politics aside for a moment.

The hoopla has been constructed such that one tends to confuse higher education with the existence of the HEC. A reality check might help in removing this muddle. The HEC was born out of the sperm of a dictatorial regime and the womb of a fund-starved body, the University Grants Commission (UGC), working since 1974. Like all dictators in Pakistan, the last one too was obsessed with a centralised polity — a strong centre with little autonomy to the provinces. This has now been transformed into our collective psyche to undermine coalescing units as is evident from arguments currently given against the HEC’s devolution.

The popular arguments against the HEC’s devolution range from a concern for higher education in Pakistan, freezing of foreign aid for higher education in the absence of the HEC, halting ongoing scholarships, lack of coordination among and check on universities, etc. One has to admit the successful propaganda machine against the devolution by HEC beneficiaries and planners.

The vice chancellors (VCs) of 133 universities, as claimed by media reports, resolved against the devolution. Look a little closer and you will see and find that only 40 VCs (beneficiaries of the system) present in that particular meeting, out of 133 universities, had actually “expressed concerns over the devolution”. Even these 40 did not agree with protesting on the streets against it.

The HEC authorities used the rumour factory to propagate confusion about the issue. Rumours about the freezing of foreign aid for studying abroad were unleashed in the media, which was readily refuted by the biggest HEC donor, USAID, that made clear that their $ 250 million support still stands. The most vicious step that the HEC arbitrarily took was halting ongoing scholarships, just to spread panic and confusion among the students. Sadly, it worked. Without even slight understanding of the issue or any inclination to probe the facts, general opinion tilted in the direction the vested interest group wanted it.

The Federation of All Pakistan Universities Academic Staff Associations (FAPUASA), one of the primary and key stakeholders, however, is still silent on the issue. In fact, many members of FAPUASA in informal discussions have revealed how apt this decision would prove in steering higher education in Pakistan. A professor of economics from Government College University explained how the HEC had been promoting bureaucratic and fascist tendencies by being highly centralised and having a dictatorial authority. Many a time, the academic staff of different universities was seen complaining about the unfair and unjust practices of the HEC that undermined equal opportunities for all.

Not long ago, academic staff in Sindh and Balochistan staged demonstrations against the HEC for being extremely partial against PhD professors and students from smaller provinces. The partiality of the HEC went to the level where PhD holders in Pashto, Sindhi and Balochi were denied the same allowances as for other disciplines. One can see the same arrogance and contempt towards the smaller provinces in the devolution debate undermining the provinces’ capability to deal with higher education. Had the HEC not been that self-serving and centralised, it would have built at least some capacity among the provinces over the last eight years.

Some political parties made a bewildering U-turn by quickly jumping onto the populist position. The PCIEA does not mention any strong voice of dissent, refuting all claims of a Punjab-based political party currently insisting on the status quo. It is interesting to note that Punjab is probably the only province that had anticipated the devolution earlier than any other province, and had made its own body on higher education, which has now been working for quite some time and leaves one wondering why the HEC or Punjab government could not strengthen it for performing the HEC’s functions at the Punjab level.

Leaving aside politics and coming back to academics, an objective look at the performance of the HEC might give us some clue towards a solution or at least direction. The white elephant, as the HEC is called by leading academicians, has been notorious for softening the system for quantity while compromising the quality of the scholars on the one hand, and disrupting teaching practices in universities on the other. Instead of carrying out their primary responsibilities, i.e. teaching, the academic staff of the universities was funnelled into pursuing peripheral activities like the publication of their papers in international journals that would win them promotions and other incentives. No wonder most supervisors would sign your PhD thesis without even reading it because they have to work on more important things — their own publications.

This emphasis on published papers did not distract only the teachers from their primary responsibility, but also aspiring PhD students. The unfair condition of GRE qualification at the time of degree awarding (not at the time of PhD admission) aside, Pakistan is probably the only country where the condition of at least three publications is imposed for awarding a PhD. You better concentrate on publications instead of your own thesis, says the HEC to PhD students.

Moreover, most senior, accomplished and foreign qualified professors were not certified as PhD supervisors, for not being among ‘favourites’ or for not pleading before the HEC for it. Many renowned names like Professor Hasan-Askari Rizvi, Professor Ijaz Shafi Gilani, Professor M Islam and many others come into this category. The HEC’s obsession with increasing the number of PhD scholars while compromising their quality made the HEC suffer itself, which was seen when it announced the selection criteria for the selection of VCs against recent vacancies that asked for a foreign PhD degree, not one from the HEC.

The assertions that foreign universities would stop recognising Pakistani degrees in the absence of the HEC remain as far from reality as the HEC authorities are from egalitarianism. One wonders if Pakistan did not produce any degree holder and if the world never recognised any Pakistani degree before the HEC or, for that matter, before the UGC. This insistence on being and remaining the only centralised dictatorial body to impose self-serving terms based mostly on whims and caprices of individuals in the HEC has not taken higher education very far — yet devolution is thought incapable of doing any better. Let us learn to respect the provinces and empower them. Let us ask the HEC authorities to go into their respective provinces and steer the devolution process ahead.

All said, it remains a necessity to build an authentic body for not only coordination, but also the rating of universities. More than universities, the departments need to be rated based on their academic records and excellence. Teachers need to be encouraged for applying the best possible teaching practices rather than pursuing selfish objectives of promotions and seeking ‘tenure track’ at the expense of academic activity. Academics need to sit down with the PCIEA and inter-provincial coordination ministry so as to facilitate and advise the process of devising an effective mechanism to replace a hegemonic HEC. VCs need to stop being politicians and the media needs to sit back, think, learn and then reflect on the subject leaving aside politics and giving way to the kind of objectivity that respects academics.