With the every bleeding Sufi the dream of tolerant and democratic Pakistan is fading away and the culture that may prove to be the final antidote to the militant Islam is slipping away into the abyss. 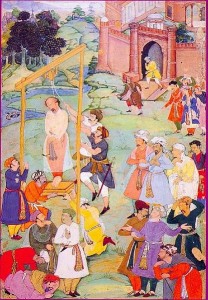 “You will see it today, tomorrow and the day after tomorrow.” He answered while smiling.

They killed him that day, burned him the next day and threw his ashes to the wind the day after that.

That’s how Farid ud Din Attar, a Persian poet and theoretician of Sufism, described the death scene of Mansur Al-Hallaj, which he deemed a heroic act. Al-Hallaj was an esoteric Persian poet and adherent of Sufism who believed in Universalist mystical introspection that the only way to reach the divine reality is beyond the forms of religious rites but within. His eccentric views were suspected as heresy by the hardliners of that time and he was publically executed on March 26, 922 CE at the orders of Abbasid Caliph Al-Muqtadir.

One finds it really perturbing to draw an analogy between the infamous execution of Al-Hallaj and recent assault on shrine culture in Pakistan but there’s no other way out but confronting the nipping reality. The whirling dervishes are no more allowed to tie bells to their feet and sway to the music, the devotees are being intimidating into staying away from the reverent places and shrines are being drowned in the blood of adherents –the bloodiest onslaught Sufi culture is facing in its thousand years old history in Subcontinent.

The shrine culture of hitherto history began to consolidate with the arriving of Sufi Saints from Central Asia, Iran and Iraq with the Muslim invaders over a thousand years ago. The arriving saints were prominently disciples the Chishtiyah, Naqsbandiyah, Qadriyah and Suhrawardiyah orders that were subsequently introduced to the local inhabitants throughout the Subcontinent. The amalgamation of the Muslim mysticism, as it had developed in the home countries of Muslim saints over the years, with the cultural and religious traits of local inhabitants led to the inception of religious as well as social culture that was hailed by not only those who preferred to proselytize to Islam but also those who chose to adhere with their native religions. Over the time, owing to its captivation, the Sufi culture engulfed the indigenous rituals, devotional music and vernacular mythology, manifested through the shrines.

Majority of the Pakistani Muslims belong to the Sunni sect, adhere to the Hanafi school of jurisprudence. The Sunnis are subdivided into the Brelvi and Deobandi schools of thought. Brelvi and Deobandi constitute the 60% and 15% of the total population of Pakistan respectively. 15% of population belongs to Shias, 5% Ahl e Hadith or Wahabi and remaining 5% is non-Muslim minorities. The problem predominately is associated with the prudish sects of Deobandi and Ahl e Hadith, constituting only 20% of population together, who accuse the majority sects of Brelvis and Shias to deviate from the actual path of religion and consider them heretics because they visit the shrines of saints, manifest strong reverence for Sufis, deem music, dance and poetry an essential part of their culture –that according to Deobandi and Ahl e Hadith sects is gross violation of Islamic doctrine.

Renowned Pakistani writer Khaled Ahmed points to the irony: “Within Sunni Islam, the Deobandis and the Barelvis are not found anywhere outside India and Pakistan. The creation of these two sects was one of the masterstrokes of the Raj in its divide-and-rule policy.” He says the Deobandi school took roots in India in 1866 as a reaction to the overthrow of Muslim rule by the British. This school believes in a literalist interpretation of Islam, and apart from Wahabis, considers all other sects as non-Muslim who must be exterminated. “That’s why they work side by side, from politics to jehad,” says Ahmed, adding that though the Barelvi school of thought is the dominant jurisprudence in Pakistan, “it is not as well politically organised as the Deobandi school.”

The first bloody attack on a Sufi shrine was a suicide assault in 2005 on Bari Imam atop a hill overlooking Islamabad. Bari Imam, like any Sufi shrine, attracts devotees across the sectarian divide. The Sufi practitioners came under heavy attack in 2010, as minority hard-line militants took responsibility for five shrine attacks that killed 64 people — a marked increased compared with 2005 to 2009, when nine attacks killed 81 people. In 2011 at least 41 people were killed, including five children and nine women, and more than 100 injured as a result of twin suicide blasts at Sakhi Sarwar shrine near D.G. Khan.

The self-proclaimed torch bearers of Political Islam i.e. Taliban mostly, if not all, adhere to Deobandi sect, who have been instrumented by the state to enforce the geo strategic agendas since the days of Afghan Jihad. Later on, the same militia was pawned in Kashmir that has now fully spun out control of the creators and wreaking havoc inside the boundaries of country to enforce their own brand of Islam. “Militancy keeps on demanding sacrifices,” Ayesha Siddiqa, a security analyst says, “So if it’s not targeting the enemy outside, it’s targeting the enemy within.”

Taking into account the ideological support of the militant outfits, the credo of malevolence against the alleged apostates, predominately, draws it support from the central/upper Punjab and urban Sindh owing to the emergence of middle-class over the last few decades, increasingly detaching from the cultural roots, that suffers from the grim identity crisis attributed to the challenges of modernization and continuous feeding of carefully crafted dogmas from the state. The art and culture that once was the emblem of the cities is dead and hatred for aesthetic is at rife incorporating the rise of intolerance and bigotry. That is totally in contrary to the views of distant observers who deem the Talbanization wrongly the expression of Pakhtun nationalism conveniently overlooking the suicide attacks on anti-Taliban militiamen in northwestern Pakistan, barbarous killings of dissenting voices against militants and annihilation of Turi tribe of Parachinar, belonging to the Shia sect, who have been taking the wrath of state and Taliban for years and still are under siege.

Click here to post a comment
Exaggerated and misunderstood: Z.A. Bhutto’s role in military operation in Balochistan
Socialism, the voice of the oppressed – By H.A. Khan