Editor’s Note:  The following note and the accompanying informative comment is a short and sharp reminder of the way in which the power elites of Pakistan, the Military-Bureaucracy Junta and their Judiciary, Media and Fake Civil Society proxies treated an elected and popular leader.  Zulfikar Ali Bhutto’s murder by Zia ul Haq and his judges is a black stain on Pakistan’s history just as the 1971 Genocide in Bangladesh and the ongoing genocide of Balochis and Shias in Pakistan.

Pakistan’s Fake Civil Society continues with its Ostrich behavior; not surprising given its rabid hatred of Zulfikar Ali Bhutto and Benazir. One will rarely see them critisizing mass murderers like Hafiz Saeed and Hakeemullah Meshud.  On the contrary, they will defend the decisions of their darling Islamofascist judges in releasing terrorists so that more carnage can be wreaked on Pakistan.  However mention ZAB or BB and they will start frothing at the mouth like murderous wolves who want to do nothing else but spill bile and tear the ZAB, BB, Zardari and Bilawal to pieces.  In their obsessive compulsive hatred of these individuals, Pakistan’s Fake Civil Society will be as dishonest in heaping the blame on ZAB as they are on treating their General, Judges and Jihadi comrades with kid gloves. 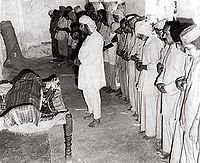 The following four couplets, by no less a personality than the venerable Faiz Ahmed Faiz, encapsulate the shameful collusion of Gen Zia’s military junta, the servile Lahore High Court/Supreme Court of Pakistan, the dumb-mute Media and the bigoted urban civil society that led to the judicial murder and dastardly execution of the one-and-only Zulfikar Ali Bhutto two hours after midnight on April 4, 1979 at District Jail, Rawalpindi.

Shafi Ul Haq: This piece of information was given to me in 1982 in Rawalpindi by the then Jail Superintendent of Rawalpindi Jail when ZAB was incarcerated there. He was an ex-major (a Pathan)who had joined the Prison service in the Seventies and had e…arlier served as the Jail Superintendent of Kot Lakhpat Jail. ZAB weighed about 175 pounds when he was shifted to Pindi Jail from Lahore. The door of his bed room was always to be kept open. Opposite to this door was the bath room door and the bathroom door had been removed by the authorities. A military guard used to sit in the varandah facing the open door way of the bedroom and the bathroom and could watch a person while he was releiving himself sitting on the toilet. It was meant to humiliate ZAB. Bhutto had stopped eating so that the need to visit the toilet was minimised. The Jail Superintendent tried his best to get this kind of torture stopped citing the jail manual as well as the Military manual with regard to treatment of prisoners. But he did not succeed as the orders had come from the top to humiliate ZAB in any manner possible. He said that by the time ZAB was taken away to the gallows, he had lost almost half his weight due to starving himself . He had become very frail but mentally very strong and defiant. By the time he ended narating this story, the man was in tears.
TagsJudicial Murder of Bhutto Judiciary Zulfikar Ali Bhutto ZAB