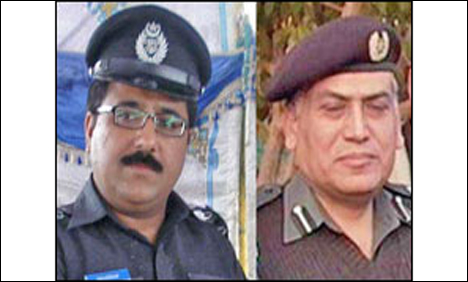 The Lahore High Court headed by its boss Chief Justice Ijaz Ahmad Chaudhry has granted bail to former Rawalpindi police chief Saud Aziz and his number two Shahzad Khurram. Both of them are the main accused in the cover-up of Benazir Bhutto’s assassination, which the overwhelming majority of Pakistanis believes was planned and executed by the notorious ISI.

It must be noted here that the special judge who has been trying Saud Aziz and Shahzad Khurram refused to set them free because of their non-cooperative behavior. Saud Aziz refused to hand over the mobile he had been using on the day of Benazir Bhutto’s assassination. Later he told the court that he had lost it. This is the very mobile on which he had been receiving orders from an ISI brigadier about Benazir. It was this very mobile on which he received orders that Benazir’s corpse must not be sent for autopsy. Besides, it was obvious that once he was out of jail, he would use his influence to have himself “proved” innocent.

But rescue was at hand. The Lahore High Court, which is notorious for being infested with Islamofascist, proto- and pro-Taliban judges since the earliest days of General Zia-ul-Haq has released these police officers on bail. It must be remembered that Z.A. Bhutto was originally sentenced to death by the Lahore High Court headed by Justice Maulvi Mushtaq who was a member of Jamaat-e-Islami. The rest of the judges were either former members of the Jamaat or blatantly Jamaat sympathizers.

The present Chief Justice of the Lahore High Court Ijaz Ahmad Chaudhry during his days as a lawyer was a high profile member of Jamaat-e-Islami. Till he was elevated to the post of judge, he had been involved in Lahore’s legal-Islamofascist politics, which saw a prolonged witch-hunt and thrashing of liberal lawyers. And now as a judge, Justice Ijaz Ahmad Chaudhry has violated all norms of justice by releasing Saud Aziz and Shahzad Khurram on bail. Proof? Here are a few proofs of the shameless dispensation of “justice”:
1. Saud Aziz was supposed to provide security to Benazir at Liaqat Bagh, but he left Liaqat Bagh leaving the entire venue insecure.
2. By leaving Liaqat Bagh, he made it easy for assassins to move freely and strike her at will.
3. Saud Aziz ensured that Benazir was driven on an insecure route. He had the secure route (on which she was supposed to drive as per security arrangements) blocked.
4. Saud Aziz produced a forged letter attributed to President Asif Ali Zardari for stopping the autopsy of Benazir.

All the above four points were raised by the public prosecutor before Justice Ijaz Chaudhry, but he ignored them and bailed Saud Aziz and his junior out.

Now history has repeated itself, and Islamofascism has struck Z.A. Bhutto one more time. Whether he is alive or dead, Bhutto the Martyr will always be an object of hatred of the Judges Lynches. The likes of Justice Ijaz Chaudhry (a Punjabi) just like his boss Justice Iftikhar Chaudhry (a fellow Punjabi) are paean to the cause of the Taliban and Saudi Arabia who wish to cleanse Pakistan of any shred of humanistic values. Add an “i” and Saud Aziz (a fellow Punjabi) becomes Saudi Aziz, the meaning of Aziz being “cherished”.