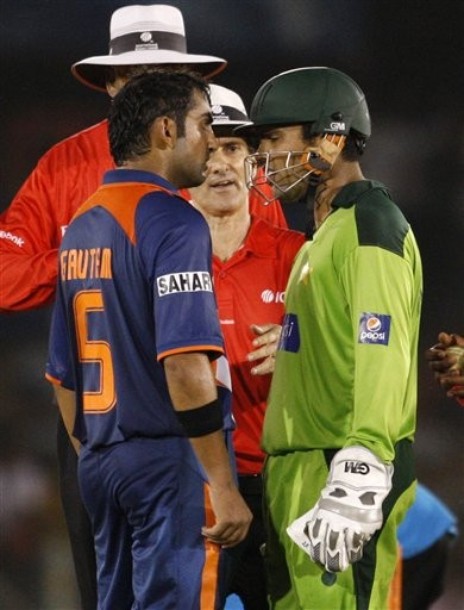 March 30th, the day when sub-continent is scheduled to stand still on the eve of the clash of Cricket Titans e.g.; India and Pakistan. Naturally the emotions of Cricket fans across the divide are spouting to the new highs. And rightly so, even a minor Indo-Pak cricket trifle creates a sizable sensation in both countries but this time the event is the most prestigious in the cricketing world, not an ordinary pool match and on top of it being played within hundred miles from the border of Pakistan.

The Internet forums have already flared up and heated discussions dominating the entire subcontinental cyber-space. ‘Team India’ and “Boom Boom Afridi eleven’ has charged follower-ship. Both teams must be under going immense pressure because of the huge expectation of their respective people. But what to do, unfortunately, there will be a result and one has to win and other has to lose. But-the fans- they are not willing to accept the defeat. This is tough!

Prime Minister of India, Manmohan Singh has invited the Pakistani head of states to watch the match. Diplomatic circles are suggesting it as a cricket-diplomacy venture. This must be an auspicious event to expect a thaw in the frozen relationships of both countries after the events of 26/11, the Mumbai attacks of 2008. Thanks to cricket, at least we would see a summit meeting, which is a good omen to the 1.2 billion people of India and Pakistan who have become hostage to the activities of the non-state actors and also the knee-jerk nature of relationship. Thanks cricket!

On the event of attack on Sri Lankan team in Lahore, I submitted that it was a time for requiem over Pakistan cricket for long time to come. No foreign team visited Pakistan since then on Pakistani land because of well found security concerns. I was intentionally trying to avoid the usage of political sausage but hard to put it aside. There has lot happened recently in Pakistan and our media sang in chorus the choir of pride, ego and sovereignty repeatedly. Fair enough, the nations have their prides, but pride without substance is tantamount to humiliation and embarrassment. Don’t we see that around our borders the whole world has converged to pay homage to the game of cricket and even some smaller countries like Sri Lanka and Bangladesh are also the proud sponsors of this majestic cricket gala but our ‘proud’ nation has failed even to bring some of its matches on its own soil, what a shame!

Sorry, politics just induces itself always, despite the restraint. On a more brighter note, the PM of Pakistan has agreed to visit India to see the match. Congress president Ms Sonia Gandhi would also be there to cheer her team. At the same time the chief minister of Punjab has announced that government is going to allot one murabba of fertile agricultural land ( around 12.5 acres ) to each player of the Pakistan team, if they beat India in the Semi Final. Well this may be a better pre-emptive move to ward off the bookies phenomenon which has already consumed some wonderful talented Pakistani cricketers last year.

Back to the game, despite my love for Pakistan cricket team, Indian seem more favorite for this game because of their deep batting line up and the kind of game they displayed against Australia. However, the momentum Pakistan team has achieved in the last two games cannot be simply over-looked. Pakistan batting is key to this match. Historically Indians are not good chaser of the target, but Pakistan

has to do extremely well and target of 290+ can guarantee them a spot in the finals but only if they show the same game as they have shown against West Indians then I am sure they can take on the East Indians too. Yuvraj Singh displayed some fine batting performance against Australia but there was no hurry for him as plenty of over were yet there and he just had to save his wicket and play the loose ball,

which he did perfectly well. But the problem lies with the squeezed-in scenario where if one has to manage an average of 6+ per over and save wicket too. No matter what is the out come of this game might be, but at the end it would be a win of game of cricket which has brought close the public of both countries.

As I was browsing the net, I came across an interesting menu made by a charged Indian cricket fan. Please see for yourself what kind of taste he is offering to his team. Personally I don’t agree with him.

Note: This example was picked to depict the deep level of emotions running among the fans. There were a lot more which couldn’t be quoted ( from both sides ) but this one was interesting. Finally I wish well to both the teams and like anybody else eagerly waiting for the match.

…there is another way of looking at India and Pakistan. No two cricket nations have so much in common. There is the language and culture. Food. A shared passion for films and music. So much so that when an Indian or Pakistani lands either in Delhi or Lahore it feels just like home. And Indian and Pakistani cricketers are friendlier with one another than they are with players from any other country. It’s a natural kinship shared among them, perhaps reinforced by the empathy. Look at this photograph of the two captains: it’s hard to picture any other pair of captains presenting a picture of such natural warmth and comradeship. (Source)