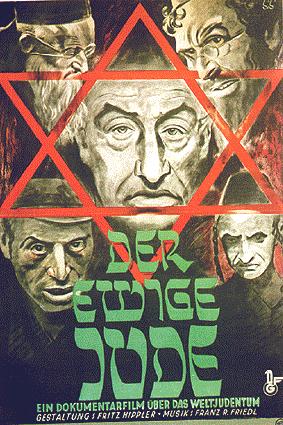 Editor’s Note:  The following article is a excellent thought provoking piece (cross-posted from 3quarksdaily)  by our valued contributer, Omar Ali.  The author raises many interesting points which are then well argued.   In its increasing Anti-Semetic attitudes atleast (as captured by this Nazi poster), Pakistan does seem to heading towards a Weimar Republic.

I recently wrote an article with this title that was triggered by a comment from a friend in Pakistan. He wrote that Pakistan felt to him like the Weimar Republic: An anarchic and poorly managed democracy with some real freedoms and an explosion of artistic creativity, but also with a dangerous fascist ideology attracting more and more adherents as people tire of economic hardship and social disorder and yearn for a savior. While the Weimar comparison was new to me, the “failed state” tag is now commonplace and many commentators have described Pakistan as either a failed state or a failing state. So which is it? Is Pakistan the Weimar republic of the day or is it a failed state?  For my initial answer, you can read the article in the News, but when that article was circulated among friends, it triggered some feedback that the blog format allows me to use as a hook for some further discussion and clarification.

Some friends disagreed with my contention that Weimar Germany was too different to be a useful comparison. Germany and Pakistan may indeed be apples and (very underdeveloped) oranges, but the point of the analogy was that the current artistic and creative ferment in Pakistan is not sustainable and just as the Weimar Republic fell to fascism (not to state collapse), Pakistan’s current anarchic spring is a prelude to fascism.

It’s a fair point, but I think the crucial difference between Pakistan and Weimar Germany that I should have highlighted is the decentralized and broken up nature of the polity, with so many competing power centers that it is very hard to imagine a relatively modern fascist takeover (which, I assume, is the danger we are being warned against).

To make this point clearer, let’s look at the power that is supposed to be the agency of incipient fascism in Pakistan; Liberals who fear a fascist takeover almost universally regard the military high command as the center of this fascist network. They may regard the Jamat e Islami, with its long history of organizing thuggish student and labor wings, its close alliance with the jihadist faction of the army, and its systematic (islamicized) fascist ideology, as the ideological center of such a takeover. But they expect the army and its intelligence agencies to be the actual executors of Pakistani fascism.  Thus, they point towards army apologists like Ahmed Qureshi and Zaid Hamid as propagandists who are preparing the ground for this supposed takeover.

But a closer look reveals a vast gulf between anarchic and incompetent reality and slickly presented “paknationalist” propaganda. The army’s “Islamist-fascist” wing has been pushed back by 10 years of American vetting of the high command that makes it hard to imagine a successful Islamist version of fascism. Of course, some leftists accept that, but believe that the threat was never from “Islamo-fascism”, but from good old fashioned fascism in the German and Italian mode, led by army officers in Western uniforms, not by the beards and their gangs. But that leads to two other problems; one is ideological, i.e. what will be the ideology of this fascist takeover? In Germany and Italy it was German and Italian nationalism, but Pakistani nationalism minus Islam is still too incoherent to be useful for this purpose (which is why the small sliver of educated westernized paknationalists who flock around army websites are so ineffectual and confused). But the critical missing component is not ideology (which can be created from very thin gruel if needed), the critical missing component is capacity; the army cannot even control its own agents in the tribal areas and South Punjab. It could not fix the electrical grid after running the system unchallenged by civilians for almost ten years. Its ministers and trouble-shooters ran a semi-functional Pakistan Railways into the ground during a similar period of direct military control. Even during martial law, they are forced to make deals with corrupt and useless politicians to keep other corrupt and useless politicians at bay. This, in short, is the gang that cannot shoot straight. They may be more capable in some areas than their detractors imagine (witness the efficient handling of the Raymond Davis families by the ISI or their ability to make nuclear bombs or advanced aircraft) but they really cannot make the trains run on time even if they do take over again. Their strong points are limited to a few areas (very good at milking their foreign patrons, for example) but their weak points are far too many and are getting worse. The threat is less serious than imagined.

A lot of feedback comes from the opposite extreme: the people who are convinced that Pakistan is on an unstoppable slide to disaster. To these people, the army is less capable than I indicated. Since they believe that all other institutions have already become junk, the army is the last wall standing between the current disorder and total state collapse, and the army is not immune to decay. Since the army has been ruling the country in one form or the other for decades, it has become politicized and discipline, morale and professional competence are deteriorating. Add to that the fact that the army is now fighting a civil war against the very elements it created and lionized for years and is doing so without any ideological framework beyond conspiracy theories about Hinjews and CIA agents. This situation is not sustainable and the army itself will crash and burn at some point, with horrific consequences. Meanwhile, the country is splitting further on ethnic and sectarian lines and is always one step away from economic chaos. No one, not the army, not the mainstream political parties, not the intelligentsia, has a coherent framework in which they can disengage from Islamist millenarian dreams and rebuild the country as a more normal country “developing” country.

Again, some of the points are fair points, but I think the doom and gloom may be exaggerated. First of all, it is very hard to break up a modern post-colonial state. It’s been done, but it is not easy and it is not the default setting. The modern world system is heavily invested in the integrity of nation states and while some states do fail in spite of that, this international consensus makes it difficult to get agreement on any rearrangement of borders. In most cases, distant powers as well as surrounding neighbors find it more convenient to find ways to compromise within existing borders. Even a spectacular failure, like the collapse of the Soviet empire, actually ends up validating already existing borders rather than creating entirely new ones. The supranational structure of the Soviet Union collapsed, but its component nations remained almost entirely within their existing borders. In this sense, Pakistan does not have 4 separate ethnically and culturally distinct units joined by weak supra-national bonds. Even an extremely unhappy component like Baluchistan is not uniformly Baloch. In fact, Balochis are probably no more than half the population of that province. Sindh contains large and very powerful Mohajir enclaves that do not easily make common cause with rural Sindh. More Pakhtoons live in Karachi than in the Pakhtoonkhwa capital of Peshawar. Economic and cultural links (especially the electronic media) unite more than they divide. If nothing else, cricket unites the nation. In addition, the reach of modern schooling and brainwashing is not to be underestimated. Even in far flung areas, many young people have grown up in a world where Pakistani nationalism is the default setting.

Economically, the country is always in dire straits, but agribusiness and textiles are powerful sectors with real potential. More advanced sectors can easily take off if law and order improves a little and irrational barriers with India are lowered a little bit.  The nation state is not as weak as it sometimes appears to be.

So much for the optimistic version. Since this is a post about Pakistan, it cannot end without some pessimism. The most dangerous element in Pakistan today is not the Islamist fanatics. It is the rise of China. Not because the rise of China threatens Pakistan or because Chinese hyper-capitalism or cheap Chinese products threaten our industry or our social peace or any such thing, but because it may inflate the egos of the military high command to the point that they lose contact with reality and try a high jump for which we are not yet ready (and may never be ready). It’s not that the high jump will get anywhere, but that the attempt may lead us into more trouble than we can handle.

I say this because GHQ, for all its pragmatic pretensions, has been known to overestimate their skill and underestimate their opponents.  If China was not truly a rising power, and if Pakistan did not have some real assets and advantages, we might have been safer in the long run. But since there is an element of truth in the paknationalists notions about China and the changing global balance of power, they may lose their balance.  All I am saying is GHQ is prone to flying off on a self-generated hot air pocket even when the situation does not encourage such optimism. When the situation actually has some positive aspects, there may be no restraining them. But, I remain an optimist. I think our own weaknesses may protect us from the fate of a much stronger and more capable country (Germany in 1940)

Click here to post a comment
Are we building abusive Pakistan? – by Ahsan Abbas Shah
1000 year old Hindu temple in Pak in desperate need of upkeep