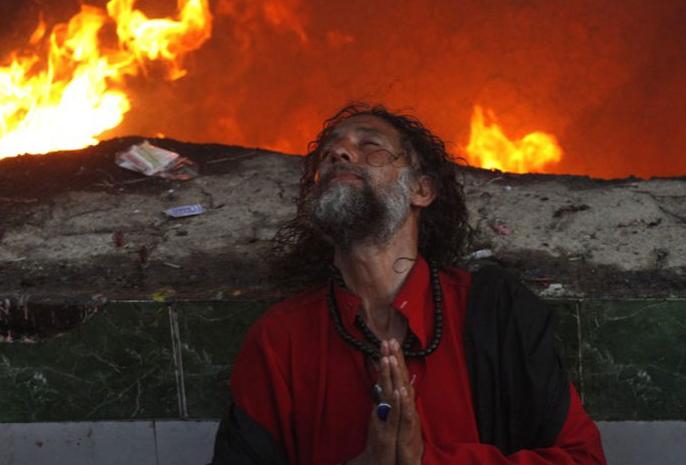 The three-day annual urs celebrations of one of the greatest Punjabi Sufi poets, Hazrat Shah Hussain, commonly known as Madhu Lal Hussain, continued drawing thousands of devotees and enthusiasts from all over the country. 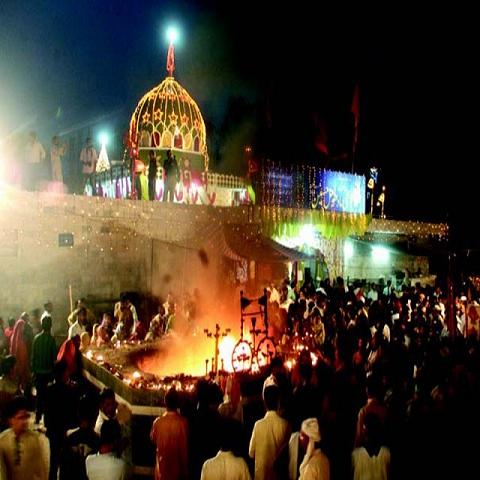 Shah Hussain (1538–1599) was a Punjabi Sufi poet who is regarded as a Sufi saint. He was the son of Sheikh Usman, a weaver, and belonged to the Dhudha clan of Rajputs. He was born in Lahore, and considered a pioneer of the Kafi form of Punjabi poetry.

Shah Hussain’s love for a Brahmin boy called “Madho” or “Madho Lal” is famous, and they are often referred to as a single person with the composite name of “Madho Lal Hussain”. Madho’s tomb lies next to Hussain’s in the shrine.

His tomb and shrine lies in Baghbanpura, adjacent to the Shalimar Gardens. His Urs is celebrated at his shrine every year during the “Mela Chiraghan” (“Festival of Lights”)., Najam Hosain Syed writes in his research article:

In the new Lahore lies buried Shah Husain and with him lies buried the myth of Lal Husain. Still, at least once a year we can hear the defused echoes of the myth. As the lights glimmer on the walls of Shalamar, the unsophisticated rhythms of swinging bodies and exulting voices curiously insist on being associated with Husain. This instance apparently defies explanation. But one is aware that an undertone of mockery pervades the air – released feet mocking the ancient sods of Shalamar and released voices mocking its ancient walls. Husain too, the myth tells us, danced a dance of mockery in the ancient streets of Lahore. Grandson of a convert weaver, he embarrassed every one by aspiring to the privilege of learning what he revered guardians of traditional knowledge claimed to teach.

Then again, fairly late in life, he embarrassed every one by refusing to believe in the knowledge he had received from others, and decided to know for himself. He plucked the forbidden fruit anew.

The myth of Lal Husain has lived a defused, half-conscious life in the annual Fare of Lights. The poetry of shah Husain which was born out of common songs of the people of the Punjab has kept itself alive by becoming a part of those very songs. In recent past, the myth of Madhu Lal Husain and the poetry of Husain have come to be connected. But the time for the myth to become really alive in our community is still to come.

Husain s poetry consists entirely of short poems known as “Kafis.” A typical Husain Kafi contains a refrain and some rhymed lines. The number of rhymed lines is usually from four to ten. Only occasionally a more complete form is adopted. To the eye of a reader, the structure of a “Kafi” appears simple. But the “Kafis” of Husain are not intended for the eye. They are designed as musical compositions to be interpreted by the singing voice. The rhythm in the refrain and in the lines are so balanced and counterpointed as to bring about a varying, evolving musical pattern.

It may be asserted that poetry is often written to be sung. And all poetry carries, through manipulation of sound effects, some suggestion of music. Where then lies the point in noticing the music in the “Kafis” of Shah Husain? Precisely in this: Husain s music is deliberate – not in the sense that it is induced by verbal trickery but in the sense that it is the central factor in the poet s meaning.

The music that we have here is not the vague suggestion of melodiousness one commonly associates with the adjective “lyrical : it is the symbolic utterance of a living social tradition. The “Kafis” draw for their musical pattern on the Punjabi folk songs. The Punjabi folk songs embody and recall the emotional experience of the community. They record the reactions to the cycle of birth, blossoming, decay and death. They observe the play of human desire against the backdrop of this cycle, symbolizing through their rhythms the rhythms of despair and exultation, nostalgia and hope, questioning and faith. These songs comprehend the three dimensions of time – looking back into past and ahead into future and relating the present to both. Also, these songs record the individual s awareness of the various social institutions and affiliations and clinging to them at the same time – asserting his own separate identity and also seeking harmony with what is socially established.

Through this deliberate rhythmic design, Shah Husain evokes the symbolic music of the Punjabi folk songs. His “Kafis” live within this symbolic background and use it for evolving their own meaning.

He believed in love for humanity and his disciples included a Hindu boy Madhu, Mughal emperor Aurangzeb’s brother and several princes. The Hindu boy had left his family for the Sufi, who loved him so much that he put the boy’s name before his own. He was the first Punjabi Sufi whose Punjabi poetry contained words from other languages like Pothohari, Hindi, Persian and Arabic, but his poetry is extremely easy to understand. The Sufi also called himself Hussain Julaha, Hussain Namana, Hussain Faqeer and Shah Hussain in his verses. The theme of his poetry is Knowing God by Knowing Ourselves. He wrote almost 163 kafees and according to researchers, Madhu Lal was a true scholar and intellectual. Madhu Lal died in 1599 at the age of 63 and was buried in Shahdara, but his body was exhumed and buried at Baghbanpura where the Hindu boy Madhu is also buried. Madhu Lal’s famous kafees include Rabba Meray Hal Da Mehram Toon, Mein Vi Jhok Ranjhan Di Jana Nal Meray Koi Challay, Mahi Mahi Kookdi and Mandi Han Kay Changi Han Sahab Teri Bandi Han.

Hussain’s poetry consists entirely of short poems known as “Kafis”, usually 4 to ten lines, designed for musical compositions, to be interpreted by the singing voices. The rhythm and the refrain are so balanced as to bring about a varying, evolving musical pattern… folk songs that draw on the emotional experience of the community…. record the reactions to the cycle of birth and the play of desire against the rhythms of hope , despair, exultation and nostalgia.

Today most of these Kafis are sung, by well know singers and some have even been used as songs in the Indian Film Industry.

All translations are from Najam Hosain’s book quoted below.

Main wi janan dhok Ranjhan di, naal mare koi challey
Pairan paindi, mintan kardi, jaanan tan peya ukkaley
Neen wi dhoonghi, tilla purana, sheehan ney pattan malley
Ranjhan yaar tabeeb sadhendha, main tan dard awalley
Kahe Husain faqeer namana, sain senhurray ghalley
Travelers, I too have to go; I have to go to the solitary hut of Ranjha. Is there any one who will go with me? I have begged many to accompany me and now I set out alone. Travelers, is there no one who could go with me?

The River is deep and the shaky bridge creaks as people step on it. And the ferry is a known haunt of tigers. Will no one go with me to the lonely hut of Ranjha?

During long nights I have been tortured by my raw wounds. I have heard he in his lonely hut knows the sure remedy. Will no one come with me, travelers?

Sujjen bin raatan hoiyan wadyan
Ranjha jogi, main jogiani, kamli kar kar sadian
Maas jhurey jhur pinjer hoyya, karkan lagiyan hadiyan
Main ayani niyoonh ki janan, birhoon tannawan gadiyan
Kahe Husain faqeer sain da, larr tairay main lagiyaan
Nights swell and merge into each other as I stand a wait for him. Since the day Ranjha became jogi, I have scarcely been my old self and people every where call me crazy. My young flesh crept into creases leaving my young bones a creaking skeleton. I was too young to know the ways of love; and now as the nights swell and merge into each other, I play host to that unkind guest – separation.

Oh mother do not .
I belong to Ranjha and he belongs to me.
And the Kheras dream idle dreams.
Let the people say, “Heer is crazy; she has given her-self to the cowherd.” He alone knows what it all means.
O mother, he alone knows.
Please mother, do not talk to me of Kheras.
*The Kheras were a wealthy family. 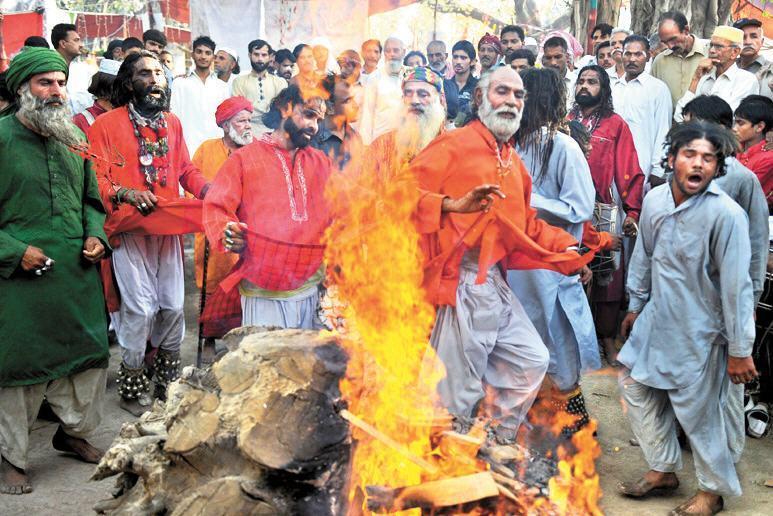 Click here to post a comment
1000 year old Hindu temple in Pak in desperate need of upkeep
Challenging the status quo: Tough decisions need to be made – by Ali Wahab