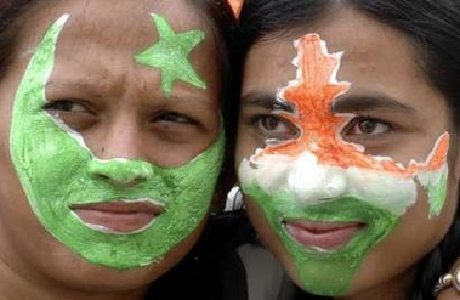 Pakistani cricket fans are on their way to Chandigarh to cheer their team in the mother of all matches taking place at the Punjab Cricket Association stadium in Mohali.

Among them are Pakistani peace activists who will be joined by their Indian counterparts to promote peace. Pakistani cricket fans would have crossed the border without obtaining no objection certificates from Rehman Malik and by passing the Indian government’s newly introduced stringent visa policy. While stepping over the imaginary border line, they will surely notice the well-built, tough-looking border security jawans from both sides, who behind their thick, oiled moustaches, may be hiding their desire to join the cricket caravan. Back home, people will be taking half day off, even if the government doesn’t announce it. The tyre-burning mobs may suspend their ‘noble’ campaign and Karachi’s target-killers may give themselves a much-needed break for the day. Cricketing hero-turned-playboy-turned-The Avenger, has already instructed his Tehrik-i-Dharna brigade to schedule the anti-Nato sit-in well after the World Cup final.

In Mumbai, Bal Thakray may be getting ready to play ball in case Pakistanis attack Mumbai again under the pretext of the World Cup final. Geo TV will probably make a last ditch attempt to get the Supreme Court issue injunction against PTV, Pemra, cable operators or anyone else showing the matches. Spectators will be getting ready for the fight with flags, painted faces and hooters. Cricket yatris traversing GT Road may pass by the legendary battlefields of Kurukhshetra and Panipat, and wonder if the Battle of Mohali will go into the annals of history, as the biggest clash of cricketing history.

The sports rivalry between India and Pakistan could be quite healthy and cathartic. But the passion for cricket in the two countries can reach neurotic propositions. It may be worth checking if the fanatical enthusiasm for the Indo-Pak cricket clash has its roots in intense and irrational hatred for each other, and the desire for victory over the other, is a desire to humiliate and disgrace the ‘enemy’. Even if not widely shared by the people, this unsporting behaviour is evident among the chauvinist lobbies in the media and political circles. It is important to stress that the contest must be restricted to the sporting arena and enjoyed, rather than make it a life and death issue.

Many of us have lost the ability to appreciate and enjoy sports. We see conspiracies everywhere and every issue becomes a matter of national honour. World Cup 2011 victories have given us some breathing space and, a desperately needed feeling of achievement and joy. It is an inspirational sight to see Team Pakistan fighting as a united and determined unit, showing maturity and guts in tough situations. Equally gratifying were the scenes of gracious and whole-hearted support for Pakistan shown by Sri Lankan and Bangladeshi crowds (which, we as a country have done nothing to earn).

Regardless of the results of the match on March 30, let peace be the winner at Mohali. And let us hope that regaining of our cricketing confidence will make us ponder why, this match couldn’t have taken place at the more spacious Gaddafi Stadium, and why our boys are forced to have their home matches, abroad. Let us strengthen our resolve to exorcise the ghost of the 2009 attack on Sri Lankans, let us wake up from the nightmare of 2010 London match-fixing disgrace. We may win or lose the match at Mohali, but the match with the terror team must be won at all costs.