Related articles: How to kill the Shia snake: Letter from brother Abdullah – by Hakim Hazik

Zardari’s was elected by popular vote, not by anti-democratic forces

By Omar Khattab in Islamabad 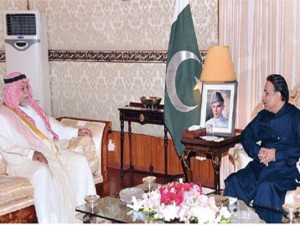 When on 27 March Prince Bandar bin Sultan bin Abdul Aziz Al Saud met President Zardari bin Hakim Ali Bambinowala, the former had just one question to ask: Will Pakistan stand by Saudi Arabia in the face of present popular demands for democracy in Bahrain and Saudi Arabia? “Yes,” was the clear-cut answer by the ever-smiling Zardari.

If only Zardari had asked the Prince this simple question: “Who are the people you wish to crush?”

Alternatively, the Prince might have used a diplomatic register and said: “We want to deal with criminals who plan to undermine Islam.”

What if Zardari had asked: “What about me? I am a Shia too.”

The Prince very well knows that Zardari is himself a Shia. I guess he must be saying in his mind: “Dude, I am here to recruit your support to kill your fellow Shia brethrens and your situation is no more than that of a tissue paper which will be used and then thrown away!”

Nevertheless, this did not happen. Zardari was too cowardly and too obsequious to put the right question to the Prince. Had he been a man of honor, he would have asked this much: “Why did your King Abdullah call me a rotten snake head? And now how can this rotten head (which he wanted to be chopped off) be of help to him?”

There are a number of mosques in Pakistan which are directly financed and administered by Saudi princes. These mosques spread the most venomous propaganda against the Shias. One of such mosques recently issued a death fatwa against Sherry Rahman. The sovereign Pakistan has never been able to regulate these wicked dens of Islamofascism.

Only two weeks before, the Pakistan Army recruited 1,000 “security guards” for Bahrain. The only task of these guards is to kill the Bahrani Shias who are demanding their natural, democratic rights. But Zardari, the supreme commander of the armed forces of Pakistan, is so cowardly that despite some protests in the media such as Let Us Build Pakistan, he did not even take a token notice of it.

Zardari, just like all Pakistanis, knows that the Shias in Kurram are routinely killed by the Taliban whose supporter Saudi Arabia and Pakistan Army’s Ziaist generals are. But he has never taken an action; never said even a word. Why is he doing it? Has he no compassion for the Shias? The answer is very simple: He wants to stay in power at all costs. Let the Shia blood give boost to his viability as president. He can do and play politics over the name of his wife. By unquestioningly and unequivocally acceding to the demand of Prince Bandar, he has amply shown that he can sell anything and anyone at his disposal just to stay in power. If only he had realized that he became president through the popular vote ONLY; otherwise, the Army and Saudi Arabia did not want to see his face (Just read some of the wikileaks about General Kiani and King Abdullah.). Now that Zardari has decided to become an ideological pimp of the Ziaist generals and the Wahabi Saudis, his days are numbered. He will be used and then consigned to the dustbin of history and people will refer to him as fondly as they do when the name of General Zia ul Haq is mentioned.

The least the PPP government could have done was not to meet Prince Bandar. But Zardari, Yousuf Raza Gillani, and Rahman Mallik were dying to meet and suck up to him. But no. Insecurity, greediness, and shamelessness are a lethal combination.