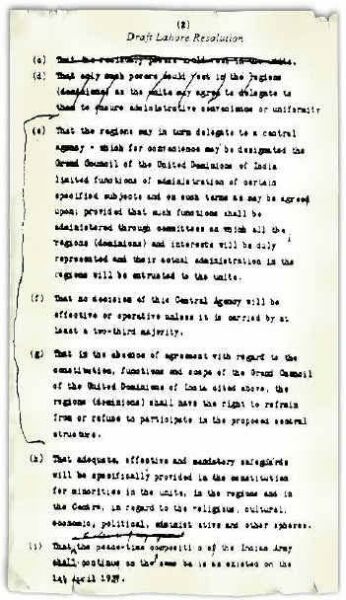 As 23rd day of March is approaching, Pakistanis are warming up for another holiday to celebrate the Pakistan Day in commemoration of the historic passage of  the Lahore Resolution ( also known as the Pakistan Resolution) in 1940 by the working committee of all India Muslim league. The Lahore Resolution, actually, formulated the creation of the state of Pakistan. It is only text that was discussed and agreed by the leaders of all corners of Indian sub-continent under the leadership of Muhammad Ali Jinnah. It is the only document that can be referred as the “father document” of Pakistan.
Although the resolution being considered as the most important document in the history of Pakistan Movement (equivalent of United States Declaration of Independence), it has rarely been seen in its entirety by the people of Pakistan. Unlike US declaration of independence which gets published by many major newspapers of the US on July 4th every year, the Lahore Resolution has never been published on March 23rd in any of major Pakistani newspaper. Therefore, many Pakistanis are not aware of what was actually proposed in the Lahore Resolution. Here, I am producing the text in its entirety for the people who haven’t seen it.

It is a concise but a through declaration consisting of five paragraphs. The initial two paragraphs lay out the context for what will be proposed in the later paragraphs. Paragraph three  essentially proposes the formation of “independent states” in Muslim majority areas of Indian sub-continent, and paragraph four instructs that the constitutional “safeguards” should be enacted to protect the minorities in these “regions” as well the Muslims who are a minority “in other parts of India”. Paragraph five tasks the working committee to start working on a “scheme of constitution” for all the proposed “regions”(states).
Reading the resolution in today’s circumstances, draws attention towards the two important points in the text.
First, the phrase “independent states” is used instead of “independent state” in the content. The presence of “s” with the word state in the original text becomes significant in context of 1971 secession of East Pakistan to become Bangladesh. It has been argued that the initial intention was to form many individual states in the areas where Muslims are in majority rather than single state for the Muslims of India. The fact that the resolution was presented by a Bengali nationalist, Fazal-ul-Haq, adds weight to the argument that according to the resolution East Pakistan was never supposed to be the part of Pakistan. This leads to the question that what made the founding fathers to change their mind from asking for “independent states” to ending up with one state? How the debate of “Sovereignty First,  Then, Perhaps, Confederacy” or  “Confederacy First,  Then, Perhaps, Sovereignty” finally settled with the latter. I am in middle of reading various articles addressing this issue, and once done, I will write a complete post on the argument.
Second, mandating the “safeguards” to be enacted to protect the minorities in the “regions” that later will become Pakistan and presence of a whole paragraph in a very short document addressing the issue of minority rights shows that how concerned the founding fathers were about the subject. Has enough been done to achieve what the founding fathers wanted for the minorities living in Pakistan?
But what strike most is the democratic and the revolutionary nature of the resolution. The resolution came after thrashing of the Muslim League in 1937 elections where it only won few seats (3 out of 33 seats reserved for Muslims in Sindh, 2 out of 84 seats in Punjab, 39 out of 117 seats in Bengal and none in NWFP) and within 6 years of time  it changed the whole scenario with the overwhelming success of Muslim League in 1946 elections (425 out of 496 seats reserved for Muslims) which the League ran on the platform of  creating a state of Pakistan. The momentum generated by the passage of the Lahore Resolution actually allowed the Muslims to build a huge support and rally the Muslims of the sub-continent for the demand of  independent state of Pakistan.
To conclude this up, the text of the resolution should be printed in its entirety more often  (especially in school textbooks) so that every Pakistani should know what actually was proposed on March 23rd,1940 and how important  the resolution was in the making of Pakistan.