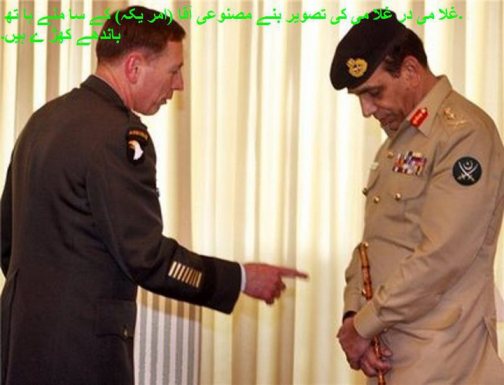 I am writing this letter to personally congratulate you on your heroic efforts for working towards the independence of the country that has vastly benefited us over the past 60 years.

By the way, your country deserves praise for its exceptional half wittedness which we will continue to exploit for eternity.Soon after independence our demands of military equipment and economic aid were fulfilled by our participation in CENTO and SEATO. In the quest for dollars & Johnnie Walker, Ayub Khan had even extended a welcoming offer to your military officials, encapsulated in his words “Our Army can be your Army if you want”.

For the next thirty years, we played a significant role towards helping your nation in toppling the Red Army.  Later we decided to continue with our nuclear program (Thanks to Abdul Xerox Khan) in order to counter the “Hindu Baniaa”. Soon we were slapped with economic and military sanctions and as a result it was difficult to sustain the Kashmiri Jihad against the “Hindu Baniaa” on the east and the popular “Pedophilia Network” (Afghan Taliban) on the west. But Alhamdulillah 9/11 happened and we became indispensible for the world again. A total of $12.5 BN of our debt was rescheduled and we were blessed with $10 BN, we got export incentives in the form of greater market access to the EU, debt rescheduling and others in the form of grants and Saudi investments. These were given to us to buy our support for the War on Terror, we were supposed to cooperate in hunting down Al Qaeda, Taliban and all other affiliated groups but Voila!!!!!!!!!! Kudos to your government for its gullibility; while it was engaged in ruining Iraq, it blindly trusted us but we continued to support these groups and didn’t even take the minor step of  declaring Al Qaeda a terrorist organization (Pakistan is the only country among War on terror participants not to have declared Al Qaeda a terrorist outfit).

After Mumbai attacks and the subsequent pressure of “Hindu Baniaa”, Langley realised that we were no longer to be trusted and hence it covertly activated a cell in Punjab to eliminate the leaders of LeT. Raymond Davis was assigned to provide security and surveillance for the case managers of that cell. No hard feelings George, but this was never acceptable to us as LeT has always been instrumental in countering the “Hindu Baniaa” and your nation has failed to figure out that our highest priority has always been “Ghazwa-e-Hind”.

As soon as we received information of Davis’s operation in Lahore, we sent two local thugs to terminate him but bad luck George as Davis ended up killing them and was later arrested by the inept humpty dumpty Punjab police.

Raymond was later released after Langley accepted our demands (in relation to greater role in Afghanistan) through tough negotiations and the case was settled by exploiting the second best selling product in our country after sex known as Islam.

But you know George! One thing we are proud of is that despite our major complicity in drone attacks, releasing Raymond Davis, “missing persons case”, ruining our economy, nurturing terrorist organizations, promoting extremism etc. we are still the highest ranking and the most favourable institution in the country Nelson Research Report.  This is mainly due to the stupidity of our people, who believe that earthquakes and Tsunamis are brought about by a research facility called HARRP, who love to see the cantankerous Shireen Mazari and the obnoxious Fareed Paracha on Talk shows, where the media, public and intellectuals value the analysis of megalomaniac freaks like Zaid Hamid and Ahmed Qureshi.

Please also show this to the other founding fathers of your nation especially to Thomas Jefferson and Benjamin Franklin. I am sure this will cause them to roll in their graves.

Another important factor that helps us maintain the highest rating in the country is due to the role played by our hyperbolic media where the popular talk shows never question our alliance in drone attacks with the Americans and never wonder why we never formally protested against these attacks just like we did against Kerry – Lugar bill by holding a conference of 122 Corps Commanders at GHQ. This idiocy of the media helps us in directing public opprobrium towards the civilian government so that they end up blaming the government and thus we are always rated higher than all other institutions.

Sorry George but Anti-Americanism has been the key towards our success in terms of negotiations and propaganda campaigns. We fund Anti-Americanism to achieve valuable objectives in order to keep your government on its toes. Pakistan cannot make decisions favoured by Americans such as withdrawing the support from terrorist groups (JUD/LeT, Haqqani/Taliban). Through our successful propaganda campaigns, it is widely believed in Pakistan that the organization TTP, which is responsible for killing thousands of Pakistanis, is funded by Langley. This helps us create the difference between the Good Taliban (killing Afghans & Americans) and the Bad Taliban (Killing Pakistanis). Even during the Raymond Davis episode, we planted conspiracy theories connecting Davis to the TTP; we also fabricated evidence of their connection through the Punjab Police. This was enough to convince the public, who is foolish enough to not even have questioned as to why the Pakistani army never take any action even if there was solid proof of Davis working with the Bad Taliban.

We are also very proud of our judicial system which has never questioned any of the ISI’s activities. There are innumerable people languishing in Pakistani jails for years waiting for their cases to be heard but it only took a few days for our judges to come to a decision in Raymond Davis’s case. Salman Taseer, the governor of Punjab, was recently assassinated by a virgin fanatic but to this day no final verdict has been reached by our judges even though the assassin confessed to the killing whereas Raymond Davis only confessed to killing in self defence.

George, we want you to understand that we are not Islamists, we are looking out for our own interests, supporting Islamist extremists is one of the ways to achieve those interests. In fact, we are similar to your government. We exploit Islam the same way your government did 30 years ago against the Soviets. It serves our military and political objectives just as well as it did for your government.  We also have similar interests, we too like a drink or two and we enjoy Megan Fox and Angelina Julie just as much.

Thank you again for leading the independence movement.

Click here to post a comment
Islamic mob tried to burn down Church in Lahore
PCS officers in Punjab deserve respect and justice: PML-N & DMG is an urban elitist union made in hell