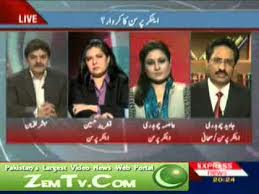 BY golly some of our great anchors are something to behold after the springing of Master Raymond Davis from jail and his departure for lands more salubrious than the Land of the Pure.

They are actually foaming at the mouth; trembling with white rage; and consumed with an anger they know not what to do with.

Whilst they have never been known for good manners, they are ever more discourteous with those of their guests that dare to say something at variance with their own fixed ideas — rudely shouting down senior politicians who have even undergone imprisonment and exile for their democratic ideals — and who challenge their striking of untenable attitudes such as ‘we are a nuclear power, so why did we let Davis go’, and other such tripe.

A very big reason for their outrage and indignation is, surely, their sudden realisation that they were made utter fools of, and used by the Deep State to peddle an extreme form of ‘ghairat’ and so-called nationalism, read ‘sovereignty’, to ‘heat up’ the street and thereby to facilitate negotiations with the Americans.

Well, serve ‘em right I say. And about time they got their comeuppance for flogging bizarre theories on the power of this country to influence matters important to the rest of the world, particularly to our greatest benefactor; to stand tall when we really are midgets; to spit in the face of those that fill our very wish such as advanced weapons of war (which, by the way, are the major reason that the bright young things, fake American accents and all who propagate the height of nonsense for the Deep State, have the temerity to say what they do); and to stare down those who satisfy our every whim.

Whilst I can hear the loud gnashing of teeth by the hawks and the hawkesses of the Ghairat Brigades (hereinafter referred to as GBs), I would beg them to be honest with themselves and get real for a change.

Let us take the deadliest weapon we have in our great arsenal and which should petrify the world according to the GBs: our nuclear bum. What pray, do the GBs suggest we do with our not one, not two, but many, many bombs, when it comes to dealing with the US, say on the matter of a Raymond Davis?

How in God’s name will all our bombs help? I am being ludicrous here but let me say it for the sake of bringing the GBs down to earth. Do we say to the Americans that if our writ is not respected and our sovereignty (or what we think is our sovereignty) not valued, we will lose a bomb or two aboard one of our many accurate and long-range missiles? Upon who, pray? Bagram airbase? Kandahar airbase?

Do the GBs know the costs of such an imbecilic and cretinous action? Can they even countenance what will happen to this country once we have shown our ‘sovereignty’ and our ghairat via our bombs of which we are so proud and which form the bedrock of our pretensions of being a superpower?

Coming back to Davis and many of our infuriated anchors, we now see a blame-game unfolding with the enraged ghairatmand media demanding answers; even from those holy of holies the Mother of All Agencies and the army, in that order. Internet sites suspected of representing the interests of the establishment are going to the extent of suggesting that money changed hands at the highest levels, both uniformed and ‘bloody civilian’.

This is highly unfair and damaging and downright silly. To even suggest that someone in government would take money from the Americans to release Davis is preposterous and unkind, and let me say it again, idiotic.

There were too many actors involved in this matter; and while the ISI and the army called most of the shots — perhaps going overboard in initially priming up the anchors who have now turned upon their masters much as the Taliban turned upon theirs (!) — the Americans were talking to too many people in the top echelons, both uniformed and ‘bloody civilian’ for money to have changed hands quietly.

Let bygones be bygones, friends, for crunch time is here with a bang. Let all of us resolve to stand together. Let the ISI mend its ways, make friends with the lay people of the country including notably the Baloch who feel so hard done by; leave ‘media management’ to the ISPR alone and politics to politicians.

Most crucially, let me say for the umpteenth time that the Deep State must finally realise that murderous terrorists can never be a country’s ‘assets’ and that this country’s borders can never be expanded to include Afghanistan.

Let us divert more funds to education and healthcare so that we have a happy and contented populace, the real assets of any country. Then we can and will proudly stand behind our army and our ISI and deflect anything the furious anchors throw at them!